How about watches today. A subject that we will tackle even more in the future. The arrival of the new Flyboy Lafayette Chronograph from AVI-8, currently on presale, gives us the opportunity. I have had the chance to test it over the past few weeks and I share my impressions with you.

Before we talk about the Flyboy Lafayette Chronograph review, let’s talk about where it came from. The English brand AVI-8 may still be a little unknown on this side of the Atlantic, but its aviator-style watches will seduce you. The brand name pays homage to aviation by using the aeronautical code “AV nº”, which designates attack aircraft for vertical takeoff. In short, you probably suspect that the military side is present in most of their models, think of the different dials that reproduce those of different devices. 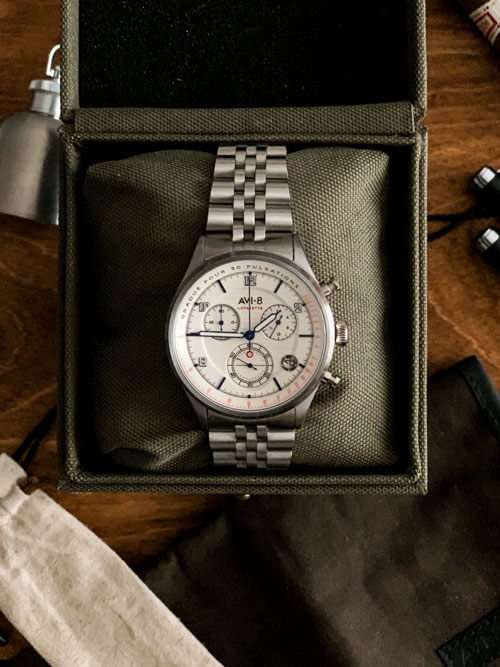 The watch is named in tribute to the Lafayette Escadrille. The latter was famous for being a unit of American volunteer fighter pilots who served under French command in 1916 during the World War I. The name of the unit pays homage to the Marquis de Lafayette, French hero of the American Revolutionary War.

Apart from the initial base squadron, other American volunteers would join the French air effort and their presence marked them as members of the Lafayette Flying Corps. The pilots on duty came from various backgrounds. Some were idealists and patriots, while others were adventurers. Nevertheless, they all sacrificed their lives and showed immense bravery and courage in volunteering in the face of America’s neutrality during WWI.

After the war, many Lafayette and Flying Corps squadrons served as the founding fathers of American combat aviation, with the formation of the US Air Force.

The tribute of AVI-8 to the Lafayette Squadron is a true compliment to the spirit of the Flyboy, the colloquial term used to describe these dangerous brave and patriotic warriors from the sky. 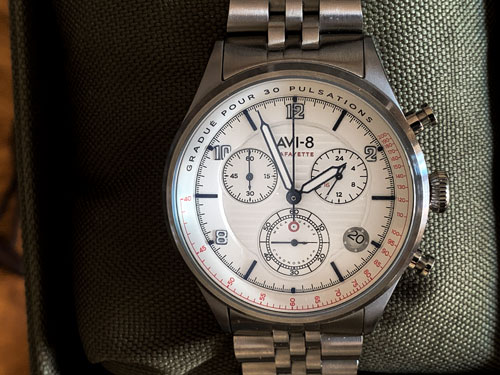 The watch I usually wear is an Apple Watch, but for certain occasions, more serious and official, I find that it doesn’t fit well, and let’s face it, we like to change our looks. The arrival of the Flyboy Lafayette Chronograph from AVI-8 was welcome. With this watch designed for gentlemen, we notice design codes recalling the time from the late 1910s to the 1920s, fused with practical and modern watch mechanisms and precision. With its stainless steel case, it is obviously heavier than my Apple Watch at 150 grams versus the 60 grams on the Apple side, but it is really comfortable.

In terms of size, the case is 42 mm in size, which is very reasonable, especially for me who does not have a very large wrist. We also like that the case is surmounted by a hardened mineral lens with a sapphire and anti-reflective coating. The movement is a Japan Meca Quartz Chronograph with date and a 24-hour clock.

Its “onion” style crown is inspired by the first trench watches made from traditional pocket watches. These watches will eventually form the shape and design of pilot watches par excellence and will also serve as essential instrumentation for air combat. Piston-type pushers operate and engage to easily reset the chronograph. 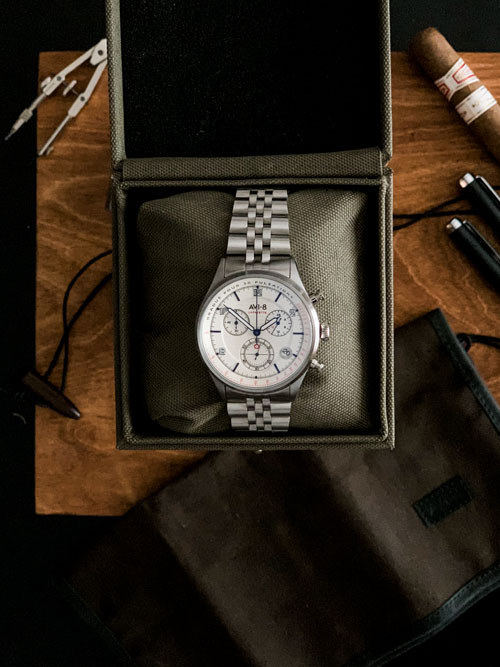 They are clearly visible fonts inspired by art deco that mark the hours and, although the dial is calibrated exhaustively, it is extremely easy and quick to consult.

The subtle horizontal lines of the central dial layer are drawn from the motif of the wings of a Nieuport 17, an airplane flown by numerous members of the Squadron. A pulsometer is delimited on the dial tension ring with a nod to the French elements imbued with the origin and inspiration of this watch. Besides, it is in French that the text “Gradué pour 30 pulsations” is written on this watch.

The syringe as well as the hour and minute hands are filled with details on the chronograph seconds hand where a French Air Force cockade has been carefully applied to the brand’s commitment to reflect history and the narrative in detail of the watches.

The back of the case is carved with the famous Native American head badge of the Squadron found on Spad VII and other planes they fly. The AVI-8 brand has long sought to reference history through the prism of modern watchmaking and rightly the choice of a Japanese High Meca-Quartz Sweep sweep the movement of the hand chronograph does exactly that.

Providing pinpoint split time accuracy to one-fifth of a second, the behavior of the movement as automatic with the precision of quartz makes it a very satisfying timing experience.

While watches around the 1920s did not have a Jubilee style metal bracelet, its choice is perfect and makes the watch even more pleasant and perfect for connoisseurs. It is also very easy to adjust and will make your watch fit perfectly with your most chic shirts.

The date frame is inspired by the speedometer on the dashboards.

The price of the watch is priced at $ 285 USD, or nearly 400 Canadian dollars