A dream evening with the Chianti Classico wines

The first edition of the competition with Chianti Classico wines was held at the ITHQ (Institute of Tourism and Hotel of Quebec) on July 20th. This initiative, launched in 2017 by the Consorzio Vino Chianti Classico, aims above all to promote the distinction and influence of the appellation from the wine-growing region of the same name. 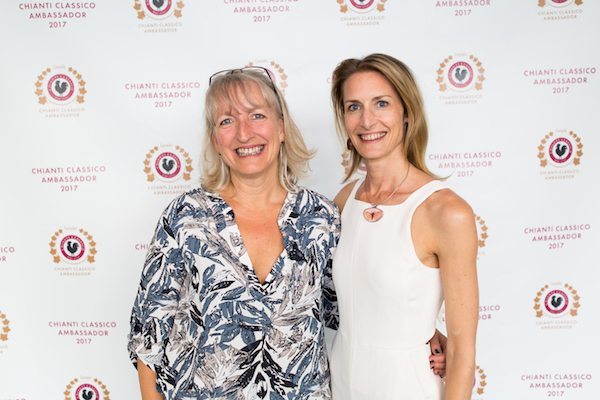 For the occasion, several producers from the Chianti Classico region had traveled to Montreal and took part in the Master Class Chianti Classico that preceded the competition. More than 50 people from the restaurant industry were able to benefit from the knowledge of Michaela Morris, wine editor and educator, and Véronique Rivest, sommelier, wine columnist and owner of the Soif wine bar in Gatineau who facilitated the seminar with The participation of producers. My friend Sophie Allaire, sommelier at the Bistro Accords, told me it was a very formative day for her. 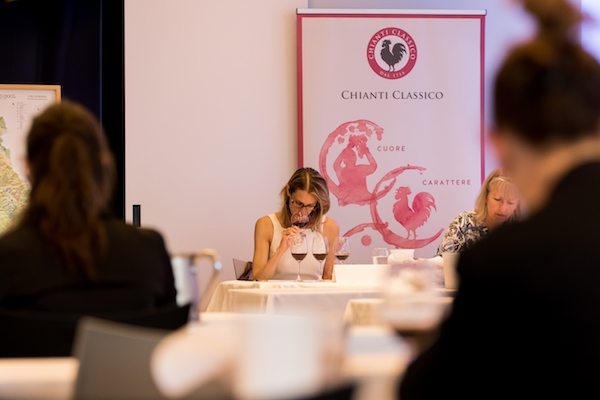 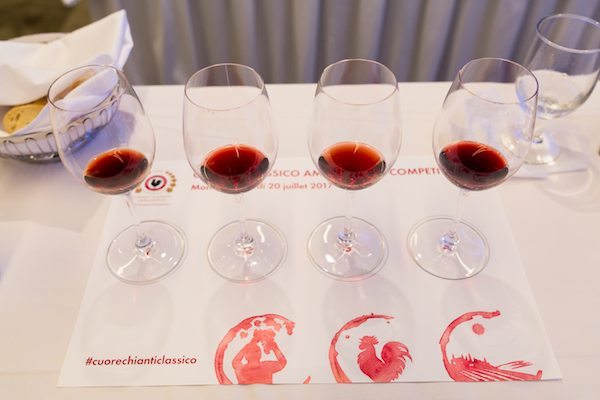 This was followed by the first competition with Chianti Classico wines with the participation of seven pre-selected professionals, consisting of a blind tasting test followed by an oral test for the 3 finalists selected to test their knowledge On the wine-growing region. 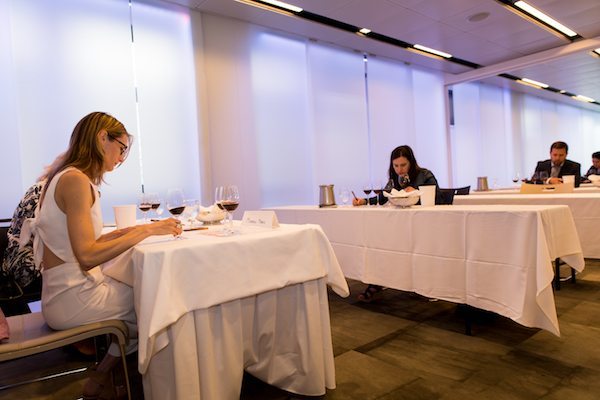 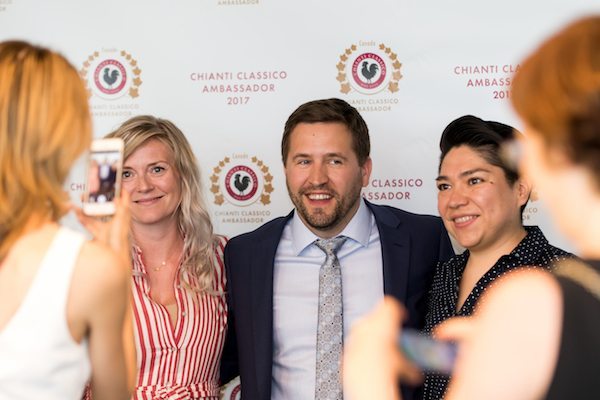 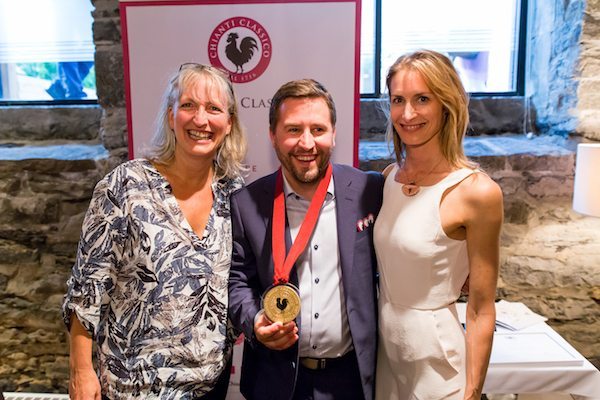 Kler-Yann Bouteiller, a sommelier, a teacher at the École hôtelière de la Capitale in Quebec City and a columnist (Exquis Magazine, Québec Scope, Prestige), who won the Chianti Classico Wine Ambassador Award for the year 2017. His qualities as a taster and his knowledge of this well-known appellation of Tuscany were recognized during this competition. “The main purpose of my participation in this competition was to learn more about this wine region. So much remains to be discovered. It will be my pleasure to share my discoveries throughout the year and to work in collaboration with the Consorzio Vino Chianti Classico “, explains the winner. 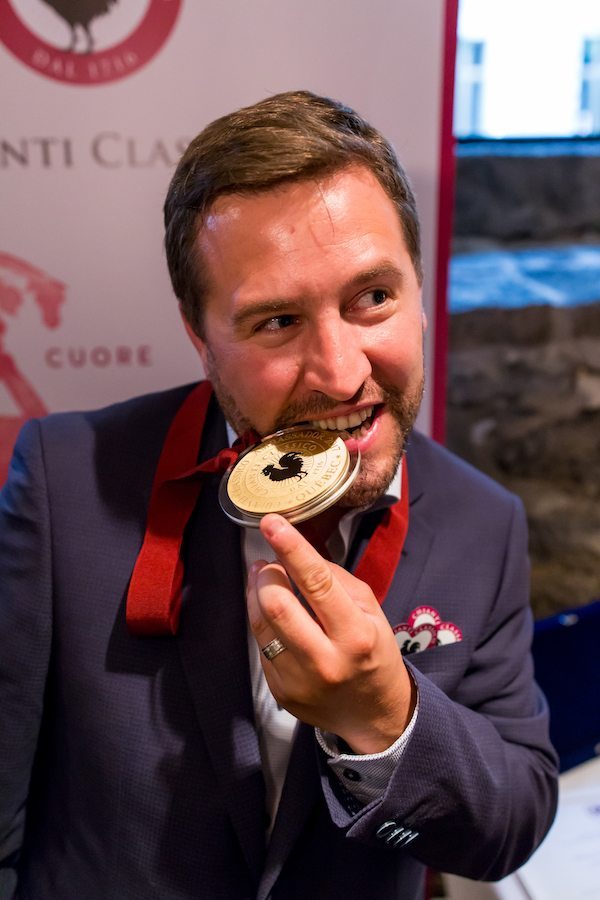 The Consorzio also wishes to highlight the performance of the two other finalists, Mandi Robertson and Ana Bertha Gallegos Barcenas, who stood out during the events. Sergio Zingarelli, President of the Consorzio commented: “We have imagined this contest as a reward for officially recognizing young sommeliers and enthusiasts of Le Coq Noir throughout the world with a certificate issued by the Consorzio Vino Chianti Classico” . The mission of each ambassador Chianti Classico will be to make the region Chianti Classico, its territory, its history and the commitment of its producers. The first three ambassadors will be selected on the Canadian market, a market that has given us great satisfaction over the past few years in terms of knowledge and appreciation of our products. Once elected, the three Ambassadors Chianti Classico (from British Columbia, Quebec and Ontario) will also be invited to participate in an educational trip to deepen their knowledge of the territory of the Black Rooster.

The next regional Chianti Classico wine competition will be held in October in Vancouver.

The second Quebec edition is scheduled for Spring 2018. 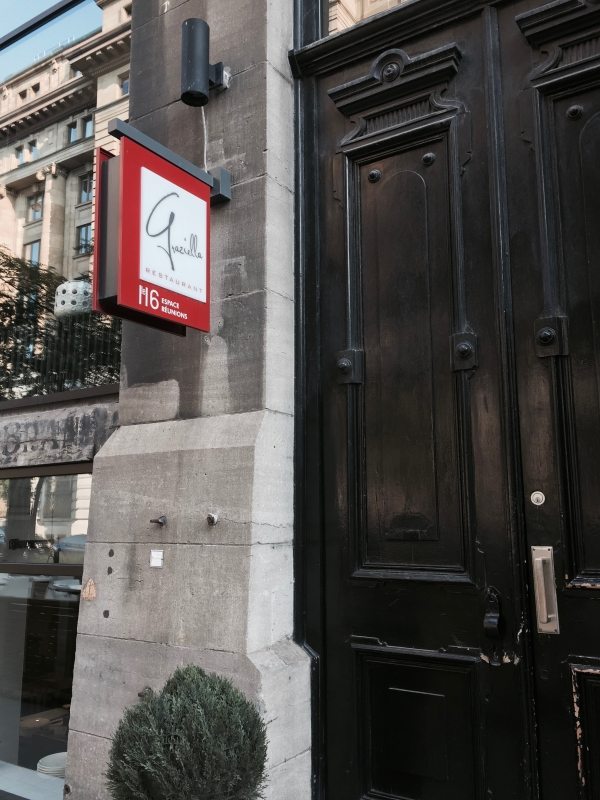 It was during a dinner at the restaurant Graziella, which I had the chance to attend, that was unveiled the winner Kler-Yann Bouteiller. This was my first time in Graziella and I was not disappointed, on the contrary, I was really impressed. We are at first welcome with a franciacorta a sparkling wines of high quality elaborated according to the traditional method in Lombardy, in the north of Italy (Source: SAQ), the superb Ca’del Bosco Cuvée Prestige Franciacorta 2016, it was My first franciacorta, and it was really excellent, nothing to envy a Champagne. 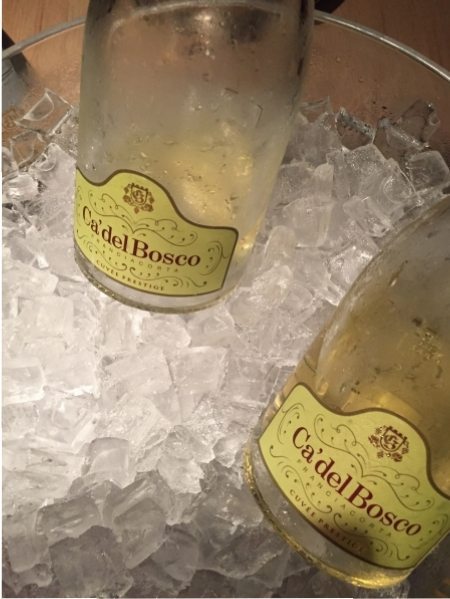 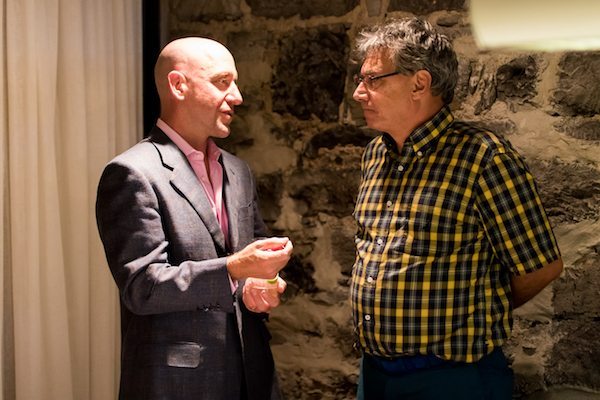 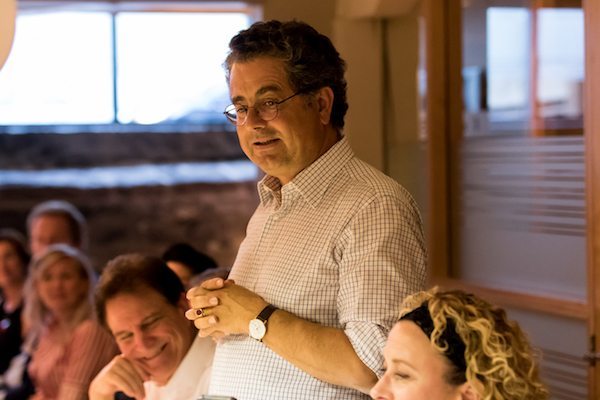 It’s an honor for me to be sitting at a table with these great Italian wine, it’s almost stunning so much these people are important on the world wine chessboard. And I have the chance to taste their wines. C, people are so simple and generous that one comes to develop almost friendships. And the whole thing really makes you want to go to Italy (my dream). 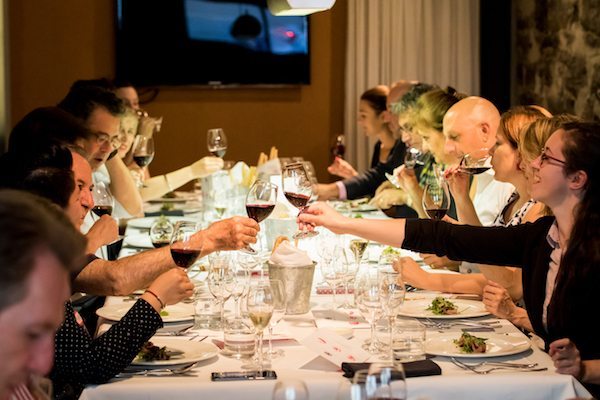 Here we are at the first flat, the Tagliata of red tuna in the style of Puglia, an Italian region, accompanied by Le Chianti Classico 2013 The Corti de Principe Corsini (not offered in SAQ). You saw the owner of Principe Corsini, Duccio Corsini, a little higher up who welcomed us to this meal. A tuna cooked to perfection, flavors aligning perfectly with the wine, an excellent marriage between the two to begin the evening. 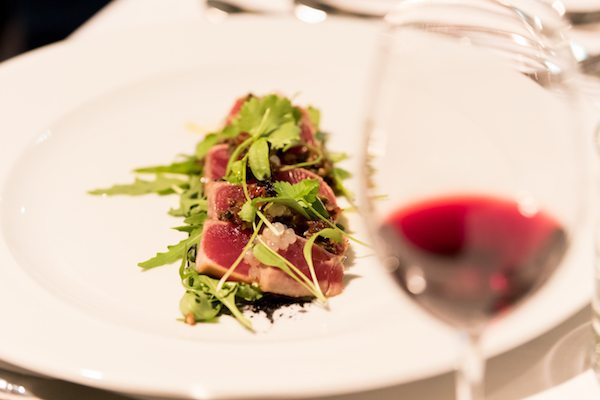 Tagliata of red tuna in the style of Puglia
Crédit: JF Galipeau 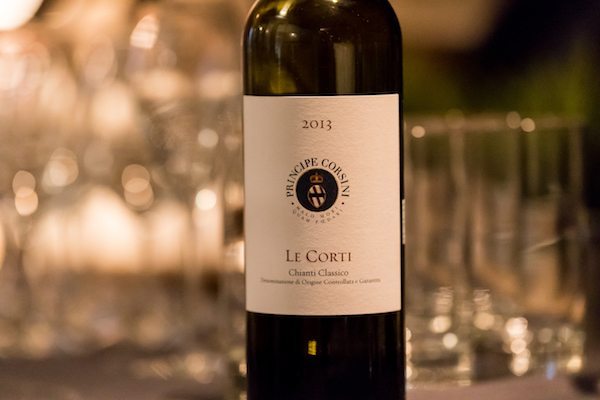 We continue with Tortelli cheese Crescenza, wild mushroom stew and tomatoes. This rich dish is accompanied by the Chianti Classico 2013 Fontodi. 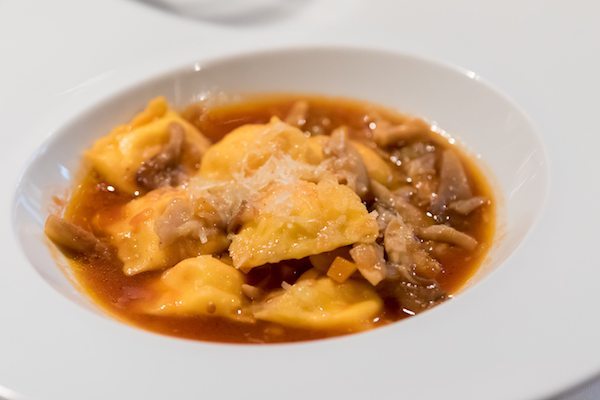 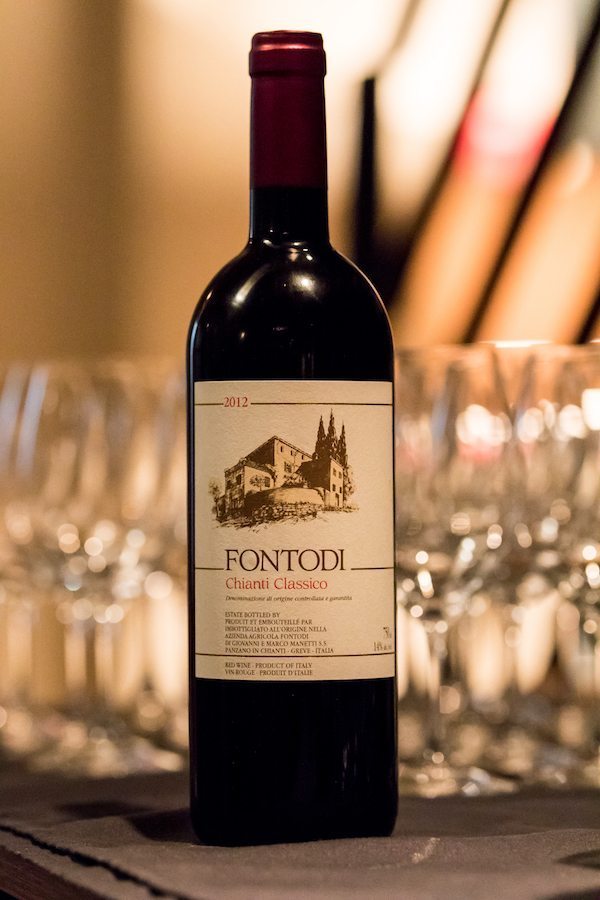 We continue with grilled beef steak, Piedmontese rocket, Pecorino di Fossa shavings paired with the last two wines, the Chianti Classico Riserva 2014 Castellare (of which I do not have a picture) and the Chianti Classico Riserva 2013 Brancaia , The one you see below. Again, the latter were perfect. The chords, even if they were different wines, were in harmony with the counter-fielt, textures, cooking, little vegetables, wow. It was a real delight. 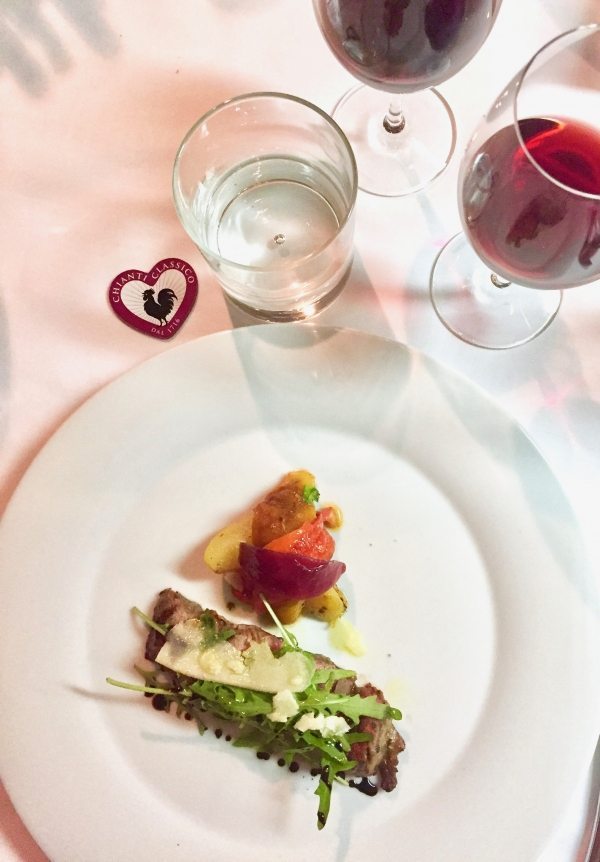 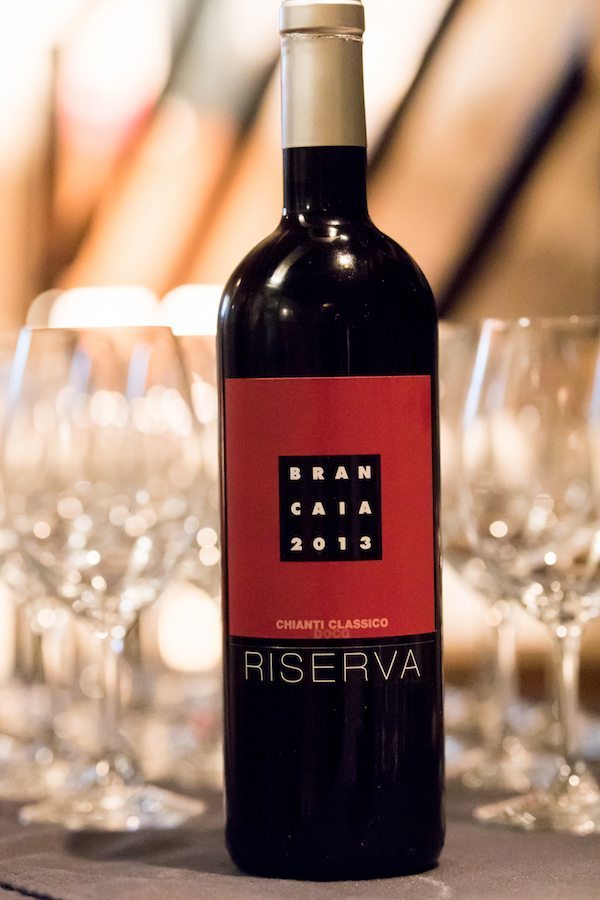 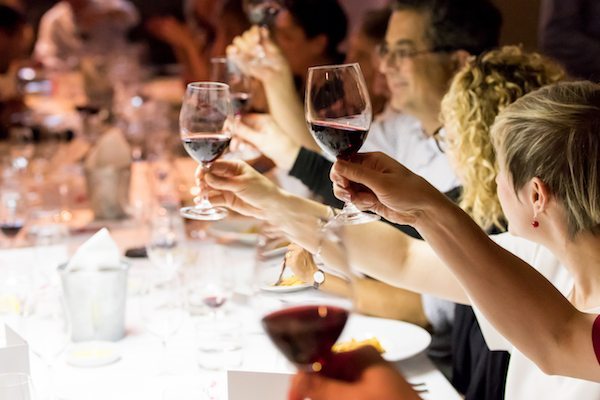 And to finish off the evening what better than a cappuccino with a puffed stuffed with ice Gianduja, caramel and hazelnut. This dessert is to die for so good. And the cappuccino, made by Italian, wow. How not to love, the evening was just perfect. It made me want to learn more about the wines and the region of Chianti Classico. Soon, perhaps, who knows? And there is this story of the cock that I will tell you in another article soon 😉 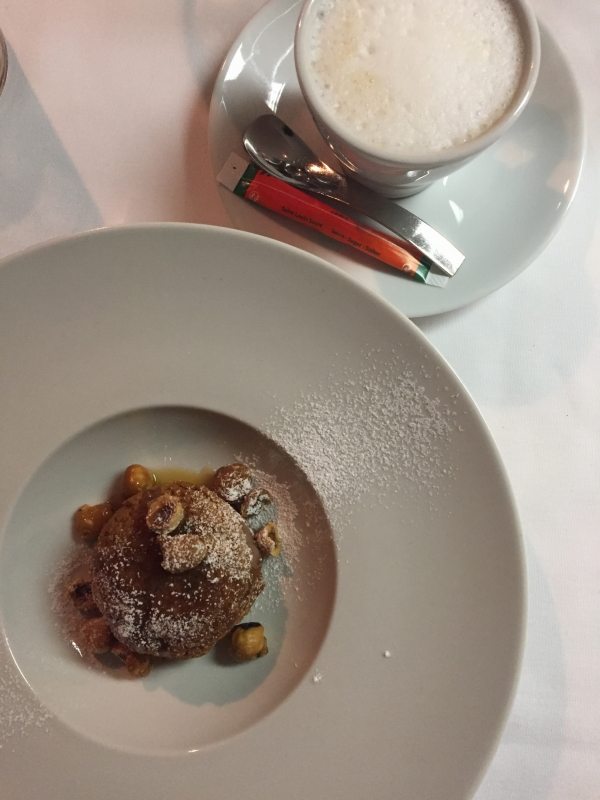 Chianti Classico Wines: What is it?

The Consorzio Vino Chianti Classico was founded in 1924 to regulate and promote the Chianti Classico D.O.C.G., the historical wine region composed of 172,900 acres in the heart of Tuscany. Its limits were formally defined in 1932, the word “Classico” was attributed to the appellation created in the territory where the Chianti wine was originally produced and the only one that today can bear geographically this name . With 560 members, the Chianti Classico Wine Consorzio now represents 96% of the total denomination and has an up-to-date and well-structured professional organization responsible for the mission for which it was created: protection and valorisation Chianti Classico wine and its brand. More information on the Chianti Classico  this way!.

And what is your favorite Chianti Classico wine?

Three wines to start the summer to discover