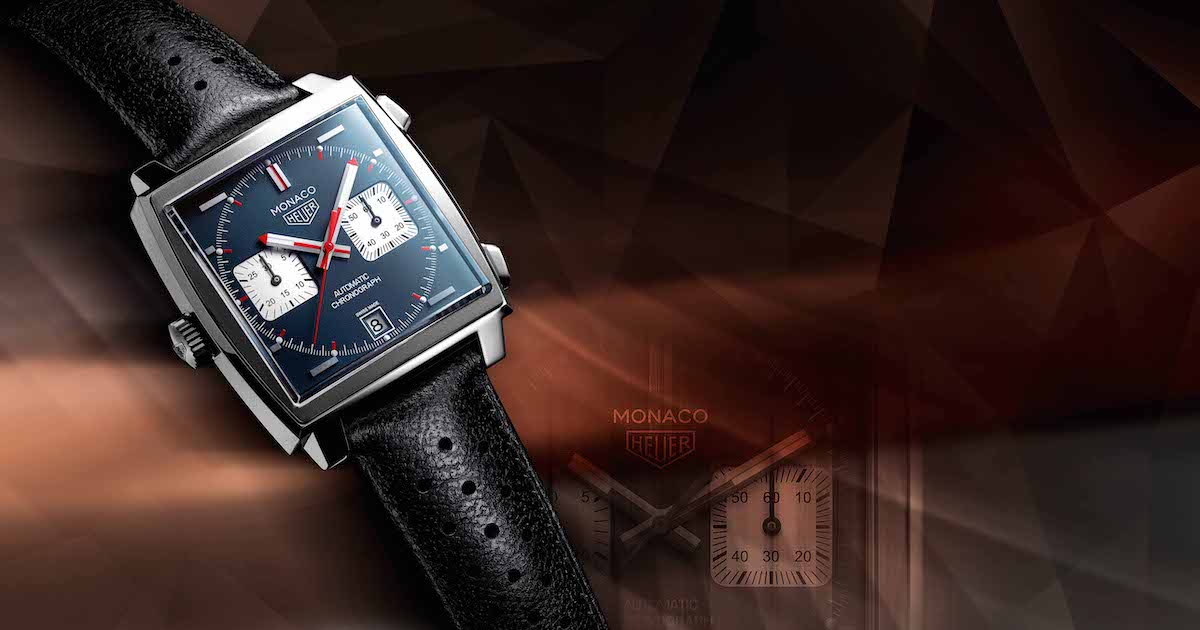 It’ in 1969 that Heuer launched the Monaco, a unique watch that became famous thanks to its exceptional design and its unique technology. Fifty years later, TAG Heuer celebrates the anniversary of the iconic TAG Heuer Monaco by launching new editions of this legendary watch, and organizing events around the world and dedicating a book to it.

Looking back on 50 years of the TAG Heuer Monaco

As often happens with the iconic design classics, the Heuer Monaco (TAG was not part of the company name at the time as we learned from the TAG Heuer exhibition “Museum in Motion”) divided the opinions. When it is launched at simultaneous press conferences in New York and Geneva on March 3, 1969, most people’s reactions were less than enthusiastic. Every aspect of the watch’s design was radical: the metallic blue dial, the red and light blue hands, the square case and the placement of the crown on the left-hand side. . Today, that’s what makes it so popular. 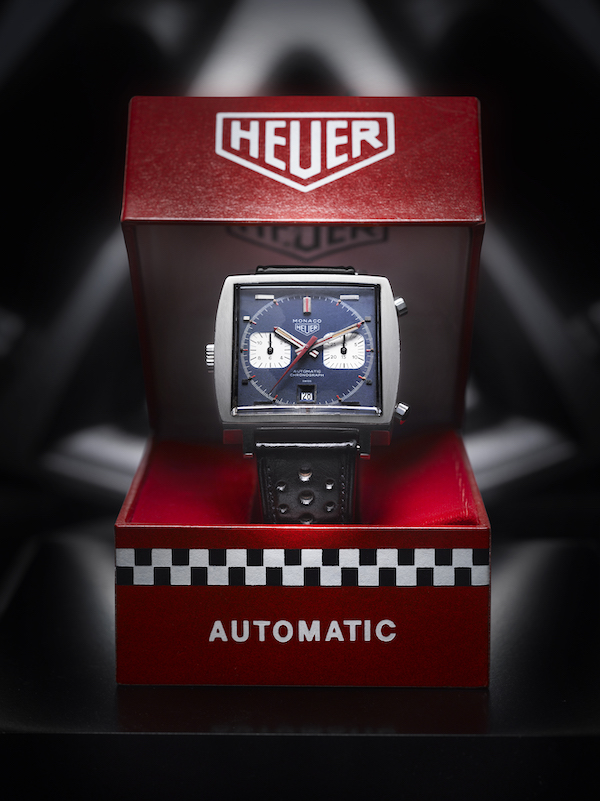 “We wanted to create an outstanding and innovative product, something avant-garde,” said TAG Heuer Honorary Chairman Jack Heuer. “When I saw the square case, I immediately knew it was something special. Until then, square cases were only used for dress watches because it was not possible to make them water-resistant. We went forward with this unconventional design and negotiated the exclusive use of this revolutionary case for the Monaco wrist chronograph.”

The Monaco’s daring design made it instantly recognisable, and it was the perfect complement to the advanced technology the Swiss watchmaker presented at the same time: the first water-resistant square case and the Calibre 11, the first automatic-winding chronograph movement. The Calibre 11 was the result of three years of close collaboration between watch brands Heuer, Breitling and Hamilton, and became the first automatic chronograph. The then CEO of Heuer, Jack Heuer, was not really a fan of the watch’s design either, but he believed the groundbreaking innovations needed a design that would demand attention. The Monaco did exactly that. The disruptive design was difficult to produce, and its popularity among watch aficionados and collectors was not immediate, but it remained in the collection. Hopefully!

Strong links to the world of motorsports

Jack Heuer was convinced that motor racing was the right way to promote watches, including the Monaco. He wanted the watches (and dashboard timers) his company produced to be linked to the names and places connected with major races. The Monaco got its name from the glamorous and well-known Monaco Formula 1 Grand Prix (it still exists today). TAG Heuer is the Official Watch of the Monaco Top Cars Collection museum and has close ties to the Automobile Club de Monaco.

“We wanted to create an outstanding and innovative product, something avant-garde”

From Le Mans racetrack with Steve McQueen to The Dark Lord 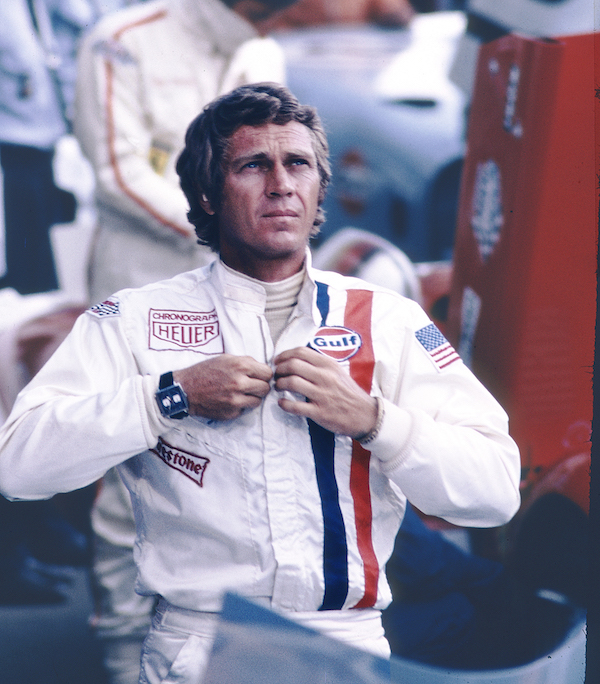 In 1971, the Monaco shared the cinematic limelight with Steve McQueen, we can almost say that it was he who gave his celebrity to the watch, in the movie Le Mans. In the mid-1970s, the Monaco received a makeover. At that time, black was becoming a fashionable colour, and so the Monaco was cloaked in a black anodised case. Known as The Dark Lord, this fragile and rare model was enticing and today it is coveted by collectors. The first chapter of the Monaco’s story ends in the late 1970s. 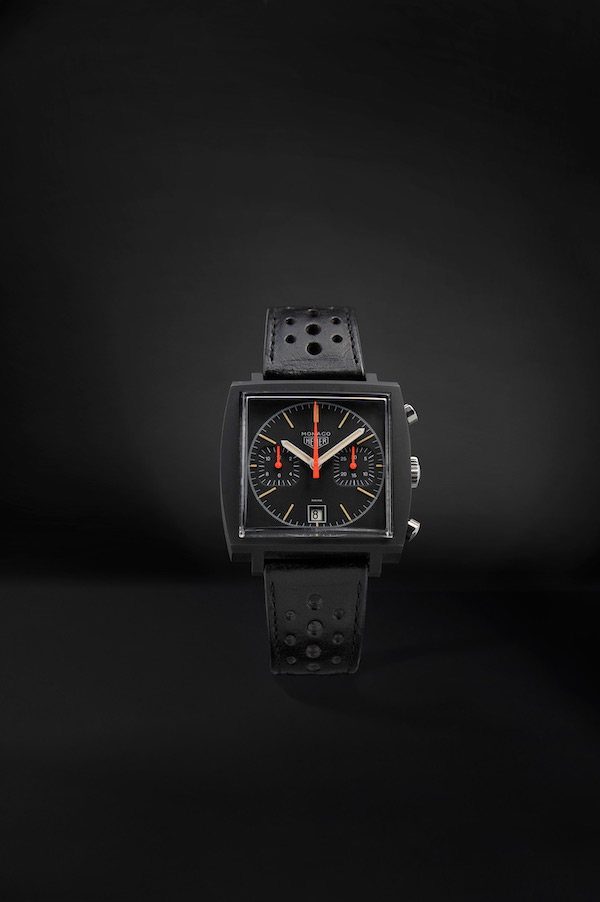 The evolution of the Calibre 11

Heuer became TAG Heuer in 1985, and, in 1998, the Monaco’s story continued with a relaunch model inspired by the original. This time, it was received with much more acclaim. Over the past two decades, the Monaco has been closely linked to haute horlogerie, with other versions that feature new complications, designs and materials. As it has evolved, the Monaco has kept the revolutionary spirit that made it both infamous and popular.

As Catherine Eberlé-Devaux, TAG Heuer Heritage Director, comments: “To me, the Monaco is a door to the TAG Heuer brand. It’s a piece that catches your eye and invites you in. Many collectors start with the Monaco and are then drawn into our world, eventually finding another collection to focus on, but always cherishing the piece that started it all.”

A impressive book about the TAG Heuer Monaco and its evolution 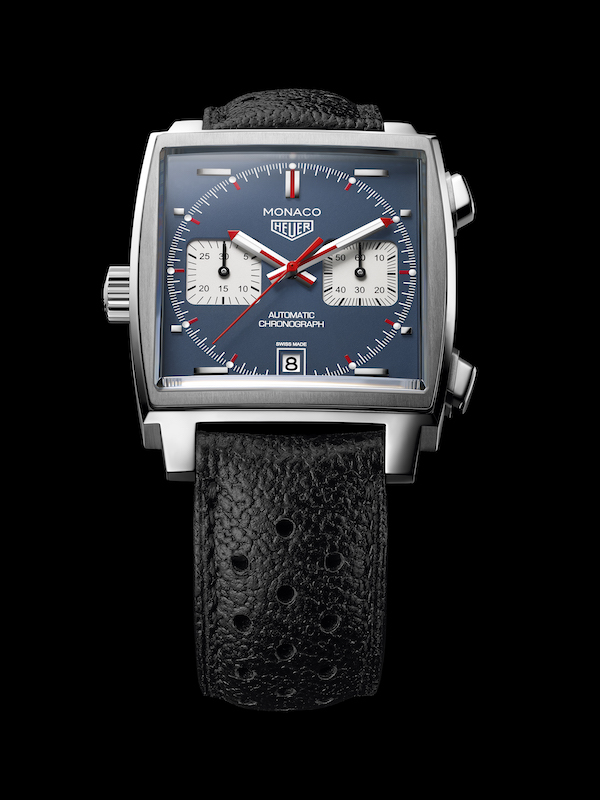 In honour of the 50th anniversary of the TAG Heuer Monaco, the watchmaker is releasing a book that captures the history and spirit of this unlikely icon. Paradoxical Superstar documents the lifetime of the Monaco with archive excerpts, never-before-seen pictures, and sketches of the designs and movements. Renowned British journalist Nicholas Foulkes wrote a chapter focusing on the Monaco’s history from 1969 to today. Writer and watch expert Gisbert Brunner authored a chapter about the technical innovation that has played an important role in the Monaco’s success. Famous American writer, editor and watch aficionado Michael Clerizo documents the Monaco’s relationship with Steve McQueen in the third chapter of the book. Underscoring the timepiece’s bond with its namesake city, H. S. H. Prince Albert II of Monaco wrote the book’s foreword. The book is coming in may 2019.

Hennessy Sound Box at W Montréal: Rhythms That Warm Up