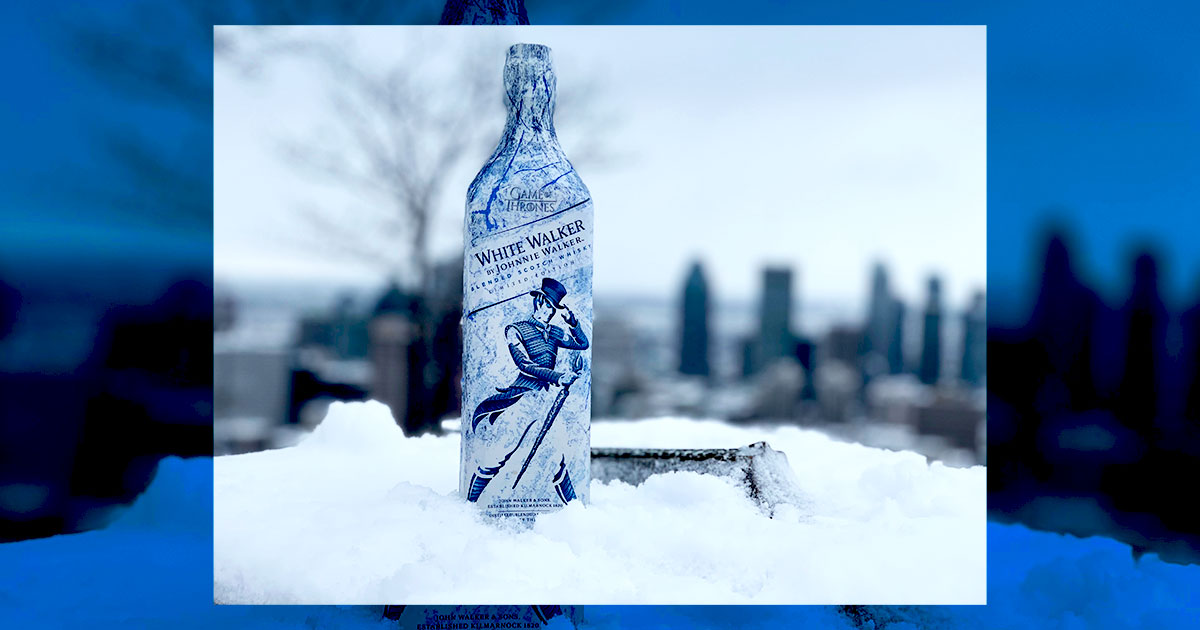 The Scotch officially entered the kingdom. In collaboration with HBO and Game of Thrones, the new White Walker by Johnnie Walker will be your new faithful companion to watch the series. Available now in SAQ and LCBO, this Limited Edition Scotch Whiskey is inspired by the most enigmatic and dreaded characters in the hit series – the White Walkers – and is here for the fans’ enjoyment as anticipation grows. prepares for the final season starting April 14, 2019. 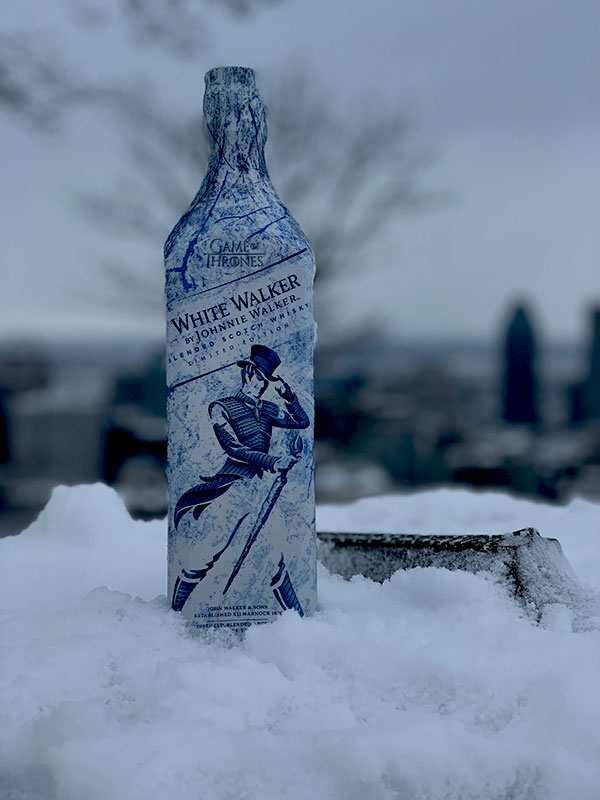 On the Mont Royal Belvedere
Photo: Normand Boulanger for RDPMAG

Known by their frozen blue eyes led by the Night King, White Walkers’ undead army has emerged from the frozen north, bringing with it the cold of winter and now a limited edition whiskey that evokes their frozen world. Created by whiskey specialist George Harper, alongside Johnnie Walker’s small team of experts, this innovative whiskey is, according to them, best served directly from the freezer, but we do not totally agree (see below), making thus echoing the frightening presence of the White Walkers 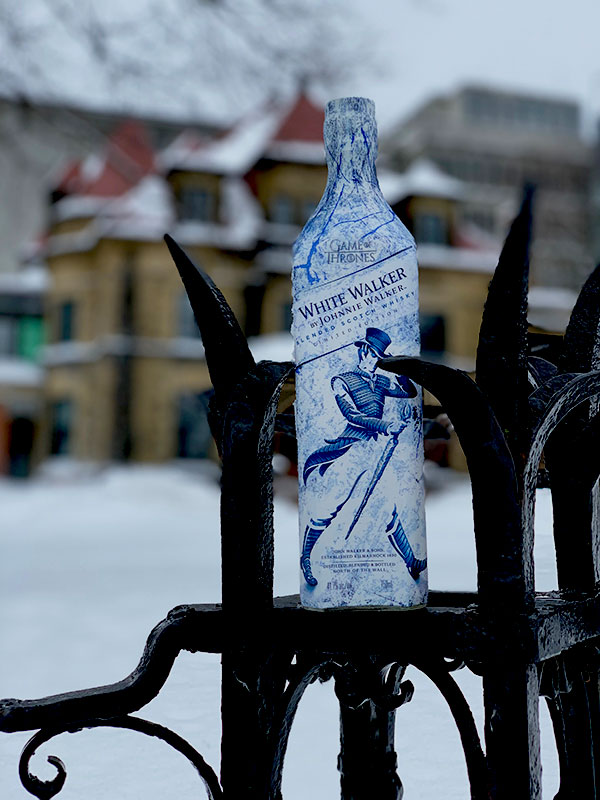 Bottling takes you to the frozen north with a glossy blue and white pattern, as well as the impressive Johnnie Walker Striding Man, now crafted in armor and standing in the ranks of the Night King’s forces. Using the heat-sensitive ink technology, fans will be reminded that “Winter is Here”, revealing an unexpected glossy graphic effect on the bottle when it’s frozen with “Winter is Here.” 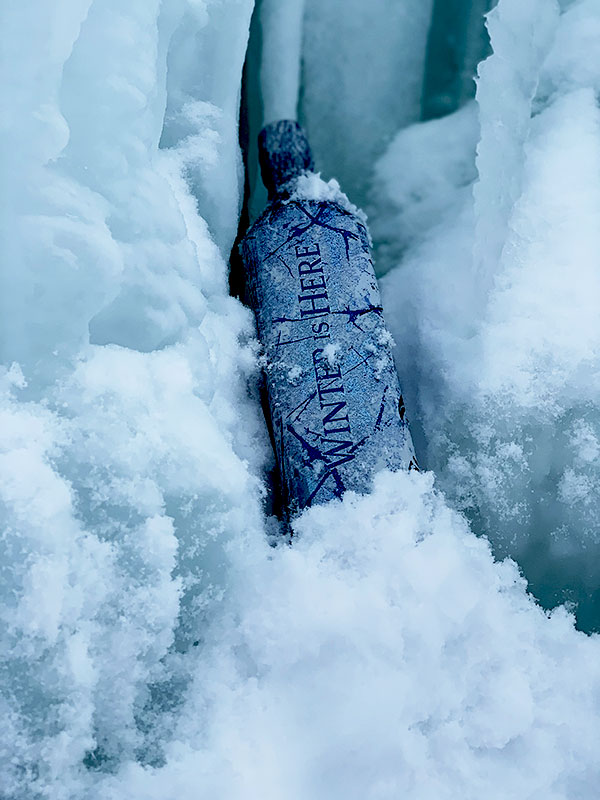 The inscription “Winter is Here” appear when the bottle is cold.
Photo: Normand Boulanger for RDPMAG

I tested the White Walker with Ambassador Whiskey Jérôme Laflamme, who offers workshops to discover the Johnnie Walker. Despite the fact that it is suggested to drink it cold, we tasted it at room temperature. Not really knowing what this edition is composed especially in number of years of aging, it was necessary to go a little blind.

Jérôme Laflamme: “It is still sweet and different from the other products in the range, there is no taste of smoke. There is at least 3 years of age because it is what it takes to be called Whiskey, otherwise it would be a Moonshine. I am curious to try it cold. We will put it in the snow to cool the product. Feels less vanilla and caramel. We lose the pleasant taste of whiskey.” 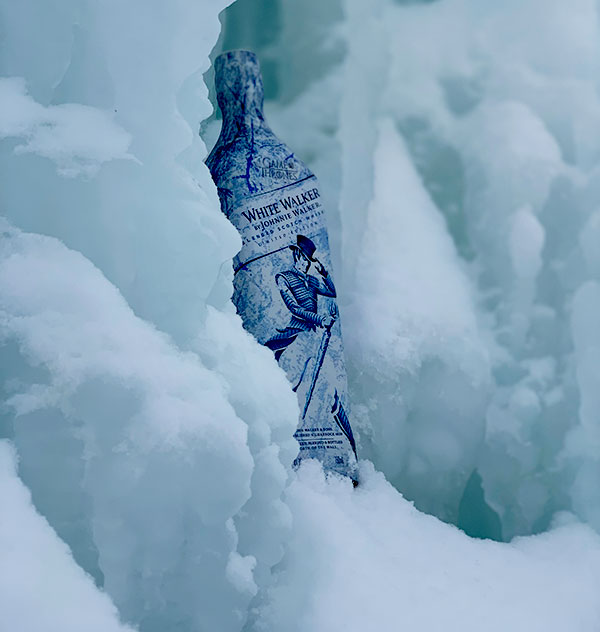 The latter is composed of single malts from Cardhu and Clynelish, the most northern distilleries in Scotland. Master distiller George Harper used Frozen North as the starting point for Johnnie Walker’s creation of White Walker. He said: “Clynelish whiskeys have had long Scottish winters, similar to those of Night Watch who have ventured north of the wall – so this is the perfect place to create this unique whiskey.” 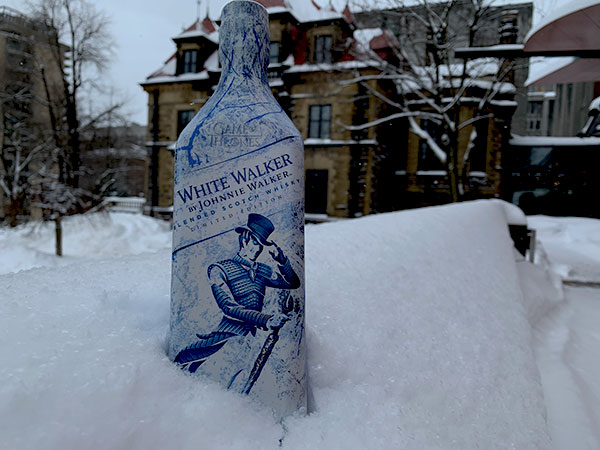 “Once Johnnie Walker had considered the possibility of working together on a Game of Thrones whiskey, we knew that the idea was perfect and that the time had come. From the beginning, they realized that we wanted to create something special and they did it with White Walker by Johnnie Walker. We are confident that fans will enjoy sipping this delicious whiskey pending Season 8 and beyond, “said Jeff Peters, Vice President, Licensing and Retail at HBO.

White Walker by Johnnie Walker is part of a broader partnership with HBO and Diageo (parent company of Johnnie Walker), which will also see the launch of the Game of Thrones single malt whiskey collection available from December, while supplies last The collection includes eight scotchs that are associated with one of the iconic Houses of Westeros and Night’s Watch authentic taste of the Seven Kingdoms and beyond. 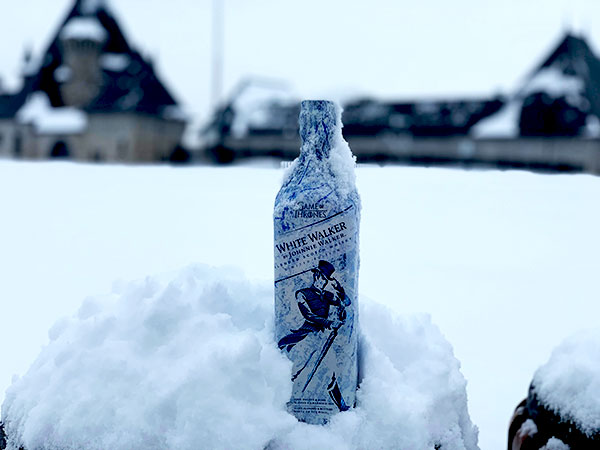 BOWMORE: The Dean of Islay