SUBSCRIBE
Home / Art of Living  / The Other Father’s Day

The Other Father’s Day 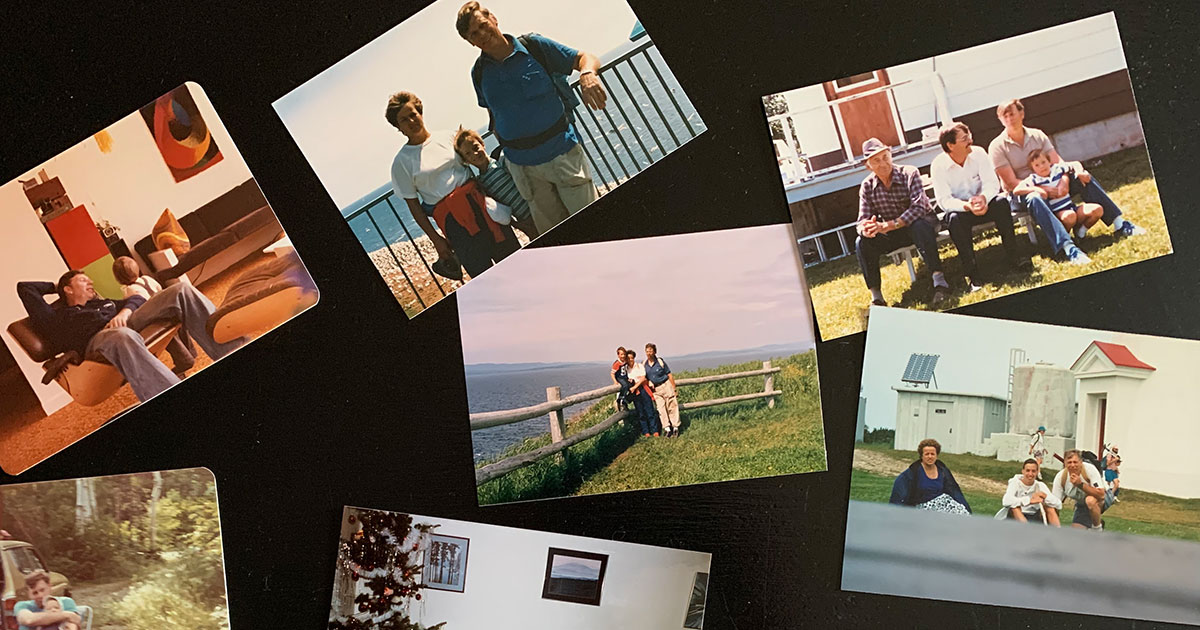 Having a site for a gentleman is of course talking about Father’s Day, it is a must. I must say, however, that my experience in this sense is probably different from that of many. And this article changed a little from what you will read on the site. Welcome to my The Other Father’s Day 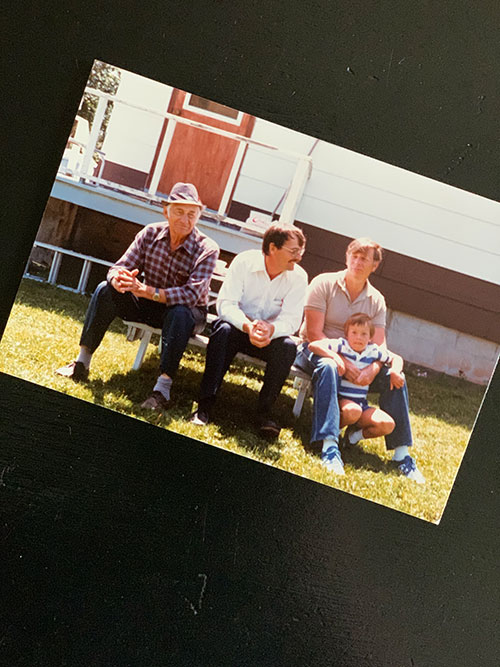 Having mourned the loss of my father a little over 20 years ago, this is a celebration that comes even more, at least for me, to recall the absence of mine. I really liked him, father, maybe not everyone. I have good and bad memories with him, probably like most of you. I will only relate the good ones.

The love of wine

My father is the one who introduced me to wine. At a young age, he gave me permission to put a finger of red wine in my water. It was a departure. I remember that very often on the occasion of this summer festival, we ate lobster with a glass of white wine. My tastes in terms of white have evolved since that time, and I would certainly look for an agreement with a Chablis, a Sancerre or a rosé that has body like the Miraval that I like. I would have loved to discover the wines with him, Osoyoos Larose, Bachelder wines, Clos Jordane.

He was also a great lover of port wines, the Cockburn’s, the Taylor Fladgate, I have seen bottles of it pass during the many stays at the farm of one of his best friends, Leonard the professor, not to name him.

These days, I don’t remember how long we stayed there, sometimes, it was weekends, sometimes a day, sometimes more, I remember these famous barbecue, Labor Day, that the ‘we were turning by hand. Ah the old days. These are past memories, but they are always present, I hope I will never forget them.

My father was an outdoor fan, I don’t remember how many mountains we climbed. How many nights did we spend in tents, in trailer tents exploring all of Quebec? But mostly Gaspésie, its region of origin. Whether it is Forillon, Anticosti Island, Lac-Saint-Jean, La Côte-Nord, Bonaventure, we have covered many kilometers of roads. Me, sitting in the back seat not always very comfortable, especially when I was growing up, of the various vehicles that we may have had. But being there, especially several years later, reminds me of how lucky I was to be able to make all these discoveries. Without forgetting his love for La Semaine Verte, which he watched religiously every Sunday at Radio-Canada. 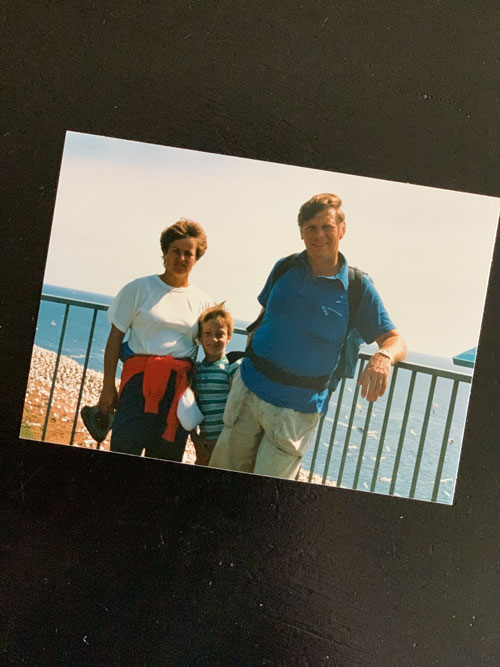 To say that my father was a traveler is an understatement. Being a professional soldier, it was mainly in Europe that he traveled, long before my arrival. Germany, Cyprus, Norway, Denmark and so on. Unfortunately, I have not had the chance to travel abroad with him, and that is also what I miss, this impression of not having experienced something, of having seen the world with him. You certainly understand what I mean.

Probably my father’s biggest disappointment, that I didn’t become a great athlete who went to the Olympics. He who excelled in skiing, cycling, walking, fishing, hunting. In short, he had talents, my father. And he loved sports. Not so much on TV, but in real life. I saw a few matches of the deceased Nordiques with him in the old Coliseum, quite an adventure. I remember going there for my birthday. 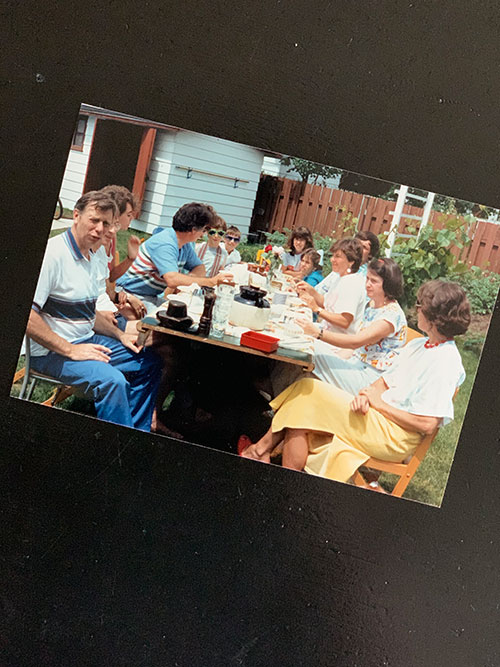 Cooking was a big deal for my mother, but my father had his specialties, the BBQ, everything that burned with alcohol, pepper steaks, my taste buds are drooling. I recently inherited the famous steak boards, a gift from my mother, marked by all the stabs that there have been on them over the years.

An engineer without a diploma 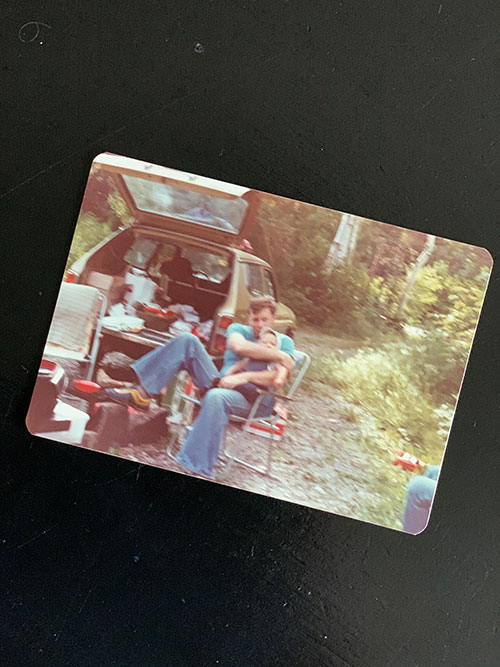 While the term geek was not yet popular, my father was certainly one. The number of gadgets he had, whether it was the key ring that emitted a sound when we whistled, to our first computer in the mid-80s (without internet of course), to the communication system between the basement and the first floor was ingenious. I said in the introduction an engineer without a diploma, but the term comes from his friend Leonardo, who spoke it when he praised his funeral. He made so many things with his hands, it’s pretty incredible. A broth stove, a trunk cover for his truck, my old bed, and so on. And things that have lasted over time. You have to believe that these skills acquired in the army will have served him all his life. 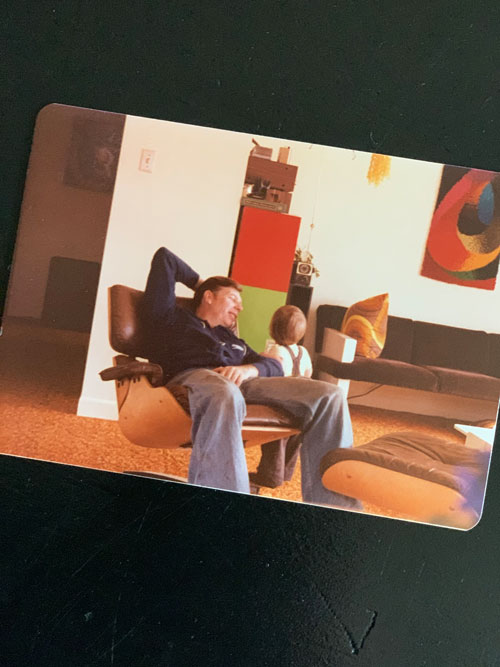 To see the collection of records and cassettes that he owned and that I now have in part (Charlebois, Vigneault, Les Cyniques, Brel, Bécaud, Brassens, etc.), it is certain that my father loved music. I remember the late Kenny Rogers playing profusely in his car. He also adored operas, probably due to his passage in Europe where it was more custom than here. In short, music always resonated with us.

Memories are often contained in moments, but when we forget, memory tends to do that sometimes, the photo is there to remind us of certain moments. Moments that we will have lived, or others that we will live by proxy through images. This point is interesting, especially from my father’s travels. While these took place at a time other than where I live, I learn to discover places, moments, roads, old cars, an old way of life, but people, especially people.

Do not (yet) be a father

Being single at 42 and childless, this holiday is even more special for me. I offer suggestions for gifts to give to fathers, but I still feel a little sad that I am not at this stage, either because I do not have a girlfriend and child or because I have lost my father.

Closing on a positive note

On this, happy Father’s Day to dads, step dads, new dads, those who will become, but also to dads who have unfortunately lost children.

Thank you, Dad, for being everything you were. I hope to be as good as you one day. So this is how I live The Other Father’s Day.

Apple is also paying homage to Dads with this new documentary which will be on Apple Tv starting June 19.

Besides, Dove Men+Care, the producer, who also presents the premiere of this documentary, in partnership with Dad Central, an organization that promotes involved fatherhood across Canada. The company has combined its network of researchers, communities and dads to create and share parenting resources to answer some of the most wanted parenting questions dads at home are asking.

Dove Men+Care will donate a percentage of the film’s profits to support parenthood involved across Canada.