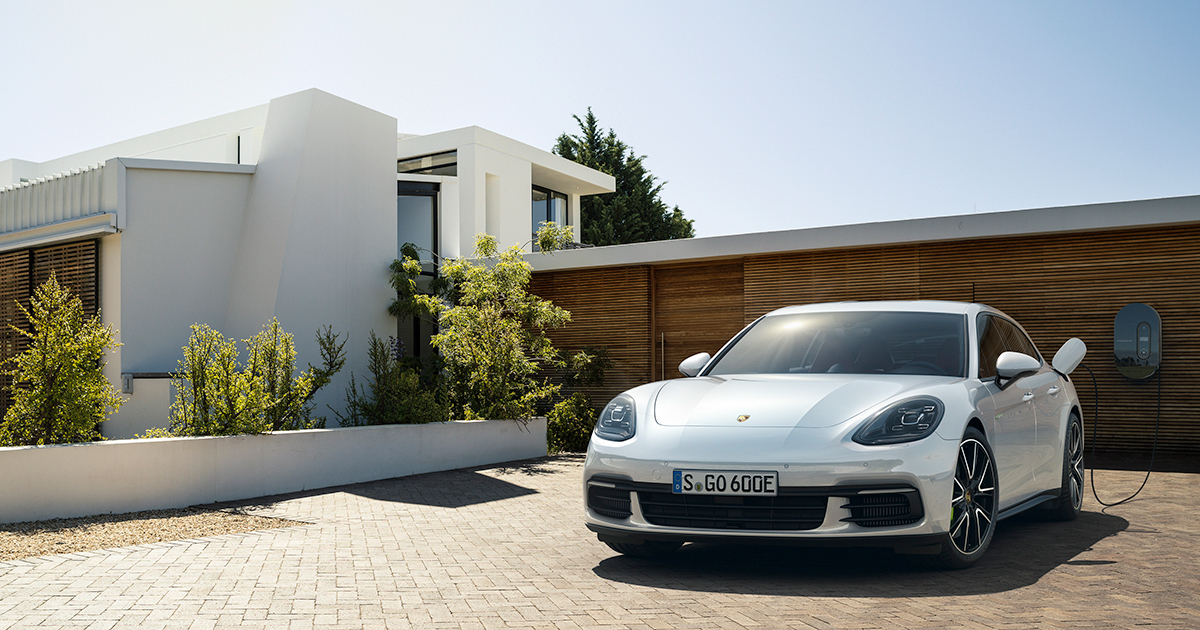 There is always something special about driving a Porsche, my first real experience was during the Ice Experience at Mécaglisse which I told you about in the Issue 3 of Gentologie. How happy I was to have the chance to test the Porsche Panamera 4 E-Hybrid Sport Turismo. Some might say that it doesn’t necessarily look like a Porsche 911, obviously, it’s very different. But on the performance side, it is blown away, the power is there! 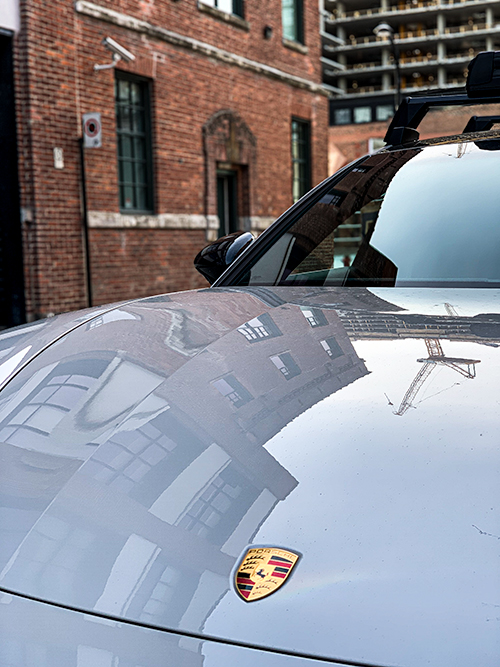 This car is simply beautiful. It’s really a Porsche. Fluid, athletic lines, its wheelbase is 3 cm longer compared to the previous model, on the other hand, the shorter overhang at the front and the longer at the rear give a really more dynamic appearance to the general line. The more pronounced sculpture on the sides reveals a typically Porsche size and lightness. 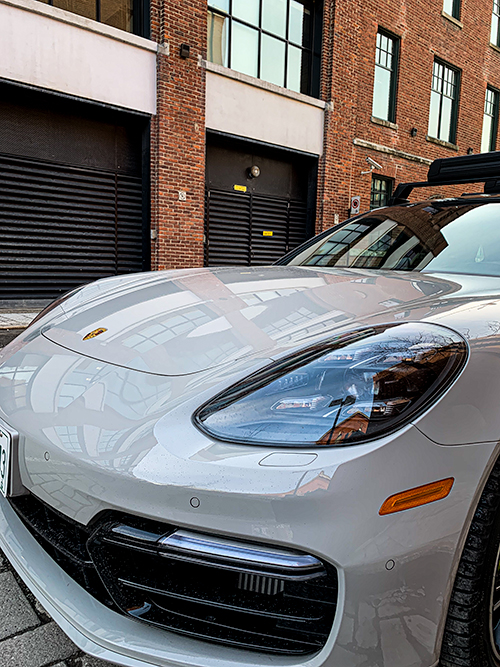 As I said earlier, there are the distinctive Porsche signs at the front: the LED headlights with 4-point daytime running lights. Differentiating characteristics in Green: brake calipers, instrument cluster hands, outline of the “e-hybrid” inscriptions on the front doors and the monogram of the rear hood model. We know immediately that it is a hybrid, no doubt. The light strip that adorns the rear and continues towards the narrow LED raised taillights with stop lights also in 4 points, like the front lights, are characteristics common to all Panamera models. The telescopic rear spoiler is integrated into the bodywork and reduces lift at the rear axle when riding at high speed. 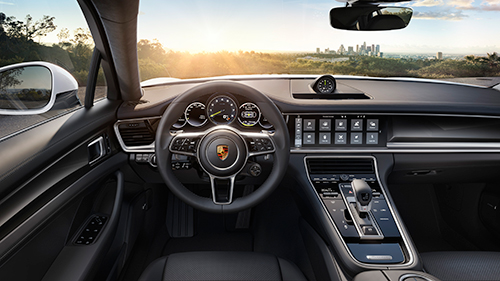 The interior of the Panamera 4 E-Hybrid
Photo: Porsche

As for the interior, it has been completely redesigned, but still remains typically Porsche, the resemblance to that of the 911 really shows a family resemblance; the center console is rising and continues to make an integrated assembly with the dashboard which is for its part flat in its width. The analog tachometer is located in the middle of the instrument cluster.

However, what marks most is space and comfort. Which is not really typical of a sports sedan. But which it is for the new Panamera.

The Porsche Advanced Cockpit control concept is new in the Panamera. The center console is equipped with Direct Touch Control and has a glass-like screen with touch-sensitive buttons for direct access to the main functions. The latter are really very easy to access, however, I did not have access to the various Porsche applications, but the Apple CarPlay integration is very well done, without forgetting the Bose sound system present in our vehicle.

In the middle is the compact gear lever, a bit confusing at first, since it is very different from the North American models, but after a few tries, you can easily find your way around. The dashboard has a built-in 12-inch high-resolution touch screen where the camera in 360 view is broadcast. In addition to the optional 4-zone automatic air conditioning, the passengers have an additional touch screen at the rear which I unfortunately did not have the opportunity to test, being the only passage on board. High-resolution displays to the right and left of the tachometer display virtual instruments, maps, and other information. As for the rear seats, there is room, whether for children or adults. And the trunk is huge with its 425 liters or 1,295 liters with the rear seats folded down.

The Driving of the Porsche Panamera 4 E-Hybrid 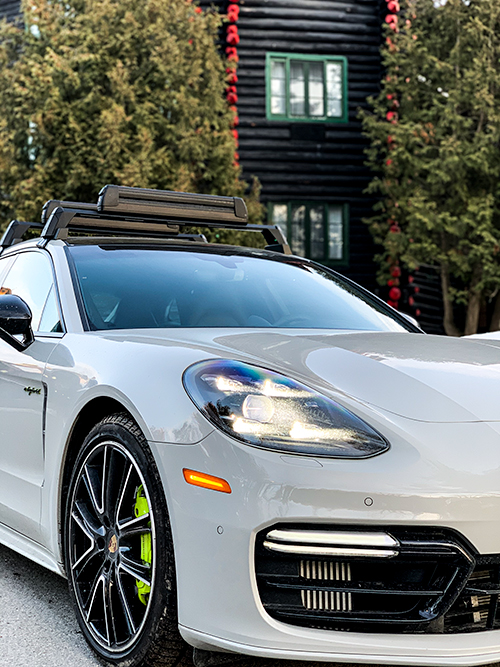 A Porsche will remain a Porsche with its 8-speed Porsche Doppelkupplung (PDK) transmission and its mixed V8 Bi-Turbo engine/electric motor for a displacement of 2.9 l for a combined power of 457 horsepower, giving a combined torque of 516 pounds—feet.

On the electric side, there is a 14 kWh lithium-ion battery with Porsche charging equipment. You can also recharge it on most public charges.

The maximum speed on the circuit, according to Porsche’s data, is 275 km/h and its acceleration from 0 to 100 km/h with the Sport Chrono package is 4.6 seconds. Obviously, I did not push the speed up to 275 km/h, but I must tell you that we do not feel the speed at all, the performance of the vehicle is so soft, we barely perceive the speed going to 130 km/h. I had to be careful, I thought I was closer to 110 than 130. 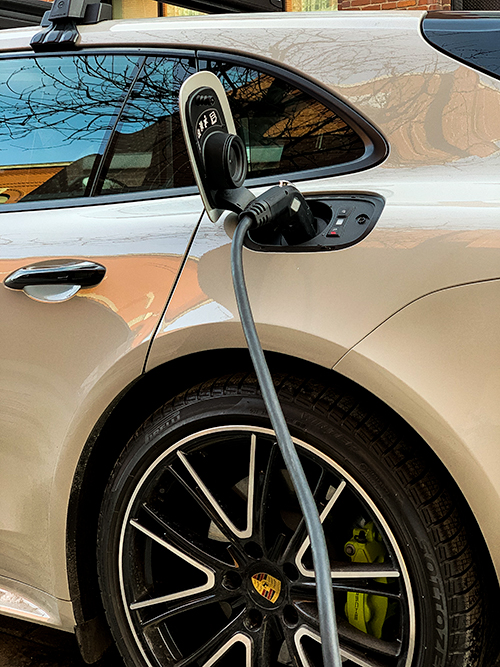 Consumption is still interesting in the Porsche Panamera 4 E-Hybrid electric mode, and charging is not that long, about 3 hours for a full charge, nothing scientific as data there. The combined consumption is 10.5 l/100 km, on the other hand, do not forget that the 80-liter tank will increase your expenses at the pump if you go long distance.

While this sedan is hybrid, just like the Cayenne that Marc Bouchard talks about in the pages of the Issue 4, it is important to remember that it is a good investment, since even if the price of the gas are still up.

At a retail price of $168,415 for our trial version, it is a family sports car that will give you all the sensations of a real Porsche and will really make you feel like in a sports car, with everything that comes with it.