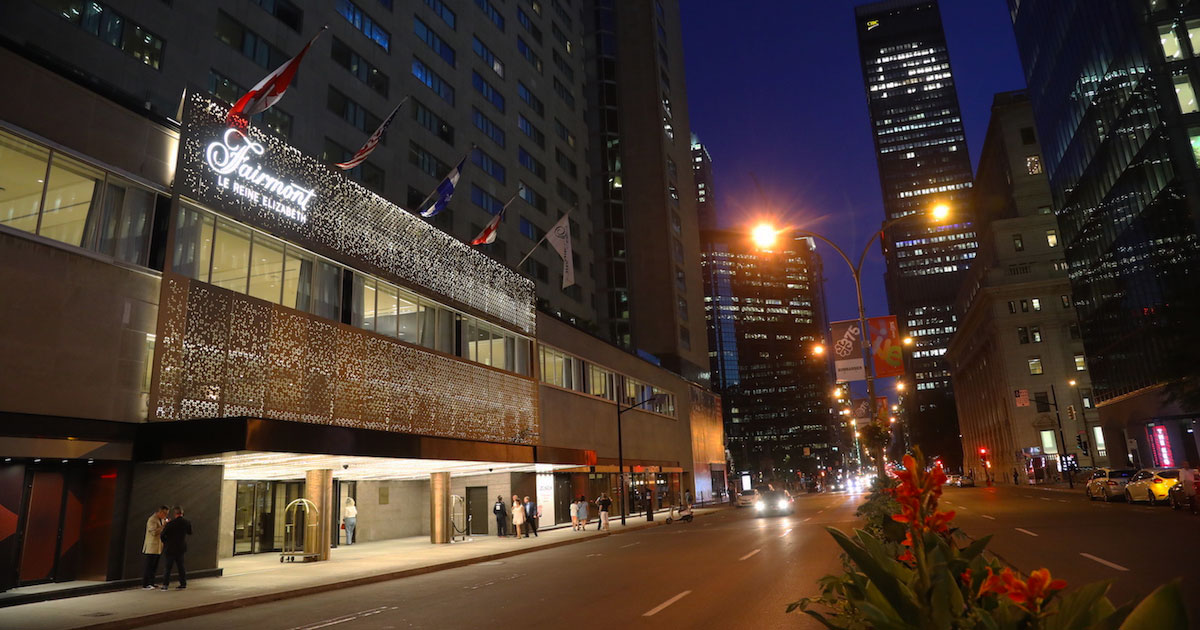 Fairmont The Queen Elizabeth: From past to present 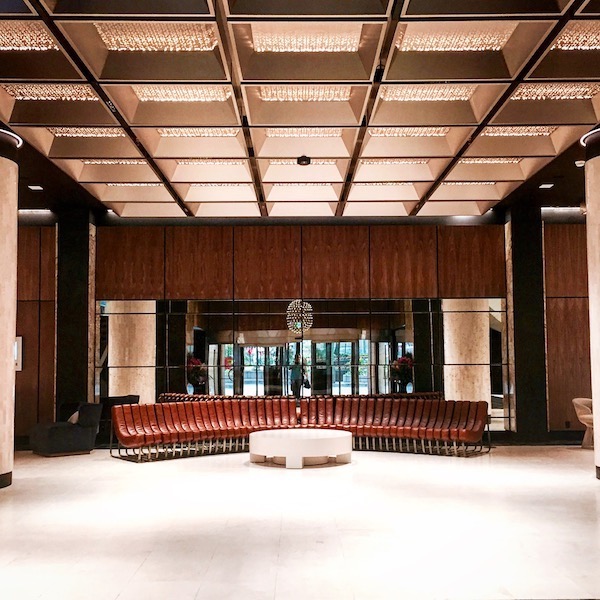 It’s all a broom shot that was given by the architects in order to dust off this great Canadian hotel, the largest east of Toronto actually. Its construction in 1958 made of Queen Elizabeth made it at the time, perfection in the hotel business. Everyone remembers the Beaver Club, which in the 60s brought together international politicians and business people. Even great musicians such as Oscar Peterson have performed there and the list of celebrations, dances and prestigious events, attended by heads of state, crowned heads and businessmen, is impressive. But the hotel had somewhat lost its luster in recent years. He was no longer the lady of Montreal. It must be said that the world of the hotel industry was energized with the arrival of new technologies, in short, a great work had to be done in order to bring the hotel to another level.

In order to understand where the Sid Lee architecture team wanted to bring the hotel to the initial vision of the project according to – Jean Pelland, architect, senior partner of Sid Lee Architecture: «We designed the new hotel experience with a very holistic vision . The establishment literally opens onto the city to welcome the neighboring populations. It reaffirms itself more widely as urban equipment, serving local and international clients. It is a third-party place in which people can go every day, both for conducting business, participating in events, or entertaining. «This opening to the city can be seen from the outside with the bar Nacarat, the Kréma Café and the Rosélys which have a whole door, a beautifully glazed wall rather, on the street. This openness let the natural light into the hotel, an advantage that few hotels have in their ground floor, these often being partitioned into dark interiors. 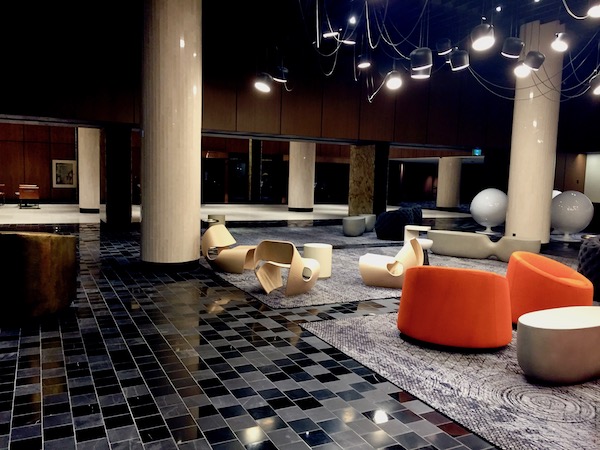 Two other public areas are also present in the hotel, the Agora and the Marché Artisans. The Agora is a new type of programming for the hotel. This prototype space is an indoor public square, it feels like an atmosphere at the C2 Montreal when you enter the place. The primary vocation of the Agora is to host festive events with great deployment, which define and radiate the city on an international scale, besides a concert of Charlotte Cardin was presented recently. Its layout is a vision of the future, which pays tribute to the futurism of the time. The space offers audacious and heterogeneous juxtapositions of small convivial salons, easily transformable. We are really destabilized when we enter this space, It does not resemble what one finds in the Montreal hotels, even the most recent ones.

The Marché Artisans: The downtown grocery you were looking for

The Artisans Market, which is scheduled to open somewhere this fall, was developed with the collaboration of Peter Chase (BPC New York). The program of the market aims to open the doors of the hotel’s great cuisine, led by Executive Chef Baptiste Peupion and Market Leader Jean-Philippe Desjardins, we met him last year at YUL EAT, elsewhere. It will allow the public to stroll through the production space of the kitchen and see its craftsmen at work in their daily activities. The design is inspired by the allegories depicted on the original stained glass window of the Beaver Club, created by Marius Plamondon, to reinterpret the traditional North American summer cuisines. For now, a wall separates the Market and the Rosélys, but in a few weeks the two will be reunited forever. 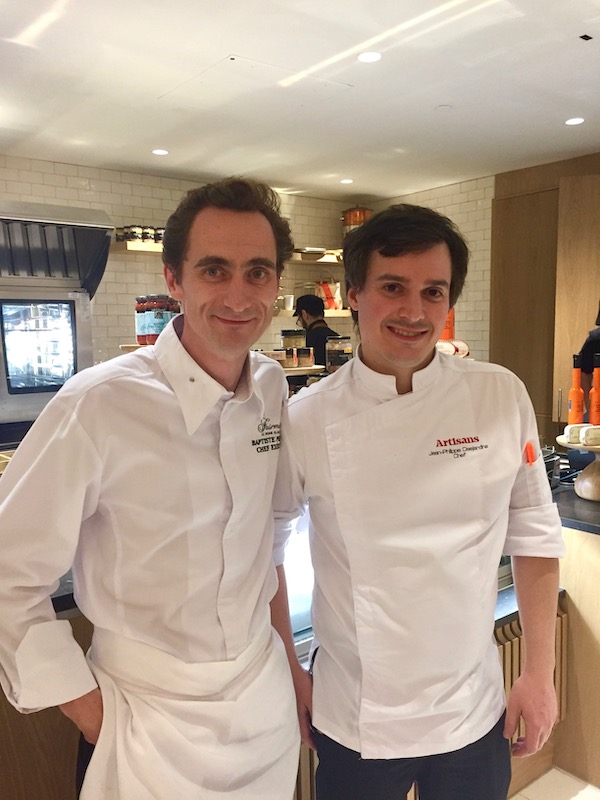 Speaking of the Rosélys, which I still have not tried the magnificent restaurant. The latter is a chic and accessible modern bistro. Combining a mix of Montreal with its Parisian elegance and English style, the restaurant is a sophisticated pragmatic. Being very different from its ancestor the Montrealer, the Rosélys offers a balance between masculine and feminine features in design. The original façade and ceilings were blown up to provide a superb view of the Marie Reine du Monde Cathedral Basilica and to give the chest and presence to the large central counter, overlooked by glass wires. Also as you can see in the photo, the huge glass wall is ubiquitous. And opens the restaurant on the town. It makes us want to go through the door immediately and get in. 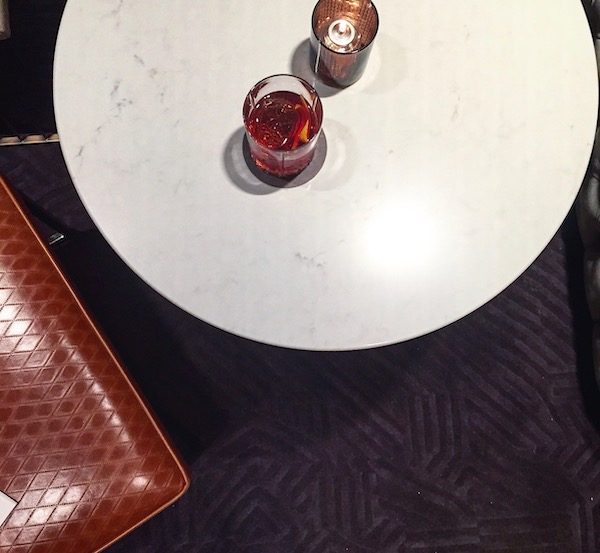 One of the tables at the Nacarat Bar
Photographs: Normand Boulanger | Gentologie

As for the Nacarat bar, directed by Nader Chabane, they have done it all. They went to look for masters of Montreal mixology such as Valérie Chagnon, Émilie Loiselle (she was in our winter magazine) and Kevin Rigolette to name just a few. The first thing you notice when entering the bar is the almost infinite effect of the latter with the huge bay windows that look out on René-Lévesque Boulevard and those on the south side, hotel. Even if the ceiling is low, one does not feel at all crushed in this felted space. While several bars boast of their «backbar» in Nacarat, it is rather in the center that one finds a huge bar constantly animated by the activity in this one. The identity developed is unique, it is always inspired by the language of the time, in addition to proposing a marriage of styles between glam-rock, pop and the culture of British pubs. 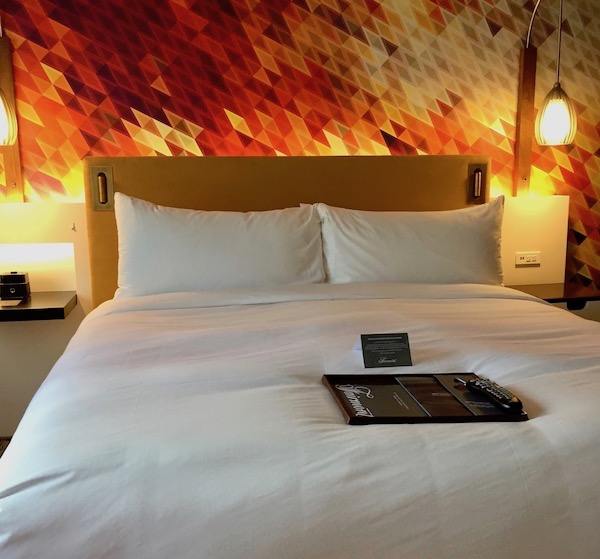 But back to basics. The rooms, as a hotel without rooms, well this is not a hotel. I was lucky enough to visit the Ville-Marie Royal suite at the Fairmont Le Queen Elizabeth (you will notice the name in French on the hotel for that matter). 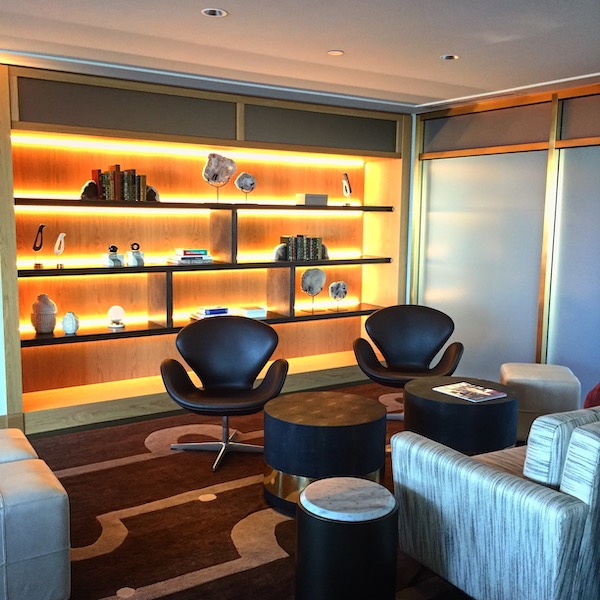 You can arrive in this suite in two ways. Either by the Fairmont Gold level, the experience for the most demanding customers, which is also, has been enhanced. From now on you can enjoy exclusive spaces on the 21st floor, formerly the renowned Panorama cocktail lounge, offering unique views of the city. In order to offer a tick more to all guests the space is designed as a succession of lounges, each having a clean ambience. We notice the clarity in these lounges, the lighting effect has really been put forward on this floor, it is incredibly beautiful and soothing. Anything a traveler wants. It feels like a little in the City of the Clouds in The War of the Stars so it is majestic. 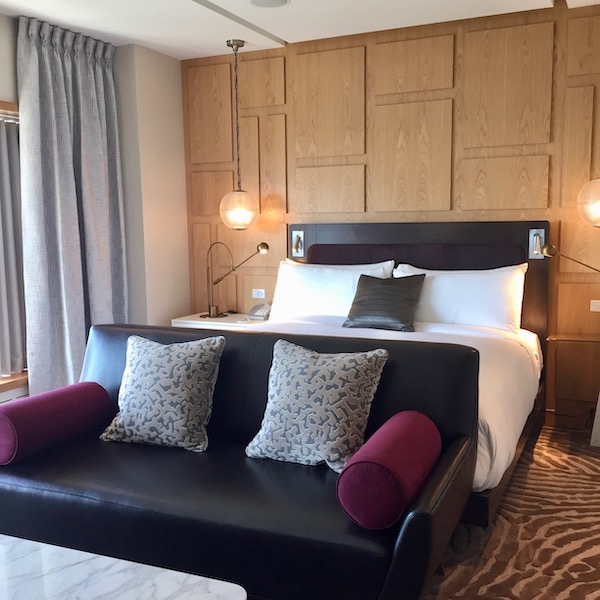 In short, after climbing the elevator, you arrive in a magnificent suite on one floor, must be specified. The dining room is huge and the mirror magically transforms into a TV set. The kitchen, which I unfortunately did not see, is camouflaged behind the cupboards. Then, it is direction the living room passing in front of the magnificent bar where we also find a huge TV. Then we go to the living room by climbing a few steps. The living room has a magnificent view of the René-Lévesque boulevard towards the west. You can choose to head to the bathroom, taking a large corridor, which includes a shower and a bath. There is a first bedroom, very large and very light with even a couch. A second bedroom with its own entrance makes up the suite. It can also be separated. 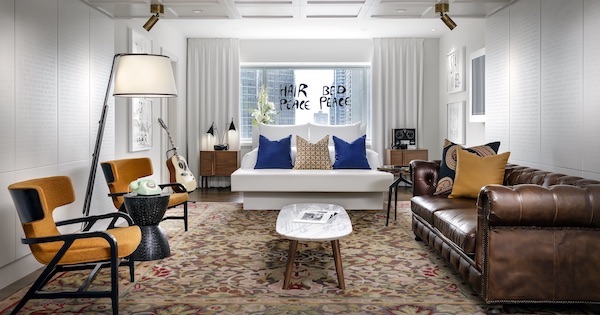 The Ville-Marie Royal Suite, the John Lennon Suite & Yoko Ono, the Peace Bed-in (to discover here) suite and the Fairmont Gold Fair were designed by Sid Lee Architecture. In order to underline the hotel’s modernist heritage, design draws its references in the richness of the styles and motifs propelled by the fashion of the 60’s. The Fairmont rooms and the Fairmont Gold rooms were designed by the Los Angeles Design360 Group in collaboration with Fairmont Hotels and Sid Lee Architecture.

The business experience is also completely changed. At the second level, the congress floor, the piercing of the façades and the decompartmentalization of the work spaces put into view the views of Mount Royal, the great goal of the renovation of the building, and flood the places with natural light. The third floor offers an ultra-modern business campus with a multitude of themed meeting rooms. It also takes advantage of the existing volumetry to create an outside balcony, overlooking the Esplanade of Place Ville Marie.

The C2 Space: At the top of Fairmont The Queen Elizabeth 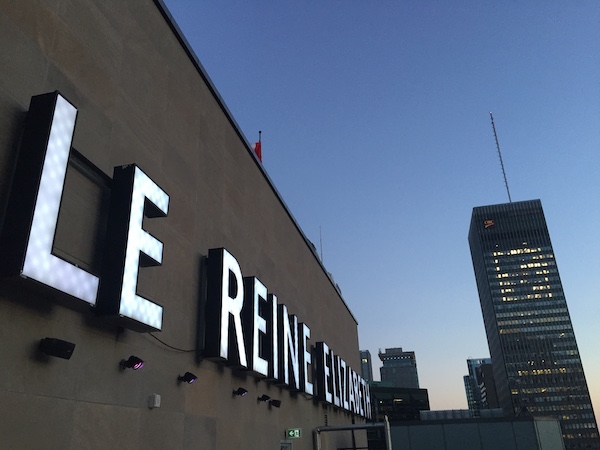 We were talking about the influence of C2 Montreal earlier. Well, in November, the Fairmont Queen Elizabeth Hotel will be officially crowned with Espace C2. The addition of the volume of glass to the 21st floor of the building is a reflection of Fairmont’s commitment to position itself as an avant-garde institution in the world of conference centers. The venue will accommodate up to 220 guests in a variety of configurations. Fairmont Queen Elizabeth and C2 jointly announced the development and creation of Espace C2 at the C2 Montréal 2017 event in May. I would have loved to see a beautiful terrace open to the public on this floor, but hey, we hope to have the chance to be welcomed to an event taking place in this space. 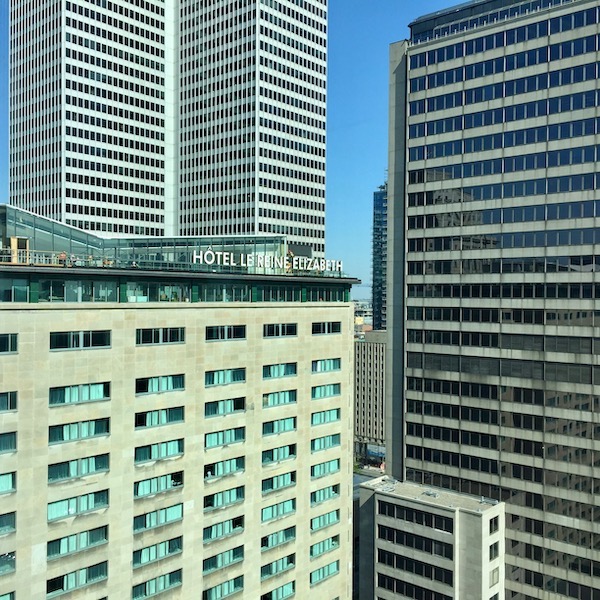 Make your reservation for a trip to Montreal now