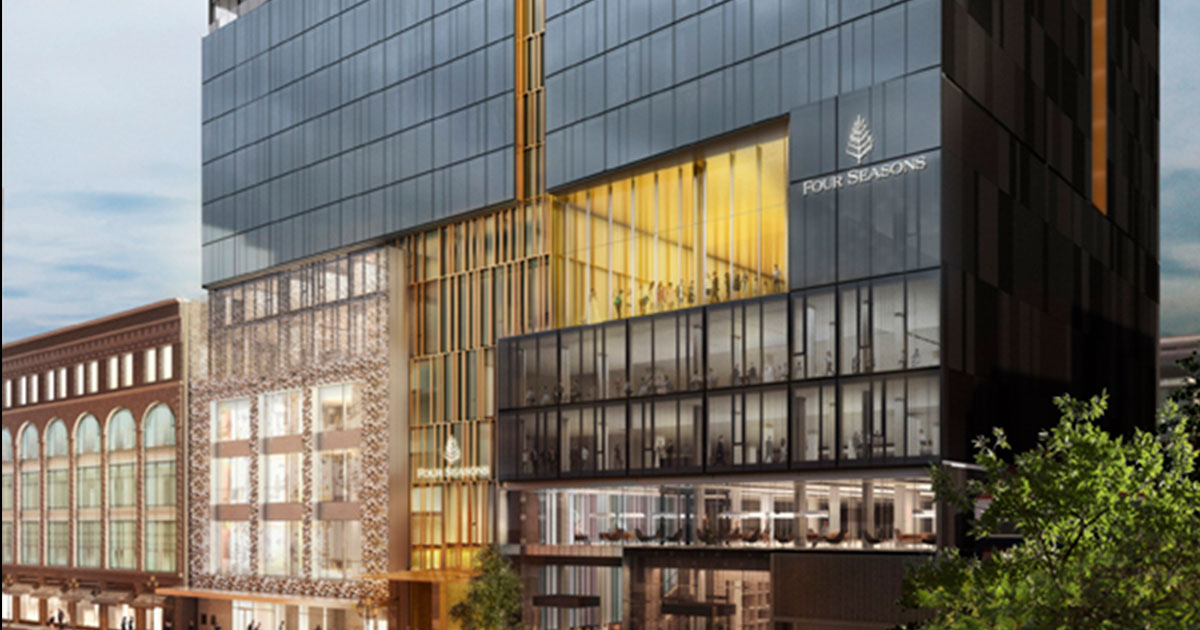 The Four Seasons Hotels and Resorts group, world leader in the luxury hotel and the Carbonleo group, a major Quebec society development and property management, announced earlier this week a incredible construction project (already in progress) of a hotel and branded private residences, the Four Seasons Hotel Montreal, on the site where the Hotel de la Montagne used to be in downtown Montreal on De la Montagne Street between Ste-Catherine Street and de Maisonneuve boulevard just off La Maison Ogilvy, who will also announce a major renovation project to become Ogilvy, a member of Holt Renfrew & Co Collection, while the Holt Renfrew on Sherbrooke will close. 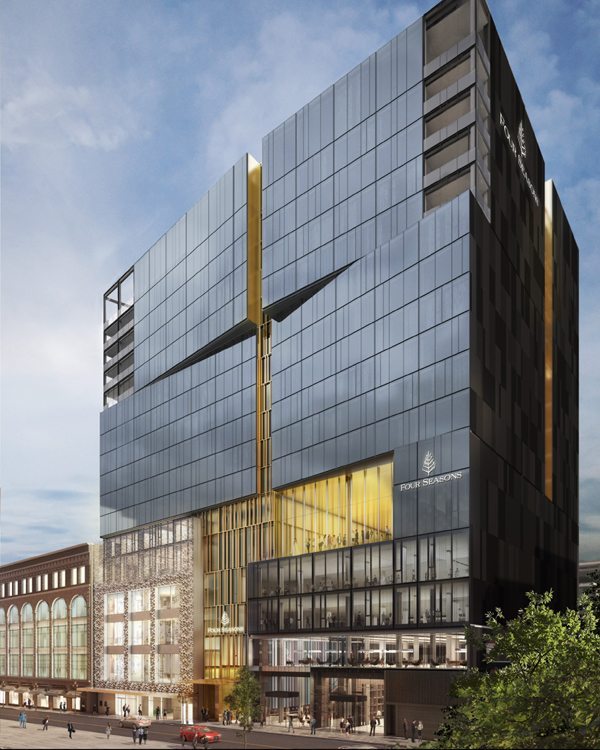 Four Seasons Hotel Montreal (I still remember the time he occupied the space of Omni and that the hotel was called the Quatre Saisons) will be part of a luxurious mixed-use complex located in the emblematic district of the Golden Square Mile and a stone’s throw from The Galleries District. Nestled on De la Montagne  Street, it will be perfect for travelers because it is 20 minutes by car or Téo taxi (it’s so much nicer) from the Pierre Elliott Trudeau international airport .

« Montrealers have been awaiting to see how de la Montagne Street would evolve, and we’re very proud to be part of this unique project while contributing to the revitalisation of this downtown area. Our vision is to create an architectural ode to extraordinary urban living that will help redefine Montreal’s famous Golden Square Mile,” said Andrew Lutfy, chair of the board, Carbonleo. “This will become an exciting lifestyle and dining epicentre for both Montrealers and visitors, linking the Bell Centre to the museum district in the heart of the action. We’re thrilled to be partnering with Four Seasons, who share our desire to bring an unparalleled experience to this renowned destination, all with a unique Montreal flavour. »

“Montreal is one of North America’s great cities – a vibrant urban destination that has long appealed to luxury travellers drawn to its European flair and cultural sophistication,” said J. Allen Smith, President and CEO, Four Seasons Hotels and Resorts. “In partnership with Carbonleo, we are bringing Montreal a landmark luxury hotel and private residences that will soon be the city’s address of choice,” continued Smith. “We look forward to introducing visitors and locals alike to the highest standards of quality and the most genuine and personal service – the markers of a Four Seasons experience the world over.”

Artsy, sustainable and innovative are the adjectives that can give this 163 rooms hotel offer a spa on the cutting edge of technology, indoor pool (hopefully an outdoor pool on the terrace / roof to resume experience the last Hôtel de la Montagne), a fitness center and ample spaces to accommodate larger-scale events in the metropolis. The resort will offer three restaurants of international standing, including one on a beautiful terrace where it will certainly good to be back in sunny weather, which will no doubt a perfect complement to the famous Montreal cuisine, an attraction which speak the city across the globe.

The Four Seasons Hotel Montreal will be glued on the big Ogilvy, the destination of choice in terms of luxury in Montreal to create a perfect environment in symbiosis. It is hoped that both will be connected to offer us a new and impressive experience.