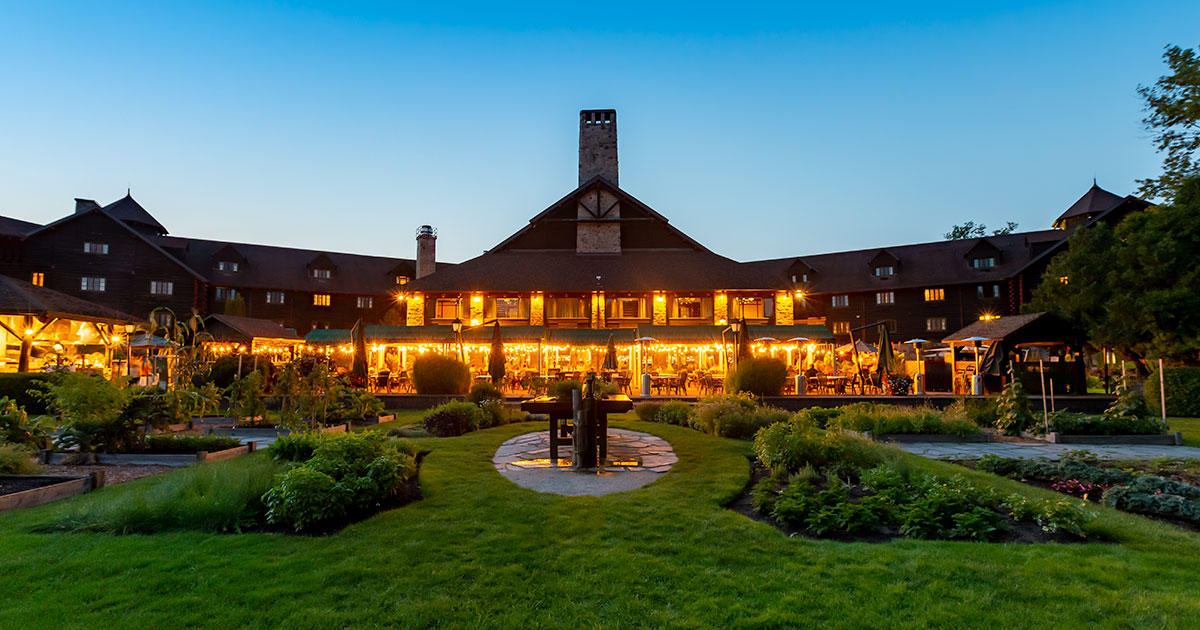 Welcome to the oldest log cabin in North America. While in February 1930, the place where The Fairmont Le Chateau Montebello now stands, was only a clearing in the forest, this magnificent hotel with rustic charm stands there with panache. It was barely four months later, in the summer of 1930, that the monumental red cedar pavilion that you can admire today was finished, and it is still the same one that is in place today: a feat that had not failed to catch the popular imagination and spark countless editorials in all North American newspapers at the time. It’s with the Porsche Panamera 4 E-Hybrid that I took the road to Montebello.

The Story of The Fairmont Le Château Montebello 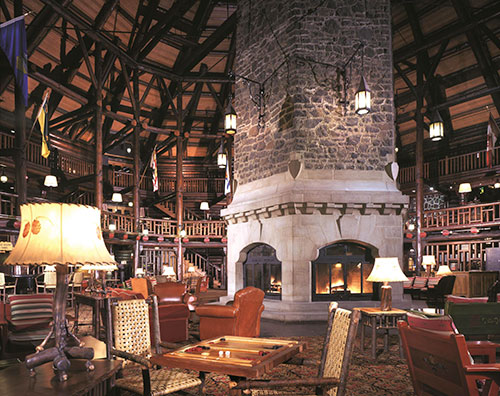 The majestic lobby and its 6-sided fireplace
Credit: Fairmont

This project is the work of an American of Swiss origin, Harold Saddlemire. The latter, inspired by the great hotels of the Swiss Alps, baptized the project “Lucerne in Quebec.” Like any large hotel, Le Château Montebello has a fascinating history. The latter is built on the lands of an ancient seigniory. The latter, bought in 1674 from the West India Company by Bishop Laval, the first prelate of Quebec, and acquired in 1801 by the famous Papineau family, that of the former prime minister, Louis-Joseph by his first name. There she built the Grand Manoir which still stands on the property. The Manoir houses a museum, usually open to the everyone in summer, but the latter is being renovated and will reopen in 2021. 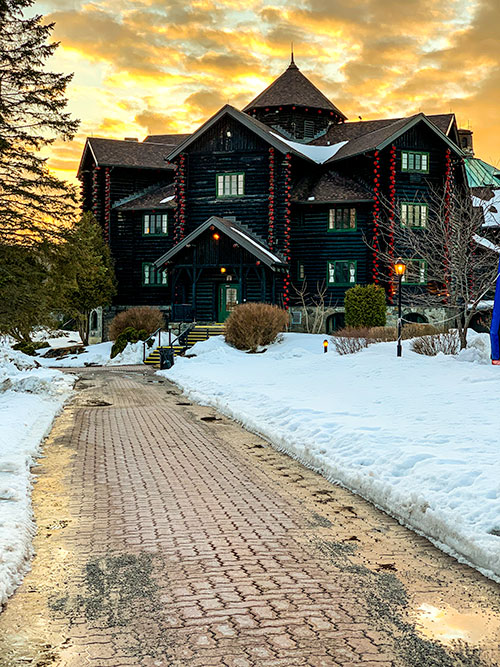 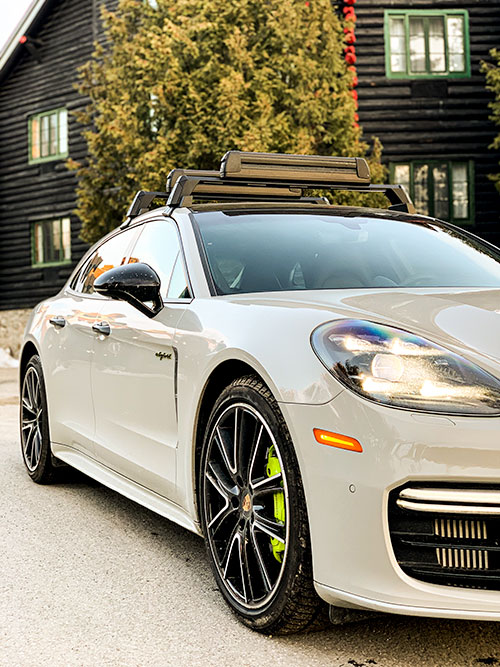 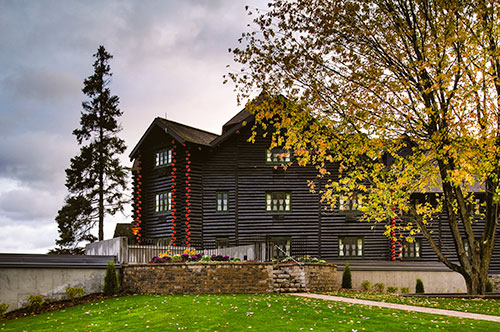 Until 1970, the Château served as a retreat for the Seigniory Club, whose members were mainly from Canadian business and political circles, such as former Prime Minister of Canada Lester B. Pearson or personalities, such as the Prince Rainier and Princess Grace of Monaco. In 1970, the Seigniory Club was taken over by the hotel company Canadian Pacific Hotels which named it Le Château Montebello and opened its doors to the public for the first time. Since then, Canadian Pacific Hotels have been transferred to the Fairmont chain and more recently, acquired by the Accor group. Le Château Montebello soon established itself as one of the most notorious resorts in eastern Canada. 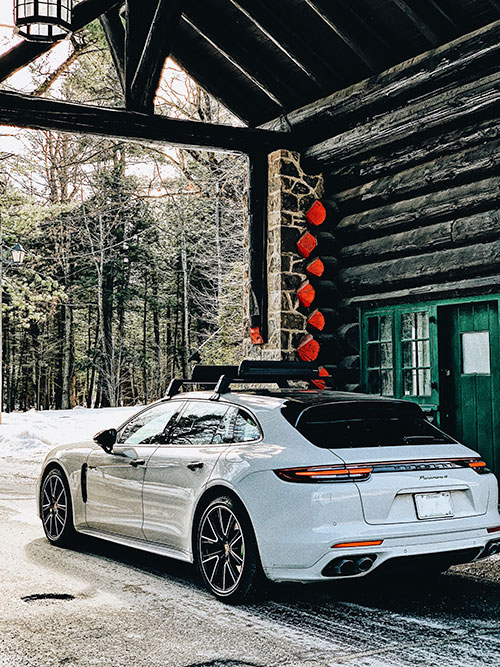 As you enter the property, passing under the wooden arch, it is immense, the ground is so vast. At the peak of winter and summer, the whole must be magnificent. For my part, I was there at the end of winter, when the rain had already started, it was still superb, although a little icy. This resort is what you would expect, a bit more remote from the world, and it’s perfect for disconnecting and resting. And a huge network of tunnels allows you to get to, without leaving, the various facilities, including the majestic and magnificent swimming pool as well as the health center, without forgetting the arcades, which will appeal to nostalgic or the little ones. 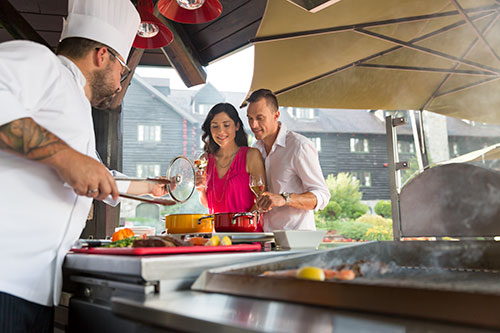 The outside BBQ
Photo: Fairmont

For the gastronomic side, there is excellent service and fine cuisine with the restaurant Aux Chantignoles, where we eat like kings seasonal specialties of the region. The service is also impeccable. Sunday brunch is a tradition at the Fairmont Le Château Montebello, regional specialties, refined cuisine and delicacies are in the spotlight You will also find the La Seigneurie bistro, with a more friendly atmosphere, opened a little later and more festive. Bar Le Foyer, located in the entrance hall, is one of a kind! It is located right next to our hexagonal fireplace, under a wooden beam ceiling, straight out of an architect’s dream. 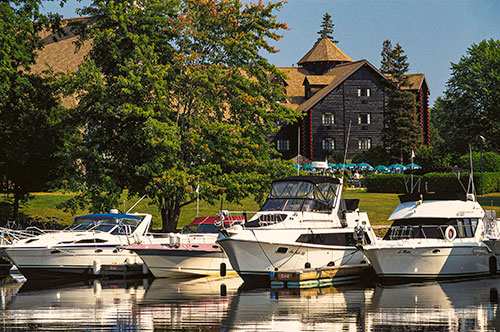 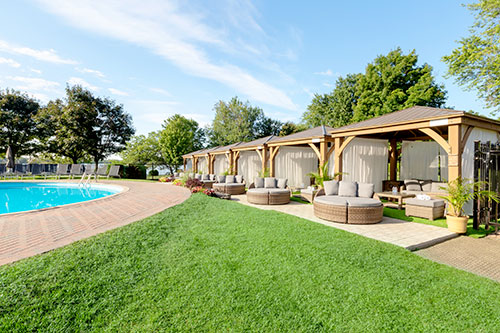 If we come back to other activities, athletes will be able to take advantage of a whole range of indoor and outdoor activities, from horse riding to golf, including tennis and swimming in summer (or in the 4-season pool) or, in winter, cross-country skiing, ice fishing, snowmobiling and curling. We could not forget the Land Rover Experience, which we will talk more in the Autumn magazine. In short, there is everything to not get bored. It’s hard to forget the majestic 6-sided foyer that warms the place and is the center of attraction in the hotel lobby. You will also find a bar service there, perfect for your evenings. 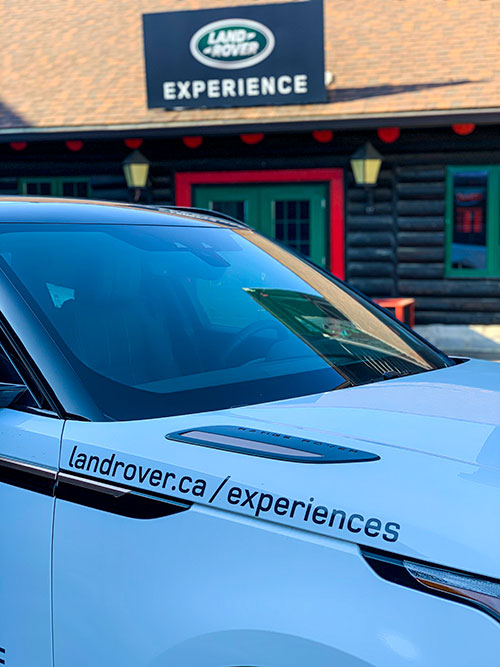 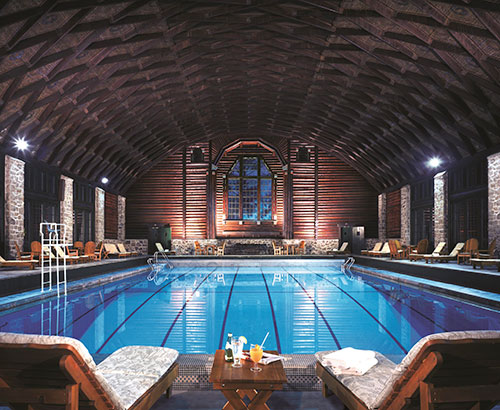 The inside pool
Credit: Fairmont 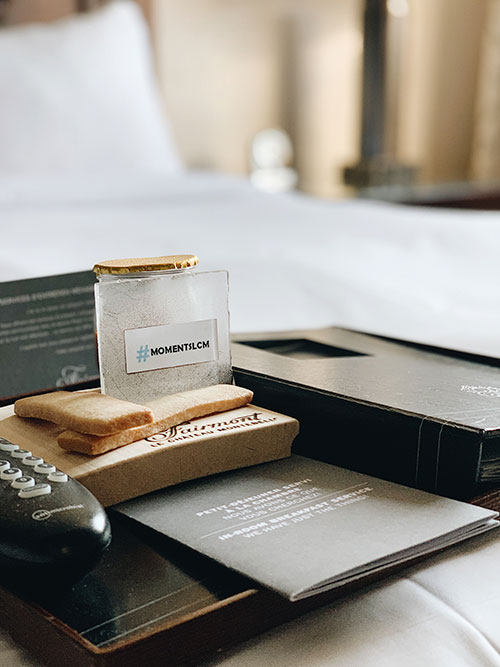 The bed and some delicious sweets
Credit: Normand Boulanger | Gentologie

As for the rooms, there are 210 of them, quite small when compared to the Manoir Richelieu, which has nearly double that. These have been renovated for the 90th anniversary of the hotel which takes place in this year 2020. The rooms are rustic inspired, do not expect modern rooms, this is not the case, there only the bathrooms that have been updated, and that’s perfect that way. We must not forget that we are in a chalet and the decoration is entirely in keeping with the theme of the place. Several original pieces of furniture have been brought up to date, and it’s perfect that way. Different, but this change does so much good and is a must to relax 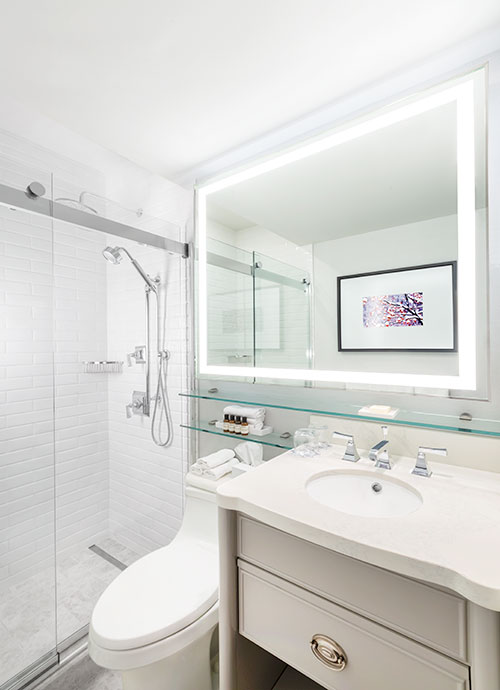 One of the renovated bathrooms
Credit: Fairmont 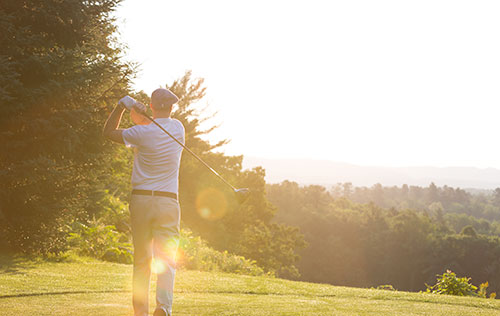 Designed by Stanley Thompson in 1929, the fairways of this magnificent course wind through attractive forests and its spectacular elevations enchant golfers around the world. Several high starts offer a superb view of the hilly regions of the Laurentians. Unlike most of today’s courses, each of the aisles on the course seems isolated, helping to create this atmosphere of intimacy that gives the impression of being alone. learn more about the Golf Club here. 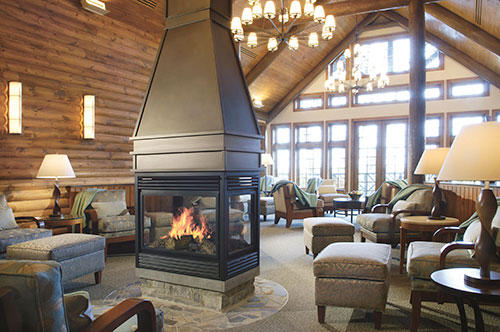 The Spa and its fireplace
Credit: Fairmont

Nestled on the hillside, in a wing facing the main pavilion, and overlooking the marina, the river and the surrounding forest, the spa combines modernism and tradition, and incorporates the natural beauty of Montebello with the wood still present, but with modern architectural elements such as beautiful light fixtures will bring you to relaxation. As in a traditional Quebec house, the foyer of Salon La Clairière forms the heart of the spa—the place where you can gather to relax and admire nature through the panoramic windows or from the veranda. Everything must be exceptionally charming when the temperature is at its best. 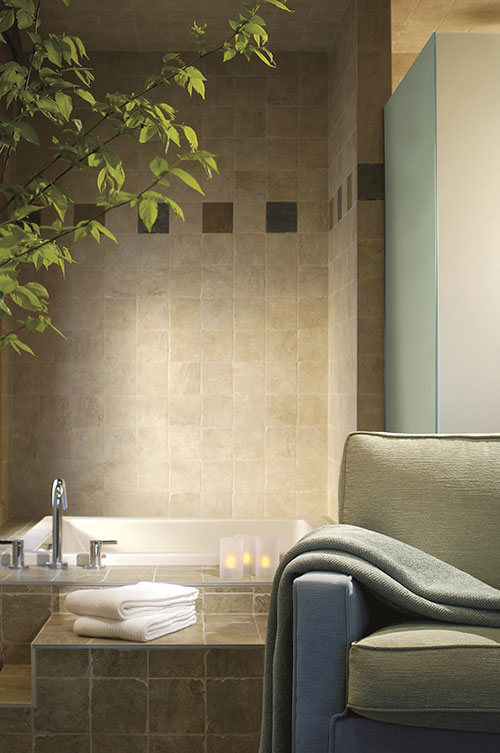