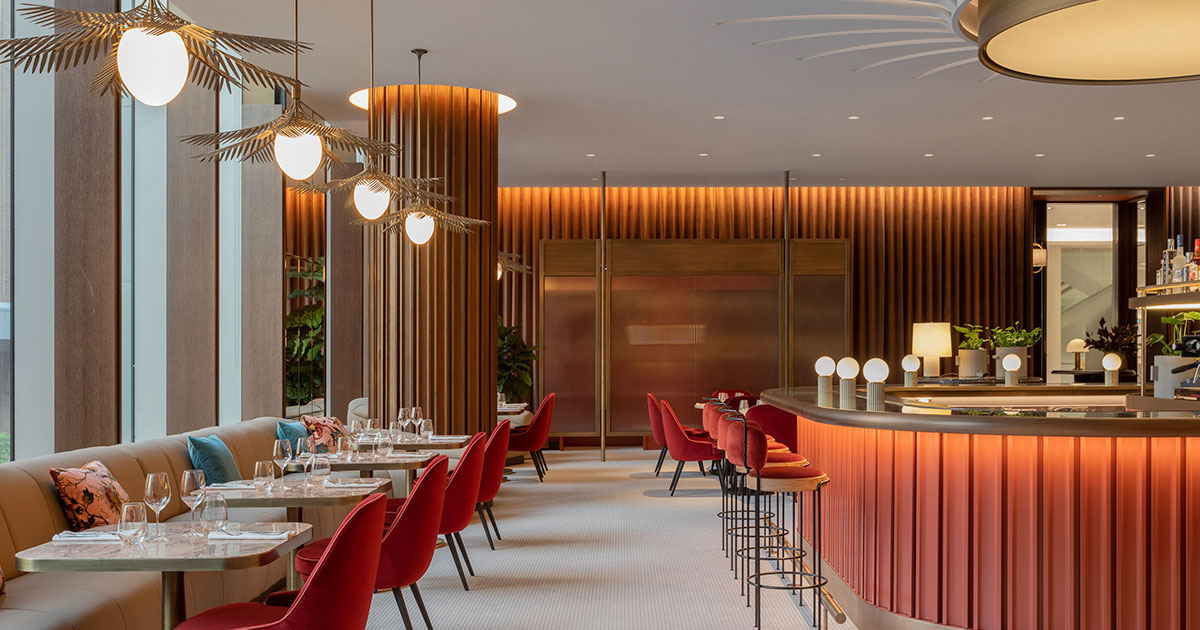 It’s after more than 2 years of work that the updated Holt Renfrew Ogilvy is finally unveiled. After the men’s section in spring 2019, it’s the turn of the Tudor room, the women’s section, the ground floor and, newly opened, the Café Holt, located on the 2nd floor, to reveal themselves.

The charm of 1940s Hollywood 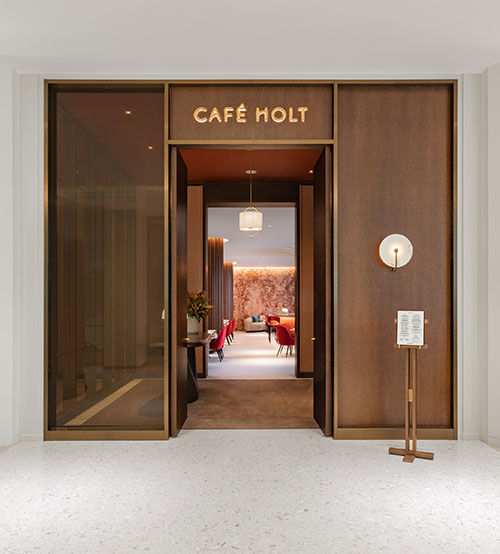 In order to find out more about the latter, we spoke with the new chef Yacir Nakhaly, who brings his knowledge of different starred restaurants and his Moroccan origins in this brand-new space inspired by art deco. European, 40s Hollywood and classic South American standards. 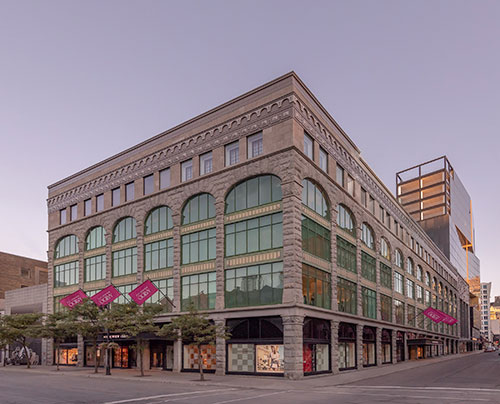 You’re probably wondering what the main variations are between this restaurant and the one at Holt Renfrew on Sherbrooke Street. First, New Chef Yacir Nakhaly brings his own culinary direction. “My goal is to use fresh local ingredients as well as to provide the restaurant with the expertise that I have developed during my culinary journey to create dishes that will surpass customer expectations” Yacir Nakhaly, Chef de Cuisine at Holt Renfrew Ogilvy. Note that the new design of the restaurant greatly differentiates Café Holt from its predecessor. A direct access with an elevator, without forgetting the view that overlooks rue De La Montagne, whereas previously you were under this same street.

Who says new restaurant usually says new menu, on the other hand, you know that many classics are difficult to do away with sometimes, what about Café Holt?

“This is essentially a 100% new menu. However we’re keeping a number of ‘classics’ reminiscent of the old Café Holt including the burger, steak and fries, and avocado toast. I’ve worked hard to refresh the dishes (including crab and burrata ravioli, crispy salmon and more) and put my touch to it.”Said Chief Nakhaly. 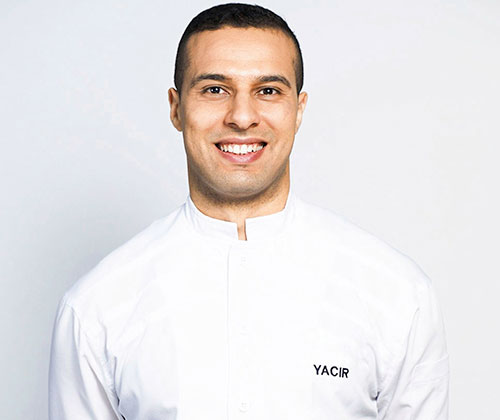 This is very interesting, but let’s cook for the chef a bit so that we can find out where his inspiration came from. Maybe a little word about his career as well?

“I was born in Morocco and studied at the Istaht University of Hospitality and Tourism in Marrakesh. I had the opportunity to start my culinary career in a 2-Michelin-star restaurant at the Hotel Martinez in Cannes, France. I then returned to Morocco to advance my culinary knowledge by working at the 5-star Eden Plaza Hotel in Marrakesh. I must say that my origins and my various travels have greatly influenced the new menu at Café Holt, an influence that comes from around the world to add them to Canadian dishes. I want with each bite, the customer tries to subtly detect each spice and ingredient and must search throughout their tasting in order to really guess what makes up the dish, it must represent a worthy experience and at the height of Holt Renfrew Ogilvy.”

A decor at odds with the old Café 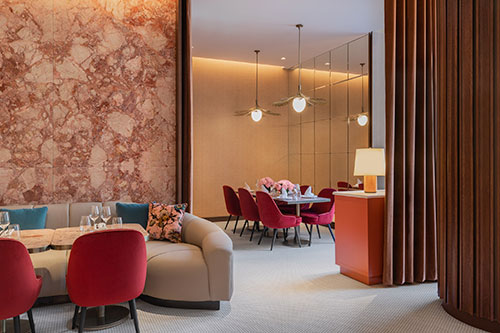 Speaking of Holt Renfrew Ogilvy, this original decor is at the opposite from the old one, how does this impact the dishes? Also, a whole new kitchen must be rewarding, what does that change for you?

“The relaxed and elegant atmosphere with an international accent influences my cuisine, which comes from all over the world, but with a local accent since I work with suppliers and producers from Quebec. The design of the new store is of a very high quality of execution allowing for a festive experience more suited to a gastronomic place. The gourmet food served is up to Holt Renfrew Ogilvy standards as goes the design. Its own identity allowing customers to enjoy a unique experience.”

The intricate combination of fine materials such as Breccia Pernice marble and the custom design of many decor elements, including sunlight above the bar, underscores Holt Renfrew Ogilvy’s heritage.

“Our ambition is for Café Holt to become more than a restaurant,” says Luis Laplace, architect of Café Holt. May it become a meeting place and a destination in its own right for Montrealers and guests of the city.”

This decor appears sublime, what can customers expect when entering? 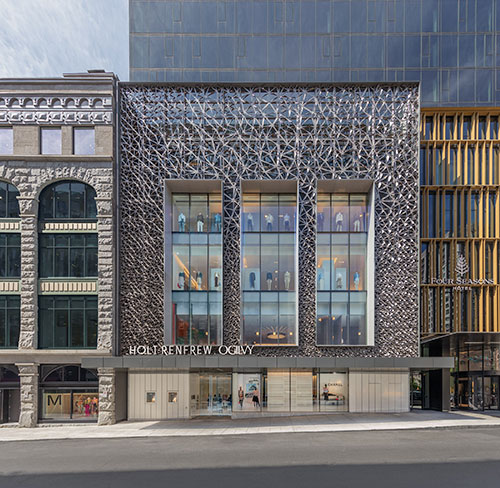 “In this decor designed by the Parisian firm Laplace, the design is warm and welcoming with an open dining room concept with the bar as the focal point and an absolutely magnificent light fixture in the heart of the restaurant. The idea is to offer a unique and timeless place to a varied clientele concerned with the aesthetics and comfort of the restaurant they select. The unique identity of Café Holt allows its customers to enjoy a unique experience in a privileged setting.”

And what will make the Café Holt noteworthy?

In fact, we’re in the high end. The Holt Renfrew Ogilvy luxury service standard, paired with a stunning modern design, freshness and new uses of local produce in the creation of our dishes, will keep people coming back again and again. A creative mixologist employs many different essences to elevate known cocktails and create original ones.

All this mix of flavours and inspiration has given you the taste, Café Holt is now open and waiting for you. Also, the Marcus at the Four Seasons Montreal is not far away to continue your evening!