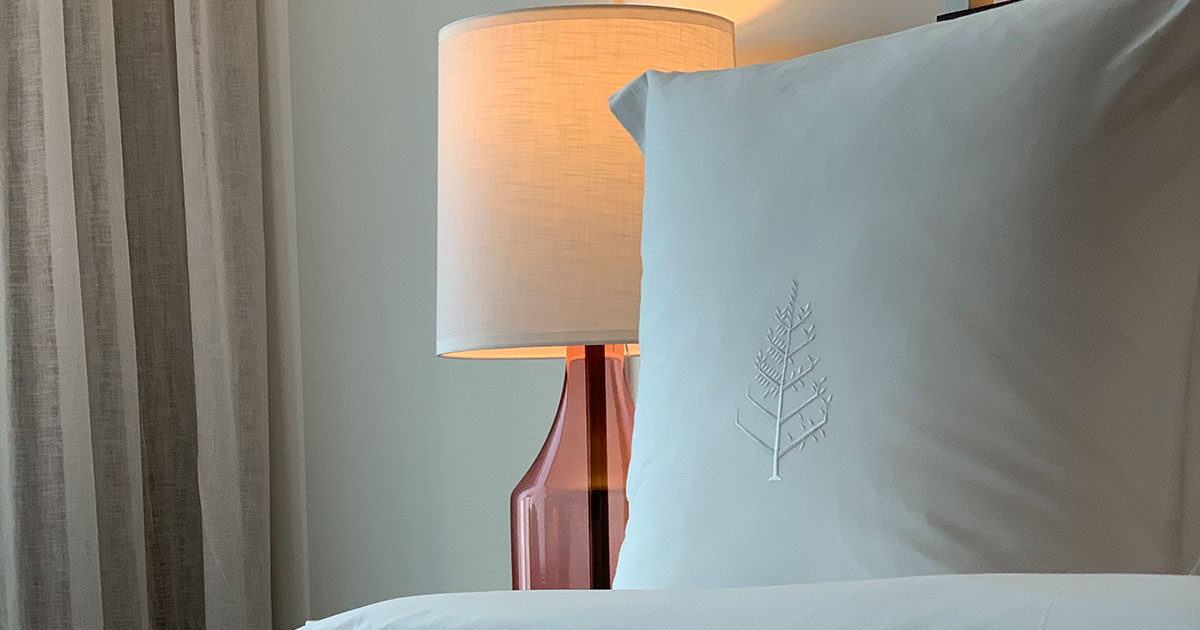 When it comes to Four Seasons and Montreal, it’s a long story, because it’s not Montreal’s first Four Seasons. From 1976 to 1994, the Hotel known today as the Omni, was The Four Seasons. The return of the banner after more than 20 years, under the internationalized name of Four Seasons, will do the greatest good to the city that badly needs to reposition itself in luxury. On May 8, 2019, the Four Seasons Hotel Montreal and Marcus Restaurant Marcus Samuelsson officially opened their doors. Follow us for the visit.

A simple and majestic entrance to the Four Seasons Hotel Montreal. 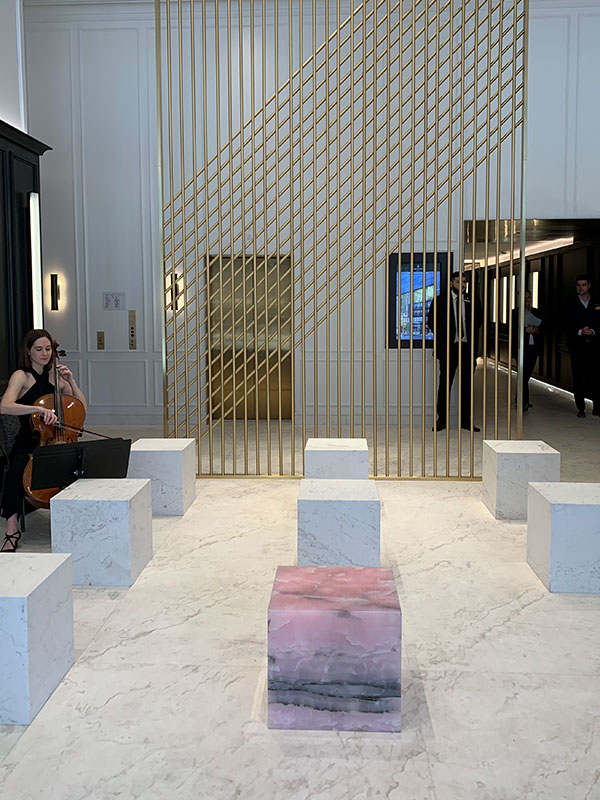 In a minimalist style with marble blocks and crystal when you cross the revolving doors of the establishment, we still notice the height of the space. On the other hand, this hall is only a prelude while one is greeted by a doorman. It is still a beautiful place where you immediately notice the Zen and relaxing side of the hotel. We will feel this side throughout our visit.

Le Carré Social, atmospheres for the day and the night

The Social Square is the focal point of the Four Seasons Hotel Montreal, be it the guests of the hotel or the visitors the bar and the restaurant, it’s here that everyone will pass. This square is divided into several spaces, all designed by Montreal designer Zébulon Perron 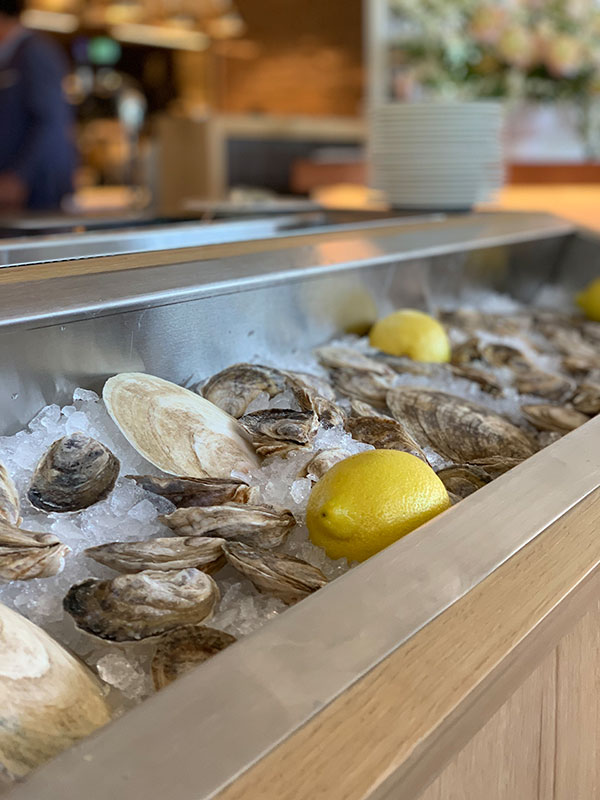 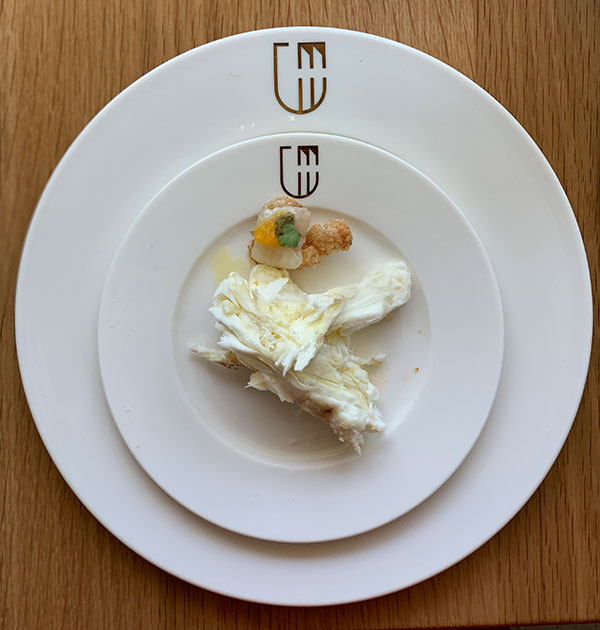 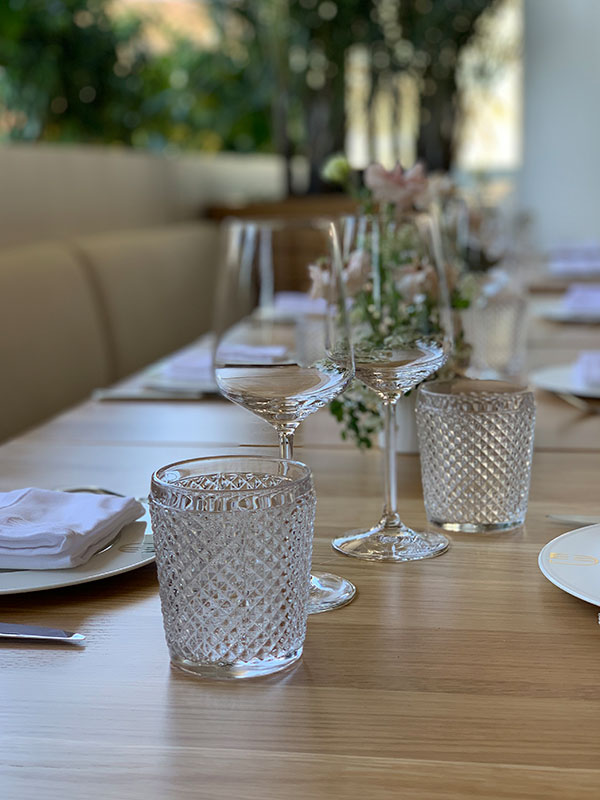 Here, it is the brightness that dominates. We are greeted with a mocktail made from cucumber and Fever-Tree, prepared by the bar team in place including Alexis Taoufiq, Gavin Miller, Jonathan Homier, and Drahos Chytry, headed by Dimitry Saint-Louis, Simon Lespérance and Simon Thibeault to name just these, we rediscovered the beautiful open kitchen and, for the first time, the view of the beautiful terrace that gives us the impression that it never ends, do not worry, it is glazed and heated in winter and in bad weather, and overlooks the west side of the city where one can see the beautiful Leonard Cohen mural to the south. On chef Samuelsson’s menu, highlighted by chef Nick Bramos, it’s the sea that dominates, and the local side, for example, we had a glimpse of Quebec salt-crusted halibut  and Prince Edward Island’s Raspberry Point oysters, and beet gravlax salmon. Everything was just perfect, as were the little sweets made of macaroons, chocolate mousse and tarts. The desire to test the menu is only greater. Our afternoon was perfect thanks to the champagne Ruinart which flowed during the opening. 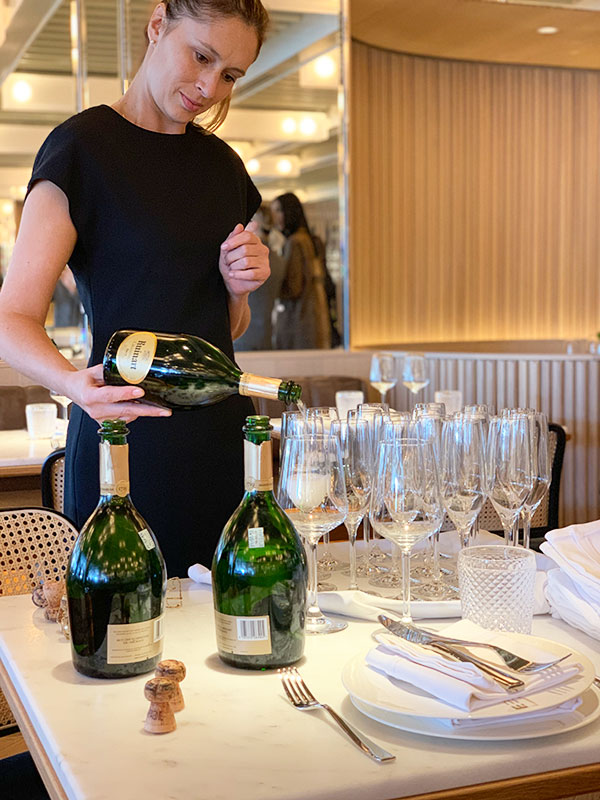 The Ruinart Champagne was served to the guests
Photo: Normand Boulanger | Gentologie 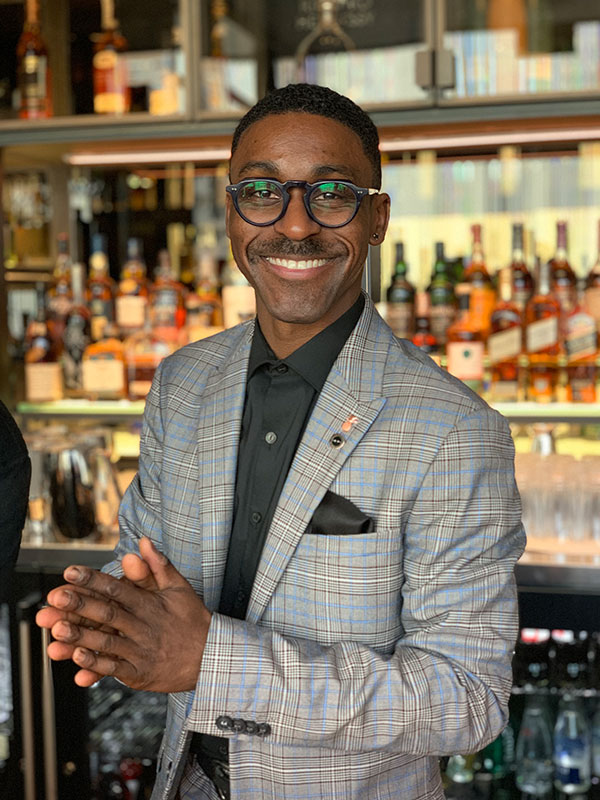 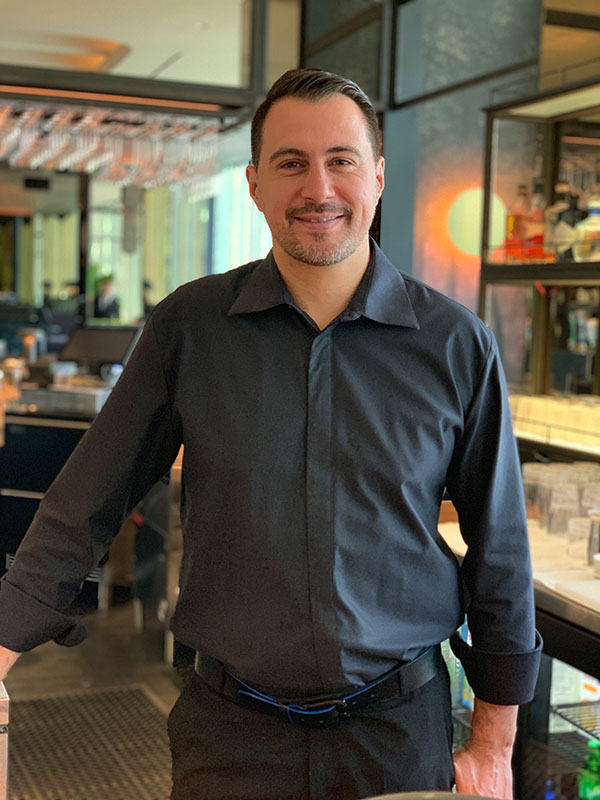 The natural side and the nobility of the materials stand out in the place. Illuminated by the light that enters the place, but also by the pale colors that will give the food all the space. The wood of the tables, the vegetation, the white, the rose. There is nothing aggressive. The bar which is back to the terrace will probably be one of the most popular places during the summer. We can hardly imagine all the photos coming out of this place, moreover the president of Carnbonleo and owner of the building, Andrew Lufty, did not hide it, he wants the Four Seasons to become the most popular hotel of Montreal on social networks. Note that the restaurant serves all meals of the day. 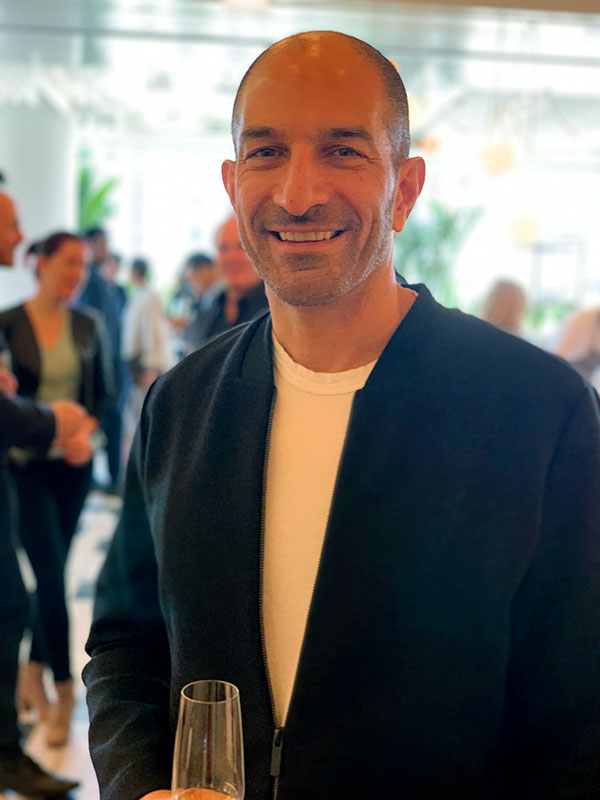 Marcus, also in the bars. 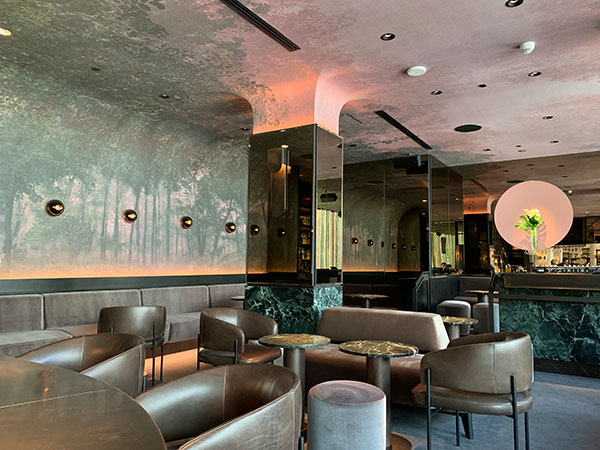 Then we go to the east side of the hotel, still on the 3rd floor where the bar is located. The latter offers a day and a night side. Two completely different atmospheres, but with the same impeccable service that we could test. By the way, one of the cocktails will be in an article next week, but I’m not telling you more for now. The crystal curtains marry the light to bring out the different colors of the rainbow. The day side is perfect for a lunch on the tables or at the bar, while the raised night side gives you a touch directly in the eyes of the bartenders, and transports you into an enveloping atmosphere with a more relaxing design with generous tapestries with vegetation motifs. 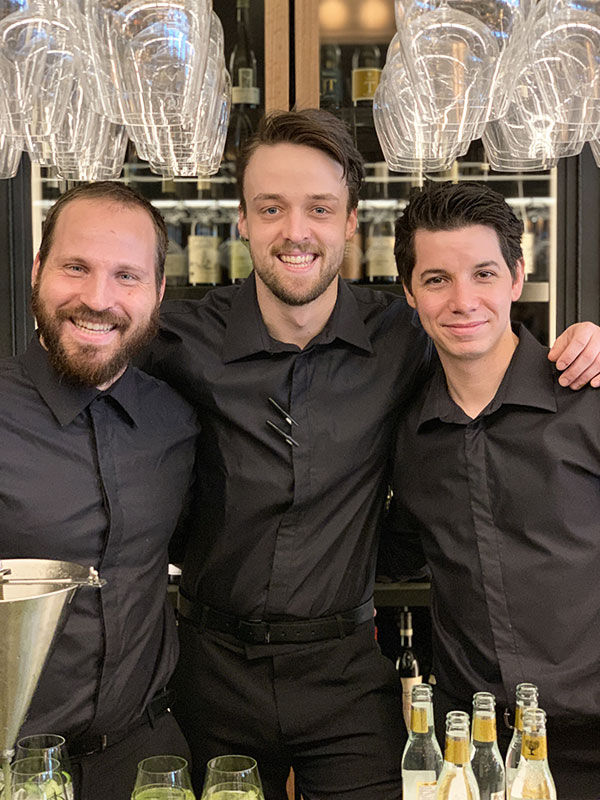 The lounge. Rest and meeting on the horizon

The lounge, located in front of the reception area, is the perfect place for relaxation. Whether it’s just to take a break from the electrifying atmosphere of the city center or because you’re waiting for your friends to have a drink or dinner at Marcus, its enveloping atmosphere will transport you to this perfect haven. Remember that this floor, the 3rd, connects directly with the men’s department of Holt Renfrew Ogilvy. All these spaces are signed Atelier Zébulon Perron. 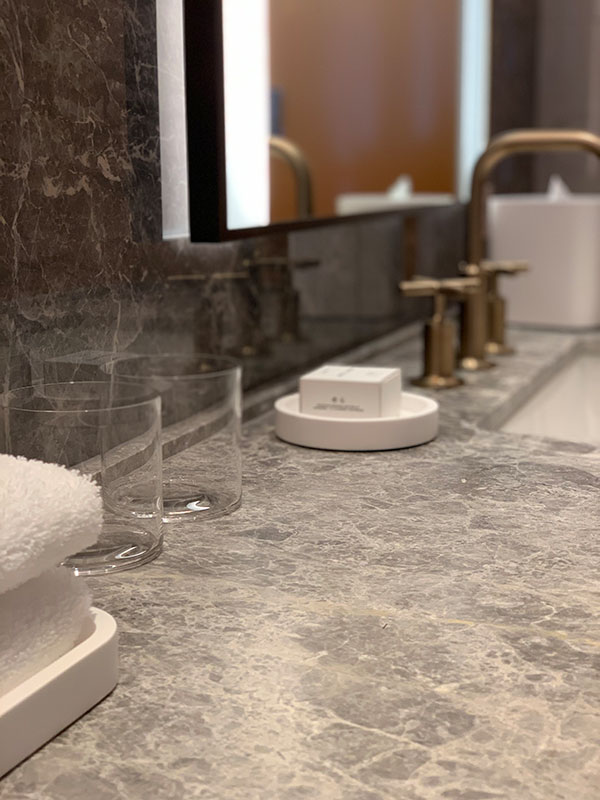 The Bathroom of the Suite
Photo: Normand Boulanger | Gentologie

These last, work of the Parisian firm Gilles & Boissier, in collaboration with the architect and Montreal designer Philip Hazan, are simply perfect. Here, the relaxation dominates. In these rooms, 169 in total, we feel that the rest has been put forward. While hotel rooms are usually found in masculine atmospheres, they have a more feminine design. It is easy to notice; be it in the curves, the canopy beds, the pink, copper, golden, white and cream colors, the sofas, the offices, it is the relaxation and the comfort of the customer which counts. We imagine that after a breathtaking day downtown or several hours of flight, customers will want to find themselves in a small cocoon resting. Moreover, the products in the bathroom are BYREDO brand, founded by a Canadian-Swedish. They are also present at the Bisha Hotel in Toronto.

For the Minibar, it’s made up of Bombay Sapphire, Gray Goose, Johnnie Walker and Quebec’s Cirka for gin. There is also a Nespresso machine in each room. In the Carré Doré rooms located on the highest floors of the atrium level building, you can admire the grandiose artistic installation of Pascale Girardin named Contemplation, which represents the four seasons; there are also Four Seasons Executive Suites that allow you to separate the living area from the sleeping area; as well as the future elegant Presidential Suite which will be made of two bedrooms on the top floor, and which will offer a full-size dining table and a service kitchen with separate entrance, ideal for entertaining guests. Some suites, including the presidential suite, are not over, they will certainly be over for the weekend of the Grand Prix, where the Four Seasons Hotel Montreal will hold the Formula 1 Grand Prix opening night with Mercedes-Benz. Pet owners and parents: do not worry, different arrangements are offered for your little humans or your furry friends. 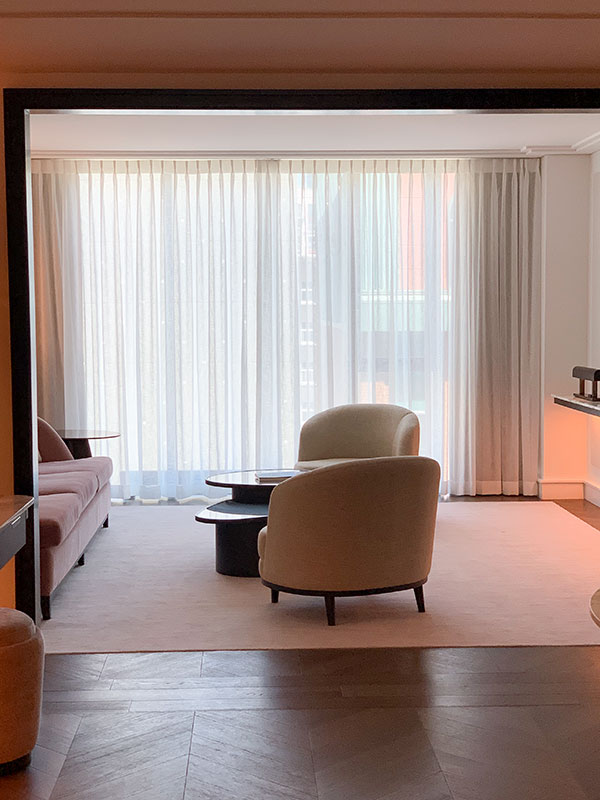 The Living room in a suite
Photo: Normand Boulanger | Gentologie 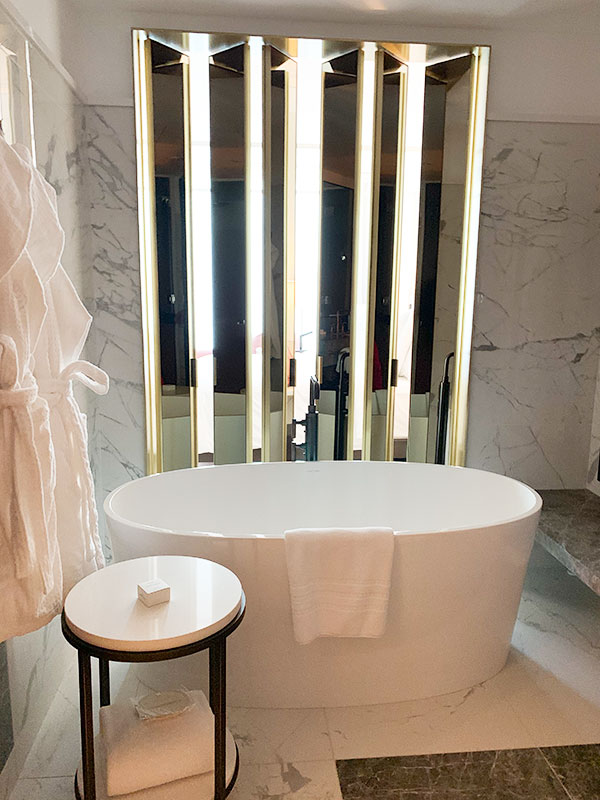 The Spa at the Four Seasons Hotel Montreal: Meet you zen side. 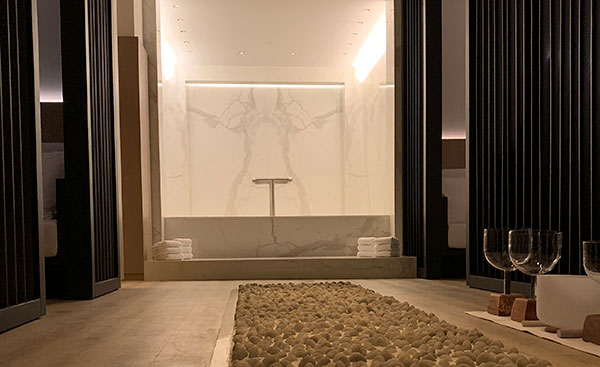 The Kneipp Hydrotherapy at the Spa
Photo: Normand Boulanger | Gentologie

If you thought the rooms were relaxing, it’s because you have not set foot in the spa yet. Always in relaxing tones, it is the perfect place to disconnect. A course quite different from what you think you know. The eight treatment rooms, including the Golden Square VIP Suite for two, have their own discreet entrance guaranteeing complete privacy and even a bath. The Four Seasons Spa team under the direction of Geneviève Poulos offers a very special social experience. It is Keipp hydrotherapy, the only facility of its kind in the city. The latter emphasizes the therapeutic virtues of hot and cold water. A reflexology trail, with stones, feet leads to the therapy pool whose large waterfall is an element of the original method developed by Sebastian Kneipp in the 19th century. It is very impressive. You’ll also find a sauna, hot tub and relaxation areas, a state-of-the-art gym designed by celebrity trainer Harley Pasternak. A swimming pool lit by a skylight and equipped with a counter-current swimming system will be functional within a few days / weeks. It was not open during our visit as the work in this area is not completed. 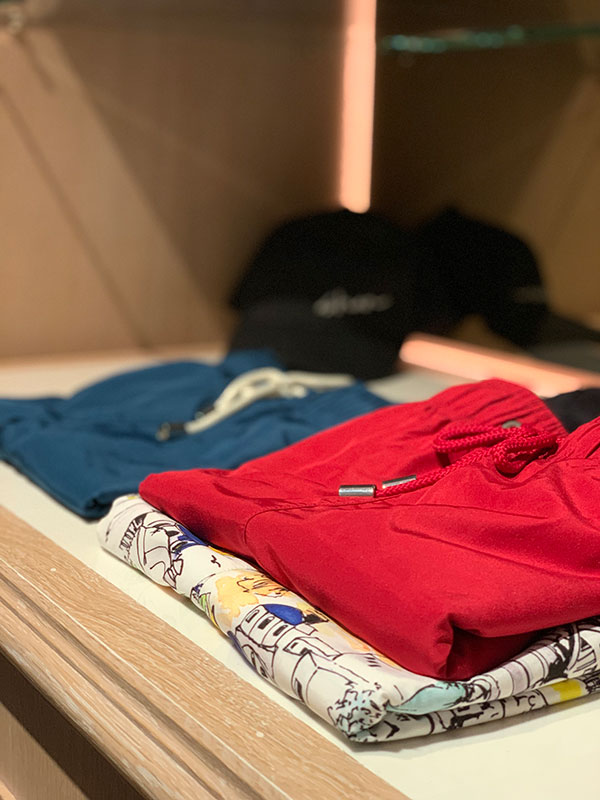 In addition, a range of carefully selected products is offered at the Spa: Omorovicza, a line of Hungarian skincare products, exclusive to the Four Seasons in Montreal, including the Gold Hydra Lifting Facial. 111SKIN is another results-based line of care created in London, England by cosmetic surgeon Dr Yannis Alexandrides at his clinic on Harley Street. And finally, the Spa team is proud to offer PEONI by B Skin Guru, a line developed by Montreal skincare expert Jennifer Brodeur.

The Four Seasons Hotel Montreal, the perfect luxury for Montreal.

The place will undoubtedly be one of the most visited places in Montreal this summer. The terrace will probably be a big hit and you’ll probably spend a lot of money on it, because everything we’ve tasted, like salt-crusted halibut and desserts, was just perfect. We are not in a luxury Vegas style, personally, I do not think that this kind would have worked in Montreal, we are in a new luxury, far from sequins, gold, foil, extravagance. We are rather in the luxury for its refinement, in its excellence at the level of the service pushed to the extreme, and the customization to serve perfectly the customer. The touch necessary that makes it the perfect hotel for Montreal. When leaving, do not forget to visit the brand new SAQ.

A more in-depth interview with Chef Marcus Samuelsson will follow in a few weeks.

Also our guide, The Montreal Luxury Journey will be online soon.

Stay informed by subscribing to our newsletter.