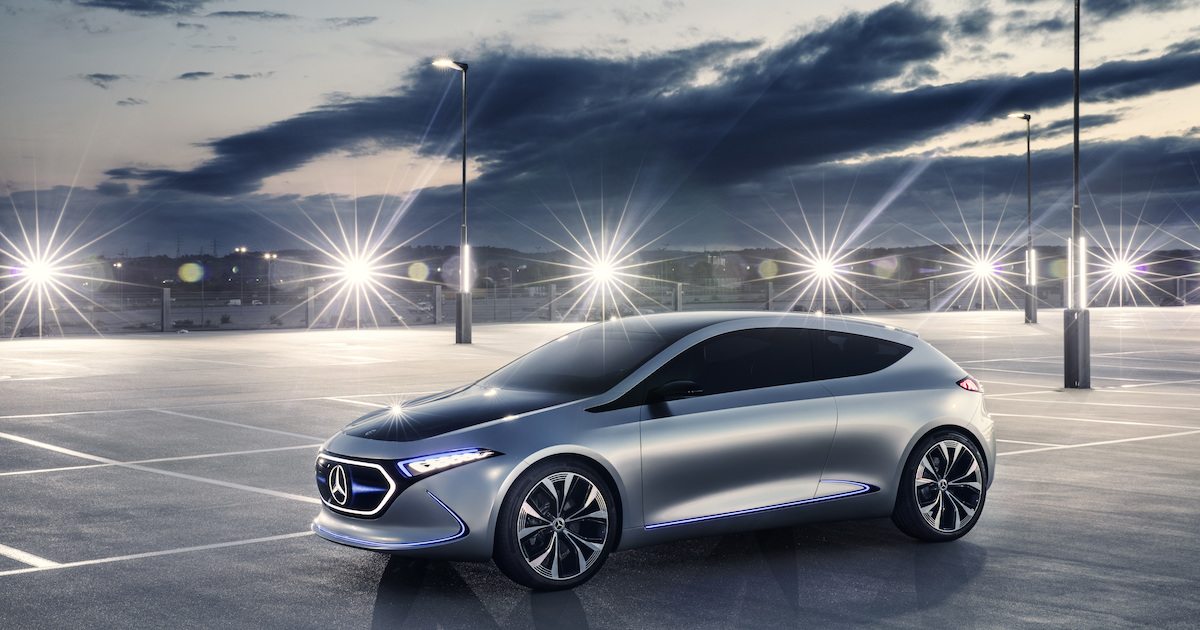 Well no, we are not talking about the new iPhone X, not right away at least. We talk to you about a car because it’s been a while since we’ve talked about it, and when you’re in the electrical field, it’s even more fun. We already talked about the electric BMW i8, but today we are switching from German to go with the unveiling this morning of the Mercedes-Benz Concept EQA, its first all-electric concept car in its segment of compact cars.

What is good in concept vehicles like the EQA and which is a bit flat too, is precisely the concept. Often, we find it a shame not to have it right away on the road, but we can also see this as a positive. To see Mercedes-Benz (excluding the smart) make an all-electric concept car while no electric vehicle in the range is electric in Canada (the B-Class is available in electric version in the US) is quite surprising. I imagine this is an indication of where most luxury builders are going, and this is probably due to Tesla and its all-electric fleet. But also, the concept cars allow us to see some innovations that will come on the next vehicles of the range, and sometimes faster than is believed.

“Our electric initiative is gathering pace: by 2022 Mercedes-Benz Cars will have launched more than ten all-electric vehicles on the market. And the Mercedes-Benz Concept EQA proves that we are serious about introducing electric mobility throughout the portfolio.” Dr Dieter Zetsche, CEO of Daimler AG and Head of Mercedes-Benz Cars 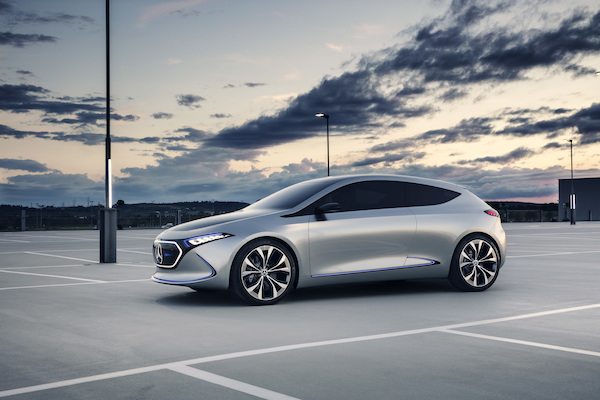 Let’s start with the light of the Mercedes-Benz Concept EQA. 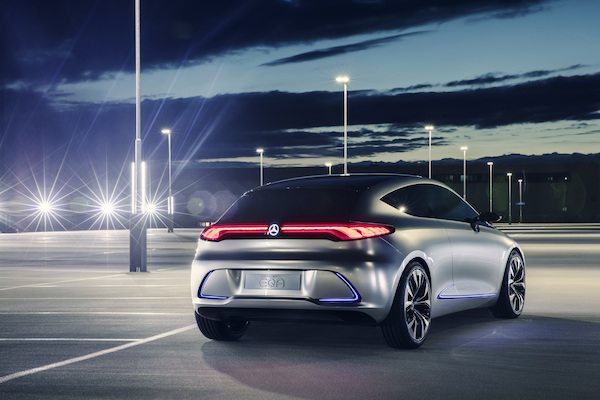 As can be seen in the video above, the movement is very present in the lighting of the vehicle, the whole is made using laser fibers. The spiral-shaped light signature translates the electric gait: on the visual plane, it recalls the copper coils of an electric motor and evokes the electrical impulses in the form of animation.

Now to the engine of Mercedes-Benz Concept EQA. 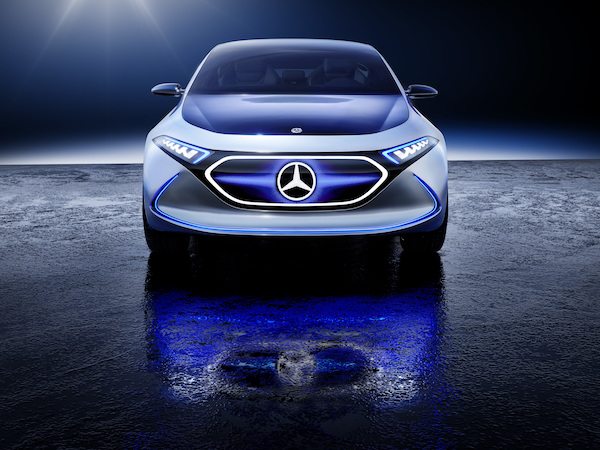 We are in a powered car. They are two electric motors whose combined power can exceed 200 kW. All this is achieved by progressive battery components as well as permanent all-wheel drive. One can be sure that they are the guarantee of dynamic behavior energetic. Two driving programs are available to adjust the driving characteristics according to your personal preferences. Always at the level of the engine, the vehicle is adapted to a daily use thanks to a great autonomy. In conjunction with Mercedes-Benz’s intelligent operating strategy, the Mercedes-Benz Concept EQA  displays no less than 400 kilometers depending on installed electrical capacity. 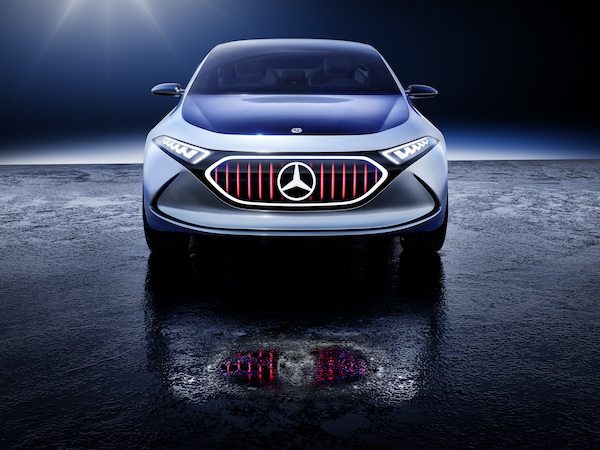 A recharge all comfort: the Concept EQA is rechargeable by induction or via a wall box. We were talking about the iPhone rather, it’s exactly the same concept as the devices advertised today. The Concept EQA also has the pre-equipment for a quick recharge. Continuity in the recharging process (seamless charging) is a promising idea for recharging on public terminals. It is quite complex because the boundaries of the different vilels are property of different entities, which makes the experience less pleasant. Therefore, this service “Mercedes me” allows the customer to refuel and pay with ease on the various charging stations. A great idea from Mercedes-Benz.

The aesthetic of Mercedes-Benz Concept EQA. 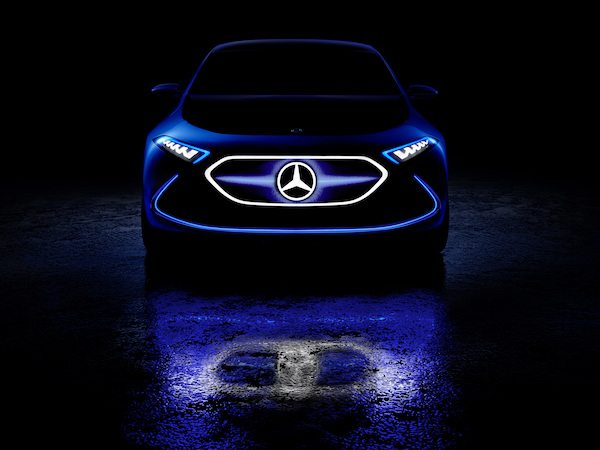 When we talk about a concept vehicle, it is often this point that we notice first. The Concept EQA is no exception to the rule by illustrating the evolution while remaining simple. It should be noted that the most and the lines of the vehicle are limited for a pure surface. The “Black Panel” front surface acts as a virtual grille whose appearance changes according to the selected driving program.

“With our Concept EQA we have reinterpreted our design philosophy of Sensual Purity and developed the Modern Luxury into a Progressive Luxury for our EQ brand. We eliminated creases and lines and reached the next level of purity”, says Gorden Wagener, Chief Design Officer Daimler AG. “With its stunning proportions, seamless flowing surfaces, combined with stimulating graphics using high tech black panels, it is definitively a bold design statement: this car is simply sexy.” Gorden Wagener, Chief Design Officer, Daimler AG

Pin this photo on your Pinterest’s Car board 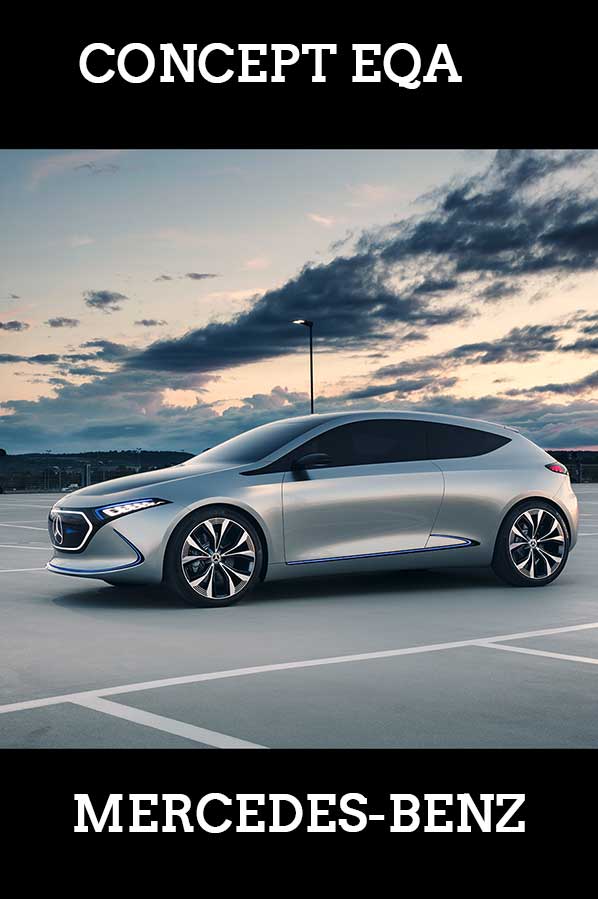 The Weeknd and Mercedes-Benz : It’s Electric