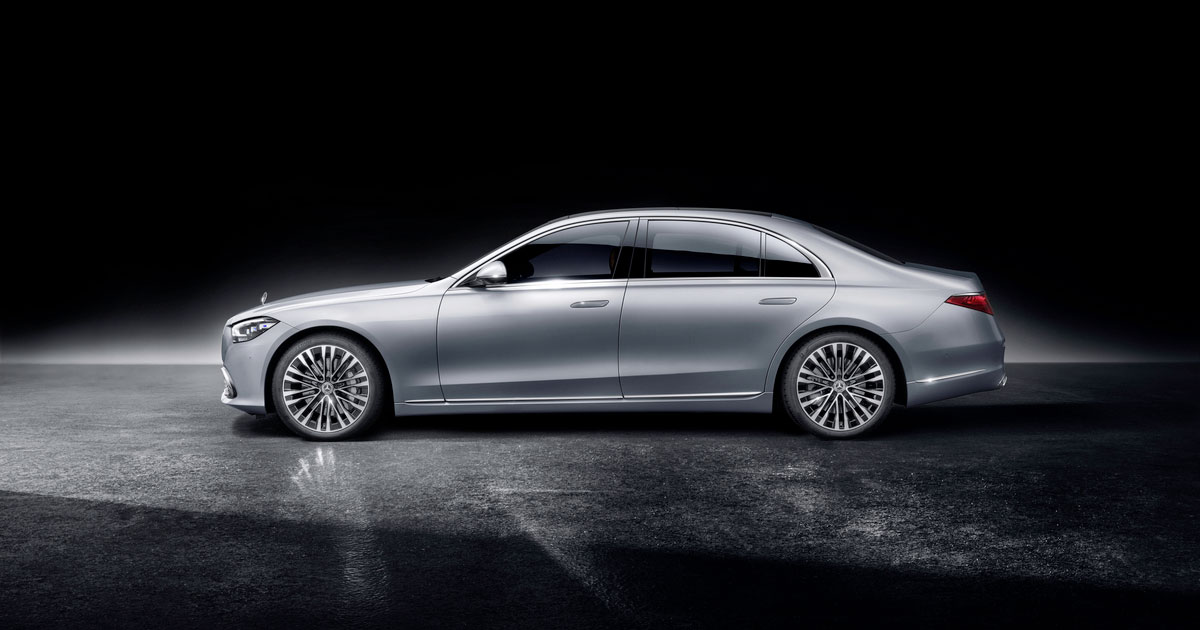 When we talk about luxury sedans, often only one name comes to mind, the Mercedes-Benz S-Class, nothing comes closer to my opinion, at least in its very “business” car style. and less lifestyle or sporty. It’s really a car where you will appreciate being seated in the back. Here is its most recent version.

First, we will soon see an electric version in this model. Also, the second generation of MBUX (Mercedes-Benz User Experience) debuts in the new S-Class. Another milestone as the interface between the driver, passengers and vehicle: there are up to five screens on board, some with OLED technology. 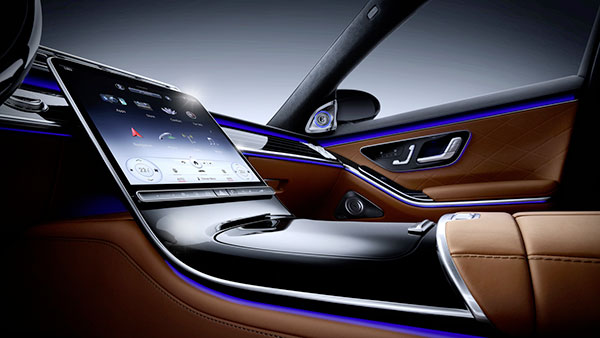 At the touch of a button, the new 3D driver display for the first time allows spatial perception of the scene with a real 3D effect thanks to eye-tracking. A similarly impressive feature is the very large head-up display with augmented reality content. When navigating, for example, animated turn-off arrows “fishbones” virtually appear via the head-up display and are precisely projected onto the road lane. 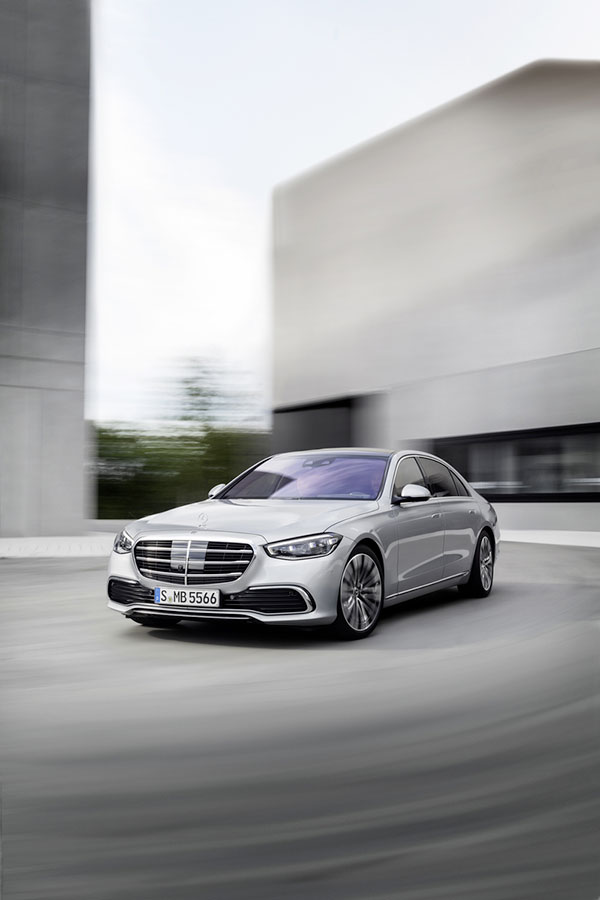 Using cameras in the overhead control panel and learning algorithms, MBUX Interior Assist recognizes and anticipates the wishes and intentions of the occupants. It does this by interpreting head direction, hand movements and body language, and responds with corresponding vehicle functions. For example, if the driver looks over his/her shoulder towards the rear window, Interior Assist automatically opens the sunblind.

The active ambience lighting with around 250 LEDs is now integrated into the driving assistance systems, and is able to reinforce their warnings visually. In addition, feedback is possible when operating the climate control system or the ‘Hey Mercedes’ voice assistant, for instance.

The latest generation of the Driving Assistance Package has new and numerous improved functions. One example is predictive compliance with speed limits. The new assistance display in the driver display clearly shows the operating principle of the driving assistance systems as a full-screen view. 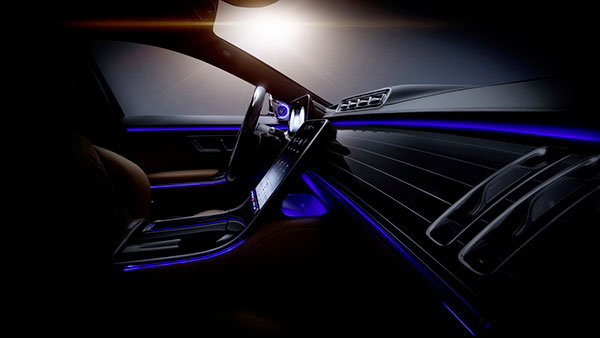 During severe frontal collisions, the rear airbag–standard equipment for the S-Class with long wheelbase– can considerably reduce the loads acting on the head and neck area of the seat-belt-wearing occupants in the outer rear seats. The frontal airbag for the rear seat deploys particularly gently thanks to its innovative construction using a tubular structure.

Thanks to optional rear-axle steering, the S-Class is as manoeuvrable as a compact car in the city. The steering angle at the rear axle is up to ten degrees. Even for the S-Class with a long wheelbase and all-wheel drive, the turning circle is reduced by 1.9 metres to less than 10.9 metres.

When a side impact with another vehicle threatens, the vehicle body can be raised by the E-ACTIVE BODY CONTROL suspension (optional) within a few tenths of a second. This is a new function of PRE-SAFE Impulse Side: It can reduce the loads acting on the occupants because it directs the impact forces towards particularly resistant structures in the lower area of the vehicle. 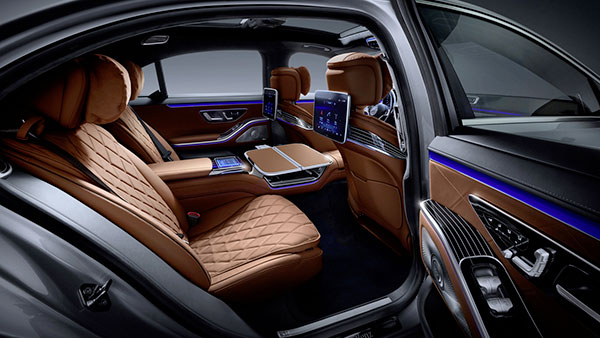 The seats literally invite the occupants to sit down and relax. The flowing, three-dimensional layer design theme gives an impression of lightness. Different finishes give the seats different characters. For example, the flowing longitudinal piping of Lugano leather lends them a noble, avant-garde look, while the progressive diamond pattern of nappa leather and Exclusive nappa leather is more classical and expressive.

Up to 19 motors in the front seats make for comfortable seating – a number that indicates the complexity of the technology installed in the seats. Yet comfort is not enough: the seats also play a major part where safety is concerned. And of course when it comes to luxurious wellbeing: all the seats available for the S-Class carry the seal of approval by the Healthy Seating campaign.

Ten different massage programs are available in the new S-Class. These use the vibration motors, and can enhance the effect of a relaxing massage with warmth on the hot-stone principle. To this end, the seat heating is combined with the inflatable air chambers in the active multicontour seats. The air chambers are now closer to the seat surface, and are therefore even easier to control and feel. 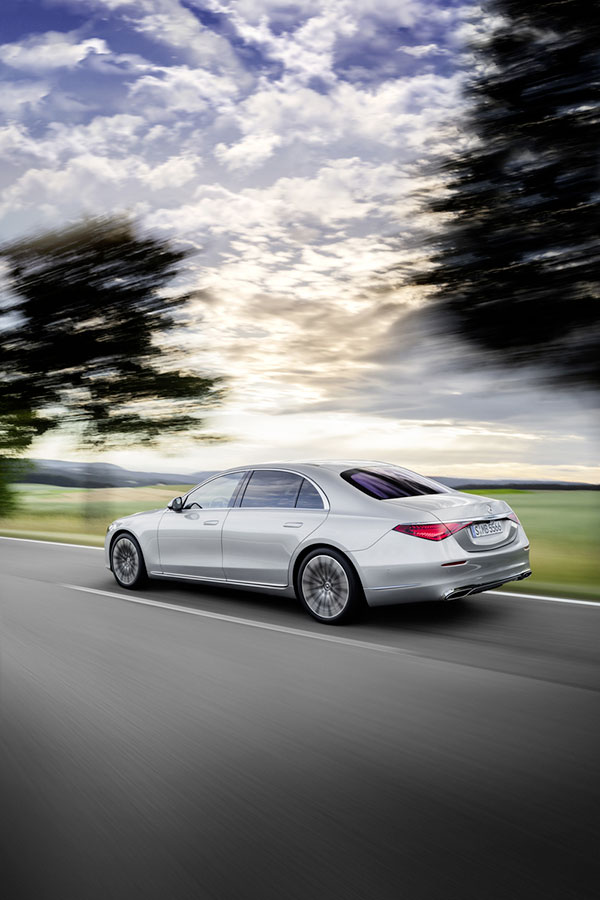 Five different rear seat variants make it possible to configure the rear of the S-Class as a working or rest area. One new feature is the heatable additional cushion for the head restraint, which is available for the two electrically adjustable rear seats. The adjustment range and angle of the front passenger seat in the chauffeur configuration and the reclining seat behind it have been improved as well.

Digital lights at the heart of the Mercedes-Benz S-Class 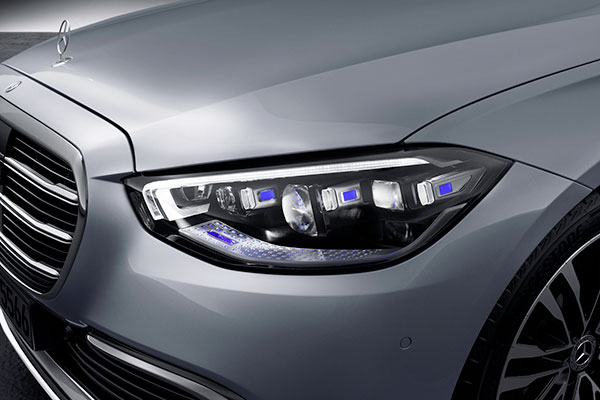 The optional DIGITAL LIGHT system enters series production for the first time at Mercedes-Benz. In each headlamp, DIGITAL LIGHT has a light module with three extremely powerful LEDs with light that is refracted and directed by 1.3 million micro-mirrors. The resolution is therefore more than 2.6 million pixels per vehicle. This allows highly precise light distribution. It makes Highbeam Assist over 100 times more precise then 84-pixel light when excluding oncoming traffic or road signs from the light beam. Light/shadow graduations and the light distribution of all the other adaptive light functions are also realised with considerably more precision, optimising illumination by e.g. fog light, motorway light or city light. 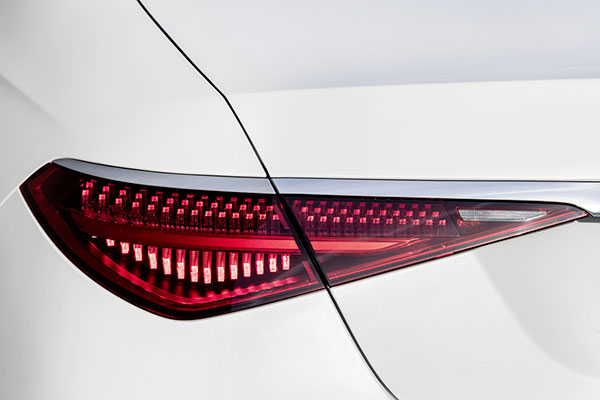 Thanks to LED technology, the new S-Class has also taken a leap forward in its interior lighting: Mercedes-Benz has now realised interactive interior lighting for the first time. The active ambient lighting (optional) is now integrated into the driving assistance systems, and is able to reinforce alerts visually. This also makes corresponding feedback possible for the comfort systems. This applies to the climate control system or the ‘Hey Mercedes’ voice assistant. Something to get you noticed in complete safety.

Suggestions for a Gourmet Valentine’s Day