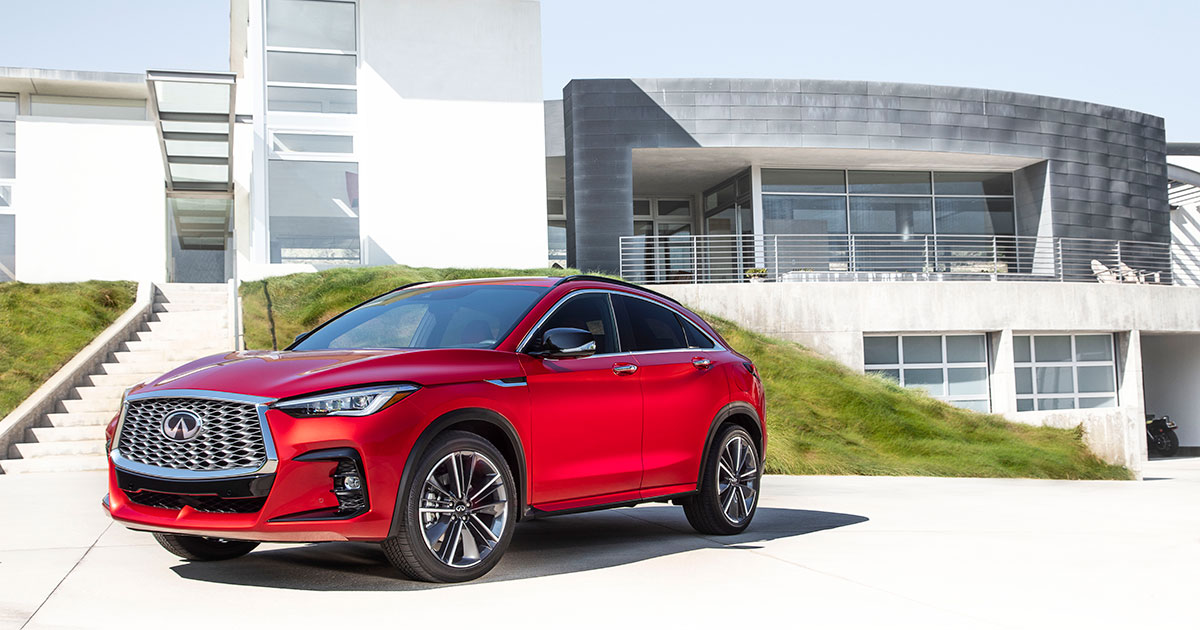 Luxury brand Infiniti really needs a boost. Not that its cars are not competitive, but it is slow to find the niche that will allow it to enter the market. The annoying tendency of its leaders to compare its sedans and SUVs to German counterparts is doing it a disservice. Because the Germans are popular when it comes to buying a vehicle with dynamic driving, however, despite all its efforts, Infiniti’s primary goal is comforting. But sometimes, the recipe pays off, as with the all-new Infiniti QX55 2022.

The coupe sport utility vehicle does have a more aggressive silhouette, but it is clearly aimed at people who prefer a good time behind the wheel rather than the feeling of endless racing. 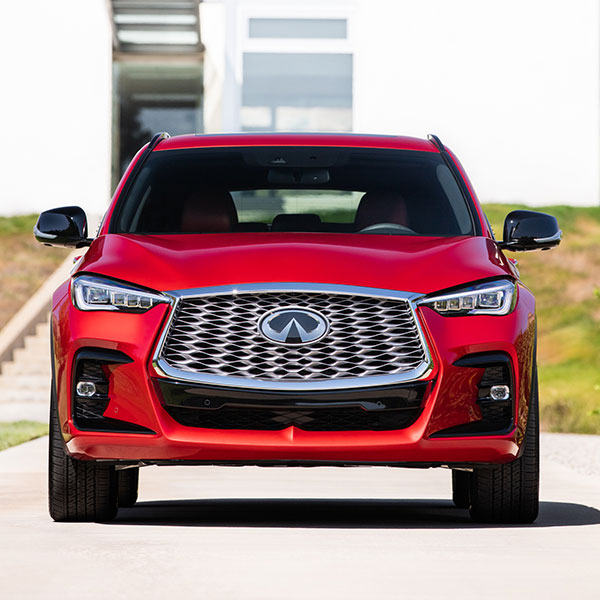 The fashion for coupe SUVs is impressive. In recent years, Mercedes, BMW, and even American manufacturers have turned to this type of bodywork that partially takes the lines of an SUV by amputating its rear space. The idea is to bring the roofline down to make it look more dynamic.

However, few people remember it, but it was probably Infiniti that started the trend with its late FX, a vehicle that took precisely this principle, but that was not named in the same way.

This time, we are not shy. It is loud and clear that the QX55 incorporates elements of the traditional QX55 utility, however, showing a more refined silhouette. The result is, let’s face it, absolutely charming. In fact, few vehicles in just a few days of testing have earned me so much praise on the looks. It is true that the blue-grey colour also had something to catch the eye. Not to mention the driver, I say modestly…

The grille is that of the Infiniti family, the headlights and the hood too, but we feel the lightness that other models do not provide. Obviously, lowering the rear section has the disadvantage of reducing cargo space a bit (you lose 13%) and lowering the clearance for oversized rear passengers. However, the situation is far from really disturbing.

A nice cockpit, but… 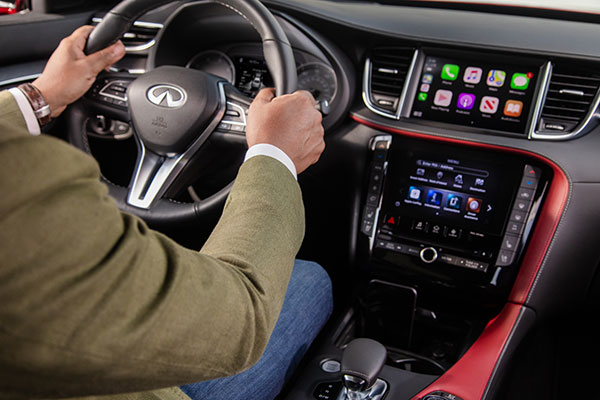 I’m a huge fan of modern infotainment systems. I love the easy-to-use systems with a contemporary look. Infiniti’s, unfortunately, only partially meets these conditions. Its dual screen, copied from that of the QX50, does not facilitate use and ergonomics, not to mention that it takes up too much space in the centre console.

Innovative a few years ago, this kind of system now seems outdated. Too bad because the rest of the cabin benefits from a high-end finish. My black and red leather interior offered a dramatic contrast and truly enhanced the overall value. 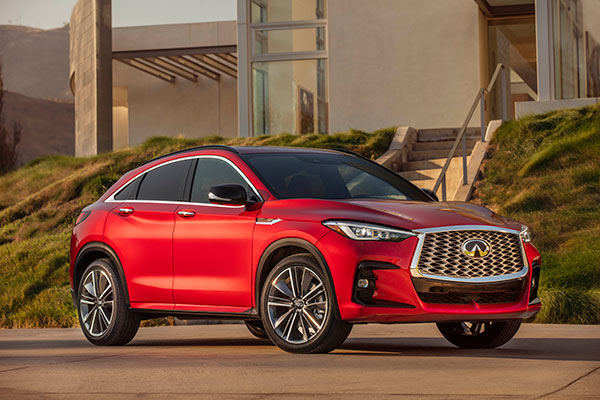 Under the hood of this Infiniti QX55 2022 hides, one of the company’s finest finds: a turbo engine called VC 2.0. It is a 2.0-litre, variable-compression four-cylinder, one of the few systems of its kind in the world. It maximizes power while minimizing fuel consumption.

Admittedly, the result is surprising. It is lively, nervous and not greedy … but a little asleep by a continuously variable automatic gearbox. True CVT enthusiasts are rare. Yes, it promotes better control, but sometimes it feels like it is absorbing some of the engine’s energy for no reason.

The good news is that it has been redesigned, according to Infiniti, for the QX55. Admittedly, the mock runs are still problematic at times, but overall she performs well. The reality, however, is that unless you really want to be critical of the vehicle, you probably won’t realize it. 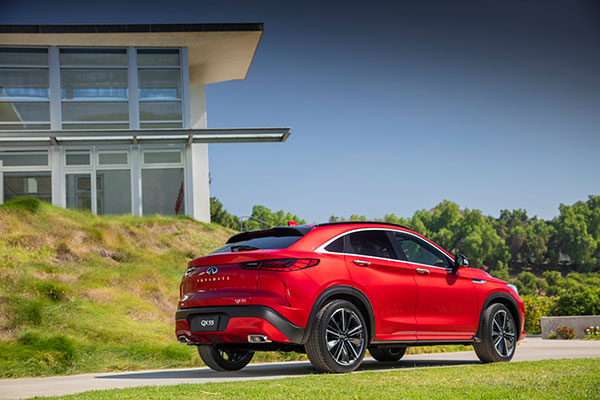 The nuance appears especially in sport mode when we insist on acceleration. However, despite the presence of efficient all-wheel drive, the Infiniti QX55 is first and foremost, a city utility geared directly towards comfort. Even the manufacturer says it loud and clear.

It’s driving, without being sporty, is precise although not communicative enough. Everything in the QX55 is geared towards comfort. In this area, there is nothing to complain about and everything executed as it should.

The Infiniti brand doesn’t often get the attention it deserves. The Infiniti QX55 2022 Coupé may well be the key to gaining access to new customers and new buyers who will discover the brand. 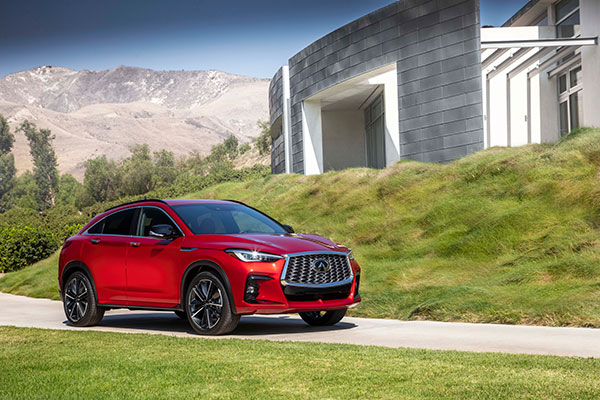