We have to be concerned about the environment, everyone agrees. The trend is for electric cars, less pollution on the road. Some models, however, resist the electrical assault (at least for the moment), in favor of exceptional off-road capabilities, and a more military look. This is the case of the Mercedes-Benz G Class 550 2020, the famous G-Class, whose real name is Geländewagen—Off-road in English. 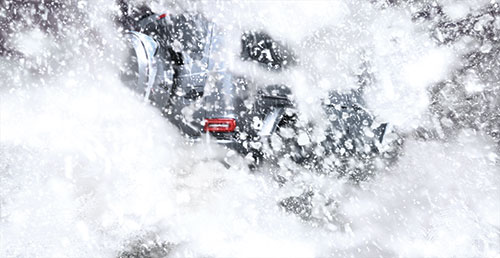 It is easy to blame the big vehicle consumption too high, or dimensions, let’s face it, very impressive. But taking the time to know him, we come to appreciate this mastodon, not so heavy after all.

The one that had hardly evolved since its creation, thirty years ago, has undergone a facelift. In fact, the engineers of Mercedes-Benz started from a blank sheet. They, of course, had to respect the basic characteristics of this impressive vehicle, but they had full latitude to modernize it.

One can certainly say Mission accomplished. The new G-Class has resumed the very square lines of its predecessor, it shares absolutely no component.

It was offered a new chassis, more rigid, but lighter. New mechanical components have also been used, including better adapted suspensions and a direction that no longer resembles that one of a school bus.

In fact, the older generation relied on a ball steering, the only one available to my knowledge, and suspensions so clumsy that they dragged the vehicle in a roll impossible to control at each dynamic bend. Today, forget this cash movement. Everything is rigid and remains in place, while the car takes the desired course by directing the fingertips, or almost.

Add to that its extreme off-road capabilities, courtesy of a faultless 4 × 4 gear train and three lockable differentials, not to mention the 236 mm ground clearance, and you’ll have a good idea of what you’re capable of going through with such a large vehicle.

The version of the Mercedes-Benz G-Class we tested was equipped with the “basic” engine, a 4.0-liter V8 producing 416 horsepower and 450 lb-ft of torque in an extremely favorable engine speed range. Add this to a 9.0-speed automatic transmission, and you’ll come up against amazing power despite the size of the vehicle. It should be noted that the new version has lost more than 180 kilos!

Performance buffs will opt for the G63 AMG and its 577 horsepower, but you have to really want it. Because despite its new dynamic qualities, the large SUV continues to be an impressive vehicle first. And already, with the G550 version, I could not do better than 19.3 liters per 100 km on average.

The interior is neat, almost as luxurious as the S-Class, and the controls are the same as in all Mercedes vehicles. Note here that ergonomics is not always the appointment despite the sophisticated look, and sometimes you have to do some research in the menus to get the desired functions, but the style is nice and the quality undeniable.

However, taking the road at the wheel is an experience. The size of the vehicle, its range and the athletic feeling it gives it give it a stately personality. The driver is easily taken for a real adventurer, and one begins to want to prolong the hike simply for pleasure.

Surprisingly, despite its length, it has been surprisingly manageable, allowing me to park in commercial areas without much difficulty. In short, do not throw the stone at him. This Mercedes-Benz G-Class still has a place in the luxury SUV family.