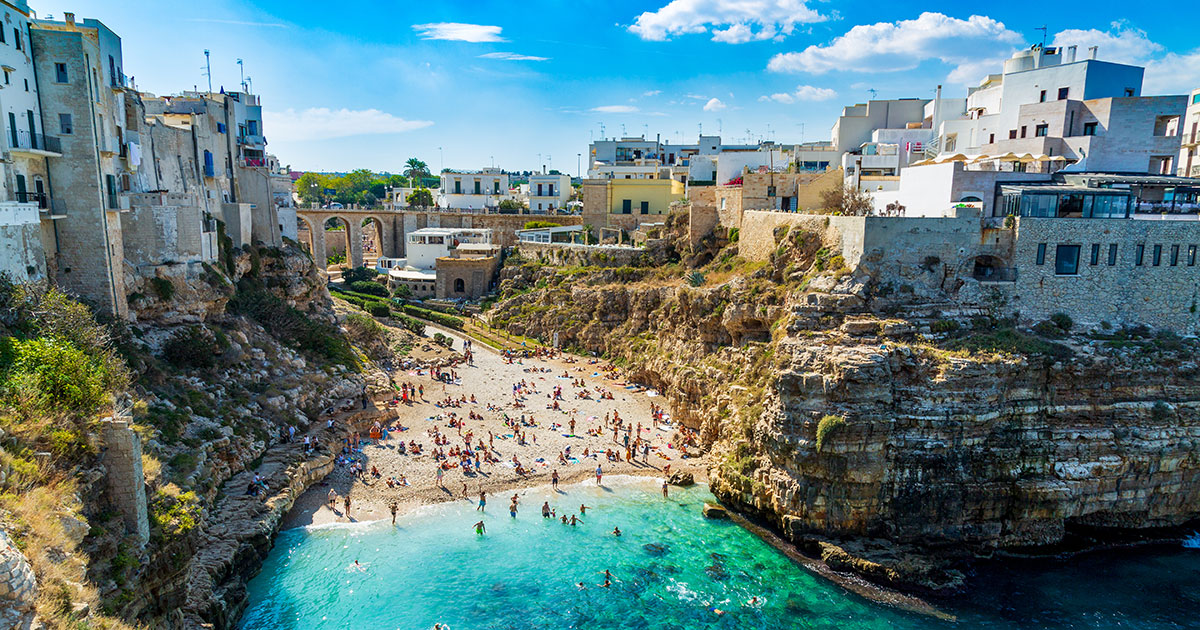 If you’ve seen the most recent James Bond movie, “No Time to Die,” you’ll notice that many of the scenes take place in Italy, specifically in Matera, in the Basilicata region. In this article, I’m talking about the neighbouring region of Puglia.

Adjacent to the Adriatic Sea, Puglia preserves the traces of many foreign dominations, while maintaining its personality. Between the fishermen’s nets and the remains of ancient looms, you will discover long stretches of sand, small pebbled coves with crystal clear waters, fascinating landscapes, and a Mediterranean cuisine of the highest quality with one of the greatest variety. It’s clear that everything the Italophile loves can be found here in abundance! Come along as I explore this magnificent region.

For Lovers of Food and Architecture

First, Puglia is synonymous with exceptional raw materials and products! In this region, flavours and ingredients coexist with the seasons. When you think of Puglia, you also think of orecchiette, taralli, friselle, bombette, puccia and tiella. Live the Apulian experience by tasting the burrata di Andria, the bread of Altamura or the capocollo di Martina Franca, a delicious dried meat!

Are you more of an explorer? Wander through the Trulli, the typical conical houses of the region, visit the Castel del Monte, an octagonal castle of the 13th century, admire the caves of Castellana or the cathedrals of Trani, Bari or Otranto and get lost in the narrow streets of Bari Vecchia or Monopoli.

Lecce and Its Baroque Period 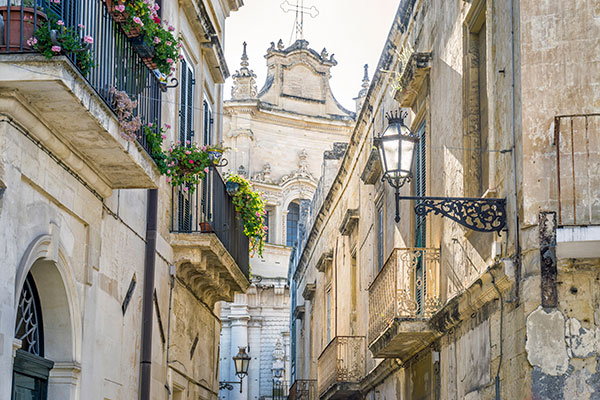 Let’s head to the Salento region in the southeast of Puglia, where Lecce is located. Considered as one of the capitals of baroque architecture, it is also called Barocco Leccese. The “stone of Lecce,” a very malleable local limestone, has allowed this city to build its own architectural style. Stroll through Lecce and discover its dead-end streets, traditional workshops, bakeries and restaurants where you can smell the tempting scents from surrounding terraces.

Polignano a Mare, Gateway to the Adriatic (on the cover)

It is impossible to travel in Puglia without adding the small town of Polignano a Mare to your list of things to see, even I make sure to stop there every time I visit! Jewel of the Valle d’Itria Coast, nested atop a cliff overlooking the turquoise waters of the Adriatic Sea, Polignano a Mare lives up to its name. Between the whitewashed streets, the beaches, the old town, and the beautiful old churches, this town has everything to ensure the perfect day! 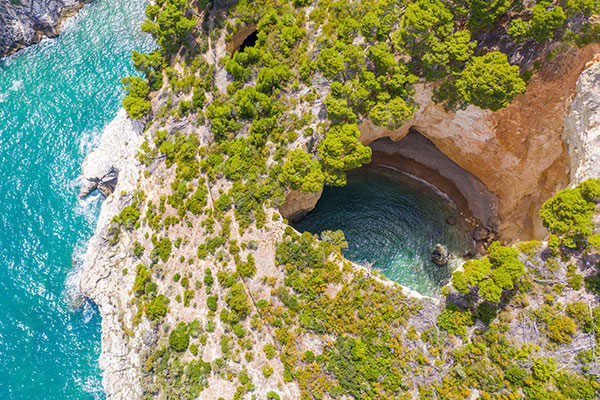 This natural region located in the province of Foggia owes its nickname to its spur-like mountain range. Stroll through the lush vegetation of the Gargano National Park, which includes the Umbra Forest (so called because it is shaded), the marine reserve of the Tremiti Islands and the three lakes of Lesina, Varano and Salso. This national park is the largest in Italy and contains a vast biodiversity in terms of its flora and fauna.

It is the perfect place to admire a rich vegetation in which a multitude of animal and bird species find refuge. It is not only one of the most popular seaside resorts in Puglia, but it is also the ideal place to taste the local cuisine, with masserias (large family-owned farms) and restaurants overlooking the blue sea. The latter reigns supreme, but there is no shortage of land. Here, farming and dairy production are an age-old art, where you can enjoy caciocavallo and tasty ricottas.

In 2001, while I was still a student, I founded the Favuzzi company, which is celebrating its 20th anniversary this year! As the son of Italian immigrants to Canada, you can imagine that before the company was officially founded in Montreal, it was built on hundreds of years of tradition in Puglia, Italy. 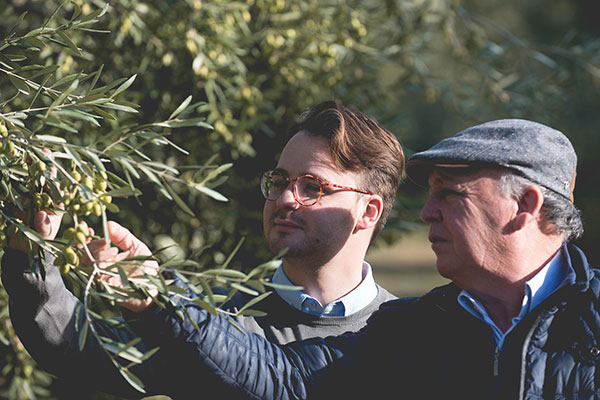 Favuzzi’s Robust Intensity Extra Virgin Olive Oil is produced in Andria, Puglia, Italy by Saverio Guglielmi. This family business has been producing a 100% Italian extra virgin olive oil of superior quality since 1954. Today, the two sons of the founder have taken over the reins of the mill with grandson Saverio Guglielmi. The estate occupies an area of over 170 meticulously cultivated hectares. The company’s philosophy is to combine ancient traditions with the real needs and expectations of consumers to offer a product that stands out for its unique properties and characteristic taste.

Combining experience and the most advanced technology, the extraction process guarantees a high quality product by monitoring and controlling each stage within 12 hours of harvesting the native Apulian olives. The resulting product is an Italian extra-virgin olive oil with incomparable chemical-organoleptic properties. In fact, the company has been recognized in the Flos Olei guide and was the recipient of the 2017 NYIOCC Silver Award. 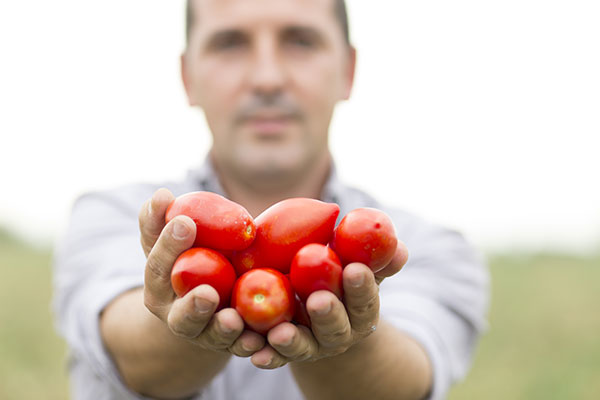 Our delicious tomatoes are grown in the “Tavoliere delle Puglie”, an important plain in Italy surrounding the town of San Severo in northern Puglia. The group of farming families behind our products grow and can the tomatoes themselves. The tomatoes are picked at their ripest and processed in less than two hours! This is the shortest agricultural chain in Italy, which is a testament to the incomparable freshness of these products. Our producers are above all farmers for whom cultivating the land is an art that requires great attention to detail.

I leave you with this succulent recipe from the Puglia region by chef Margherita Romagnoli: a delicious potato and cherry tomatoes focaccia.

Enjoy your discoveries and visit us at FavuzziFavuzzi

For generations, the Favuzzi family has lived according to the rhythm of the harvests near the Adriatic coast, in Italy. Michel Favuzzi, the founder of Famiglia Favuzzi, discovered the family's olive growing tradition through his uncle Damiano during a trip to Europe. It is worth noting that food is part of every conversation with the Favuzzis. Each family member is deeply attached to the land, passionate about doing things well, and focused on quality over high yield. Damiano is both a chef and an agricultural producer; it was he who encouraged his nephew to import an extra virgin olive oil bearing a protected designation of origin (PDO). This oil, produced by the oil cooperative most Favuzzi family members belong to, marked the beginning of the adventure.

Wines of Sicily: Dream Land for an Epic Winemaking Tradition