On 7 September, I had the honor to be invited at Gallery Gora to discover the wines of the 2014 draft Artisti Per Frescobaldi, a philanthorpy program of the famous Italian wine family Frescobaldi. This program puts forward the talent of three emerging artists by immortalizing their works on wines in limited edition.

The Artisti Per Frescobaldi initiative was born in 2013, an idea of the artistic director of the company and direct descendant of the family, Tiziana Frescobaldi, who was also on hand to give us a beautiful testimony to the success of the project since its inception. This now annual art competition is organized by the critic Ludovico Pratesi, which as I mentioned above, put forward three contemporary artists (one Italian) by creating a work whose inspiration is one of vineyards of the house.

The 2014 edition of Artisti Per Frescobaldi took place in Berlin and saw 3 talented artists:  Jorinde Voigt and Michael Sailstorfer of Germany and Yuri Ancarini of Italy battled to win the prestigious contemporary art award. To draw for the realization of their work, the three artists have been invited to the Castello area of Nipozzano, place of production of Nipozzano Reserva, in the Chianti Rufina region in Tuscany. Thereafter, artists saw their work publicly exposed in order to be judged by the panel of judges that included Leitizia Ragaglia, Director MUSEION of Modern and Contempory Art of Bolzano in Italy, Angelika Nollert, director of the Neues Museum in Nuremberg in Germany Dirk Luckow, director of Deichtorhallen Hamburg also GMBH in Germany.

JORINDE VOIGT
A Difference that Makes a
Difference (7)

It is the city of Berlin, which hosted the 2014 and artistic director Tiziana Frescobaldi project explains why: “For the second edition of the award, we wanted to target Germany, specifically Berlin, a vibrant city , attentive to the talent of the young generation of artists, an ideal city to host the edition 2014. ”

The wine of Artisti Per Frescobaldi: Montesodi Vendemmia Dedicata 2011 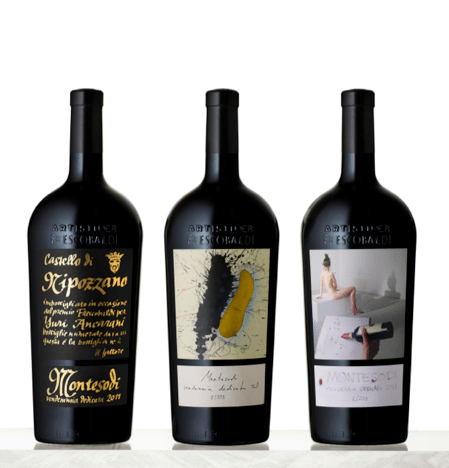 The wines created 999 magnums (or 333 per label produced from each piece) of a special vintage of Montesodi Vendemmia Dedicata  2011 specifically dedicated to the project. It should be noted that some of the profits from the sale of these bottles is dedicated to contemporary art.

Under the Toscana IGT appellation these 3 magnums sold in sets ($ 800 privately imported via Philippe Dandurand) are made from 100% Sangiovese. This is the Montesodi, the select believed since the first 1974 vintage, which is present in the bottle. It is produced with Sangiovese vineyard of Montesodi, perched 400 meters above sea level and considered the best vineyards of the property for growing it. The result is a rich and intense wine with remarkable aromas. This is a small plot of vineyard Montesodi that was selected for Artisti Per Frescobaldi whose main attraction its thin soils that produce a wine with a special structure and a particular elegance.

In August 2011, two extreme weather events have occurred and have had some impact on the final product. The first half of the month was marked by days filled with sunshine, but with temperatures not exceeding 30 degrees during the day, mixed with very cold nights. While the second part was, in turn, punctuated by intense sunshine which helped give power and concentration to the grapes. The end result was extremely mature red grapes, healthy, focused and rich in polyphenols.

With this temperature, the wine results as an intense ruby red color. On the nose we find flavors of violets and fruits, the scent of blackberry is particularly present. Thereafter, it is a coffee smell that follows, mixed with spices like nutmeg, black pepper and licorice. It is a wine that is very fresh, with a dense texture and subtle, but also very bright. The body is so generous. We also have the right to a particularly long finish dominated by fresh notes and a very present fruit. A powerful and elegant wine. 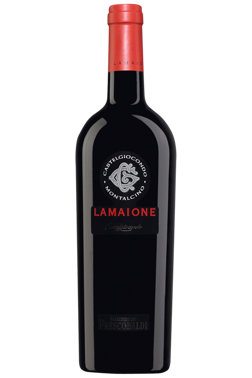 To support the Montesodi Dedicata Vendemmia 2011 during the evening but not present in the project Artisti Per Frescobaldi, two other wines are grafted to the evening. Let’s start with Castelgiocondo Lamaione 2011 great Merlot wine, planted only since 1991 on Castelgiocondo estate in Montalcino. The effects of August were different on that region in 2011 than on Pelago, located in the suburbs of Florence while we are in Siena, just over the west coast of Tuscany.

As for the tasting, we are more in a lively and deep red for the wine, the nose rather, they are aromas of blueberries and blackberries, but without excessive sweetness. dark chocolate notes are identified there, licorice and coffee, followed by perfumes and balsamic and spicy approaching the thyme, and mint pepper, one feels almost at Christmas with these perfumes. In the final, it’s more tobacco and almond that we mark. In the mouth, it is rather perfect and well done, with a few well placed tannins and flavor inspired perfumes. a retail price of $ 75.00 SAQ but does not seem available at the LCBO at the moment. 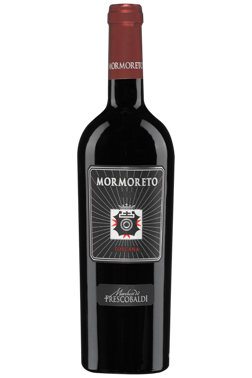 Now to the last wine tasted, Castello di Nipozzano Mormoreto 2012 an exceptional assembly but still classic Cabernet Sauvignon, Cabernet Franc and Merlot with a small percentage of Petit Verdot. By cons, this is a wine that has been produced only 7 times since its creation in 1976. A very fine wine with enormous potential for keeps.

This wine has suffered some of the same effects as the temperature Montesodi Vendemmia Dedicata 2011 being in very close to the latter region. It includes a rich and complex nose with wild berries to point, with raspberry and blackberry and a presence cocoa, roasted espresso bean, subtle notes of vanilla and cinnamon and herbs like tea, all accompanying its well defined ruby color. In the mouth it very round and smooth, with aromas of the nose are also present on the palate, but where cocoa chocolate is more present with raspberry and tobacco. It retails at a price of $ 65.00 in SAQ, this wine doesn’t seem to be at the LCBO as well .

The evening was very interesting learning perspective, especially in the philanthropy projects made by the Frescobaldi family. We only have to think about Gorgona project (link coming soon)to find family gives back to society.

Getaway to Bordeaux and Languedoc-Roussillon with this trio!