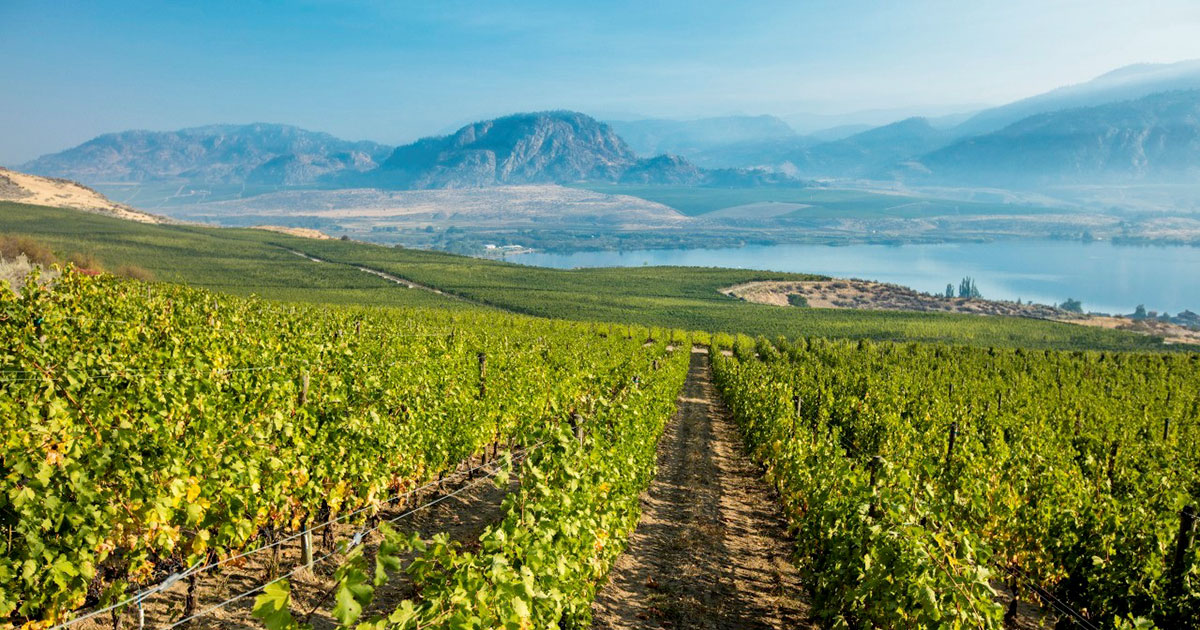 More than 20 years ago, Osoyoos Larose settled in the Okanagan Valley of British Columbia to create a project that might initially seem inconceivable—to create an excellent Canadian wine. However, it is a successful bet, since many gentlemen appreciate the products of this area. Let’s learn a little more about its history in the company of Caroline Schaller, Managing Director and Winemaker, of the estate that has pushed Canadian wine to rise above the mountains. 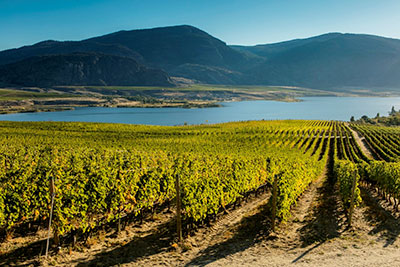 “The origin of Osoyoos Larose dates back to 1998. The Taillan Group, prestigious owner of Bordeaux and Vincor Châteaux (now Arterra wines in Canada), which had the idea of ​​creating a vineyard facing Lake Osoyoos, at the start of vineyard development in Western Canada,” Ms. Schaller told me. The association led to the foundation of a qualitative territory because it was the production of grapes that could not be used for making wine. Besides, the government of British Columbia has also called for tenders to develop wine grapes.

“It was the avowed goal of making wine in the Okanagan Valley, as the great Bordeaux wines, and of creating that of the Okanagan,” said Schaller at the outset. After many field studies, the people of Osoyoos Larose decided to settle where they are now. Indeed, the latter is the hottest point in Canada and the most favourable for planting the various Bordeaux grape varieties that make up the estate’s wines.

“In 2001, the first vintage was released. I make a big leap until 2013 when it is the separation between the two partners. The French group now owns 100% of Osoyoos Larose. Since then, we have always had two products, Pétales d’Osoyoos and Le Grand Vin, and the latter is the estate’s grand cru product,” To explain the winegrower to us. Following these remarks, I jumped on the subject to validate a specific reflection that runs through my head, namely asking whether we are mainly targeting gentlemen when offering Bordeaux-type Grands Crus.

Near of the Great Bordeaux 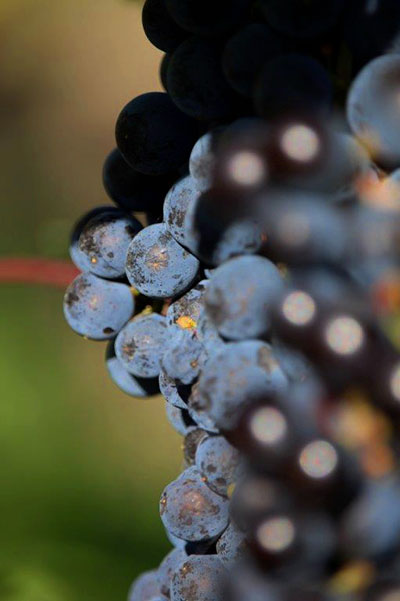 “It is a wine that has been made in the image of the great wines of Bordeaux. In general, these are beefier and more powerful wines that often appeal to a male audience. We also have a clientele of collectors, amateurs and connoisseurs of great wines. As a result, we are far from an audience that likes light wines. Added Ms. Schaller. One can also wonder about developing the two Osoyoos Larose products, which came first, for example, and the winegrower told me that it all started with Le Grand Vin. This was quickly followed by Pétales, thanks to the establishment of young vines. It is one of the estate’s peculiarities, occupying a total of 80 acres in one piece, to be located on the same land, and that each plot is maximized for optimal classification.

“Pétales is a lighter wine, but it is still made from five Bordeaux-type grape varieties. With its ageing in barrels, it is perfect for an entry into a blended wine,” Underlines Ms. Schaller. As for the second, you can imagine that they are not necessarily the same vines. “For Le Grand Vin, we use the more concentrated vines. We play on maturity, and it is aged, like Pétales, in French oak barrels, but for this one, they are either new or one year old, while for Pétales, they are between 3 and 4 years old. For our flagship product, we don’t want that to define the taste very much; however, we want the concentration of the fruit to absorb the power of the barrel for a nice correlation between the two,” she adds.

For now, Osoyoos Larose only produces two wines. However, Ms. Schaller told me that for the first time, in 2020, the production team made sure to plant a plot of white grape varieties. This wine is made up of Sauvignon Blanc, Sémillon and Muscadel (they will be among the first in Canada to do so), which you can discover in 2024 if all goes well. “We have this desire to offer a white in order to fill our range well,” Ms. Schaller told us.

The Impact of Climate Change 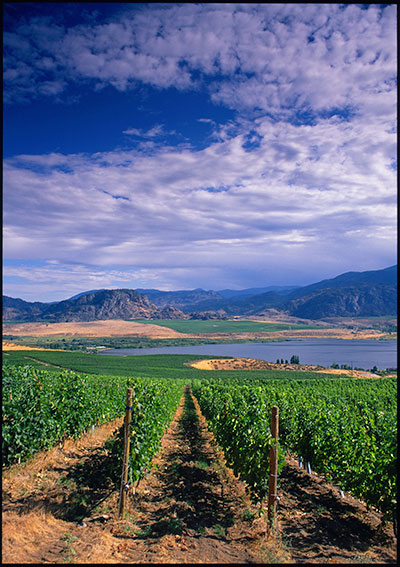 California’s summer 2020 wildfires had a pretty significant impact on the wine world. This impact was felt even in Washington and Oregon, British Columbia neighbours, so I was curious to know if these touched the British Columbian domain. “In normal times, with climate change, we have a problem as we reach the limits of the two points of the vine, hot and cold, we play on both extremes. We know we can have losses in the winter with what we call black frosts, where temperatures can be around -20 degrees, and in the summer, we can have days above 40 degrees. We are located in a nearby desert where there is almost no water. The situation becomes so serious that at such a hot temperature, the vine goes into survival mode and blocks the flow of water to the grapes in order to stay alive,” explains Ms. Schaller. She reassures us that even though the fires have runs near the valley, the 2020 Osoyoos Larose wines will not have a smoky taste like those of our neighbours to the south.

The advantage they have over France or Europe is the low presence of diseases in the vines. The harvest at Osoyoos Larose ended in early November. The harvest which has just been done was, like the other years, exceptional, since, according to what Mrs. Schaller told me, the company does not have bad years. The cooler years are the ones Ms. Schaller prefers, as they allow the wine to keep its fruity and fresh side, and therefore less jammy and prune notes found in warmer, drier years.

The Tasting of Osoyoos Larose wines 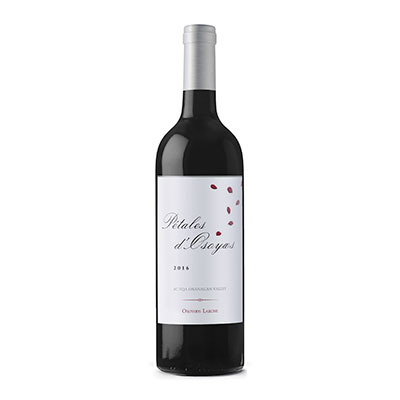 Now let’s jump to the tasting. How should we taste them, and, above all, with what? “Let’s start with Pétales, which is an excellent introduction to Bordeaux blended wines, as I said earlier, without being too strong. It can be drunk in summer, among other things, around the BBQ, Mediterranean dishes, a pizza or moussaka; it is quite versatile. For Le Grand Vin, a nice piece of beef, a turkey, Rossini tournedos (a mixture of beef and foie gras), with little beefy cheeses. For chocolate lovers, it will be a perfect addition to desserts with a high concentration of cocoa. I participated in a vertical tasting during a visit to Montreal at Atelier Joël Robuchon a few years ago, and the chef made us a daring wine pairing. It was a roasted cod fillet with a coffee crust, served with Le Grand Vin millésime 2009. It has smoother and more mellow tannins accompanied by aromatic notes leaving on the tobacco, like a mature Bordeaux wine. The match was perfect; it is part of my great tasting memories, “advises Ms. Schaller. 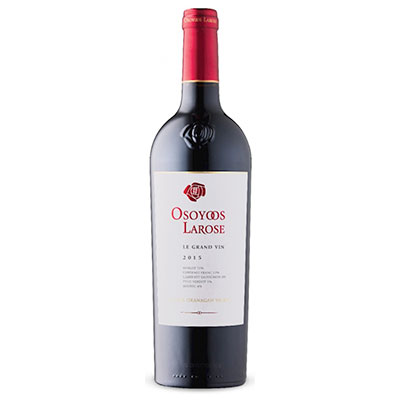 With Le Grand Vin millésime 2009 in mind, I allowed myself to ask him what to pay attention to when it comes to an old vintage. “You have to be careful with ageing because old wines are very different from recent vintages, so you have to know if you like this type of product. The Grand Vin of the last ten years retains its tannic structure and its fruit. Beyond this age, the notes will be more focused on tobacco, chocolate, dead leaves and even the leather side. We have to pay special attention to the chords in order to have a perfect balance. In pure tasting, with a cigar, in your leather club chair, with a beautiful piece of jazz or classical music, to rest, it will be a perfect moment which will allow you to appreciate the wine for itself,” from us suggest Mrs. Schaller.

As 2020 is somewhat the year of local consumption, we can see Osoyoos Larose wines as a great option to put on our table. Dual nationality, French and Canadian, as Ms. Schaller mentioned, is an advantage for them. By representing Gruaud Larose, the company benefits from its rich history, as this great house produces exceptional wines from an extraordinary region where exceptional reds are created.

Is it better to give or keep Osoyoos Larose wines? “It’s better to taste it!” Concludes, Ms. Schaller.

Canadian wines lovers? Visit our section on the Niagara wineries or this other winery of the region, The Mission Hill Family Estates

Thanks to Charton-Hobbs for the opportunity of this interview. This article was published in the Gentologie Magazine Issue 6

A selection of great reds to warm up the January evenings!

A trio of great reds for the Holidays!