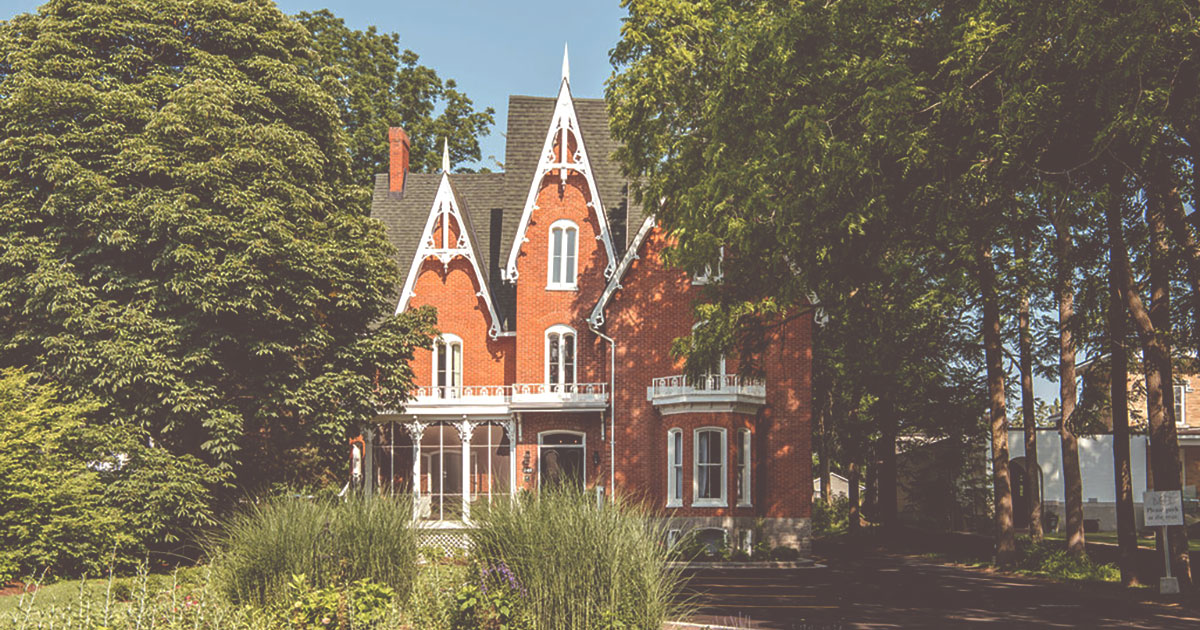 To continue this trip in the Prince Edward County in Ontario, I must speak to you about where I stay, thanks to Cadillac Canada, the Merrill House. A little castle built in 1878 by George Merrill, the first magistrate of the County, is now a luxury boutique hotel where many memories are made. Learn more in our interview with the owner, Jordan Martin de Rosales.

Merrill House: A Castle In The Prince Edward County 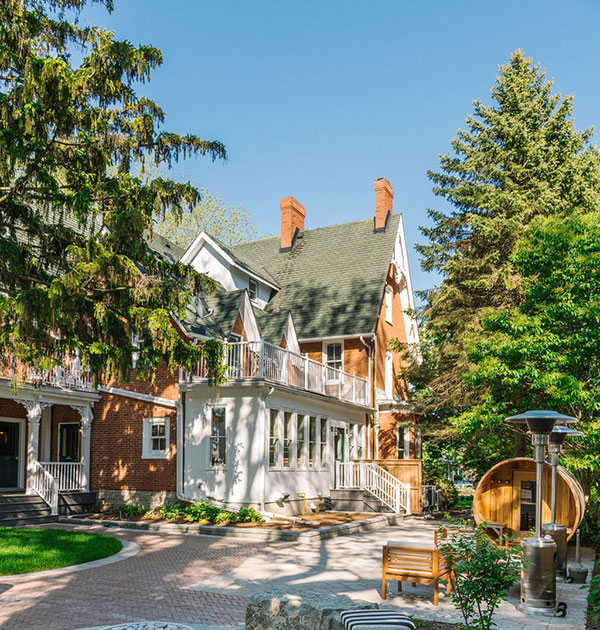 You may wonder how a project like this starts. Well, there’s an interesting story behind it. “It was an ambition for a long time. I was always really passionate about the hotel industry and getting into the hospitality business for most of my life, and as my education developed, I became more interested, especially in the luxury segment. So I moved to London (UK) from Hastings County to do my master’s in luxury brand management. After getting my diploma, I worked for many renowned global photographers. Then the hospitality life got me. I worked for the Grange Hotel Group in London and the Jumeirah group in Dubai. And ultimately started my brand management agency,” relate Mr. Martin de Rosales.

You may wonder how it came to the Merrill House that we have today? During that time in London, Mr. Martin de Rosales gets more and more interested in having his hotel. Then, one day, at his London home, during Easter as he was working on a project, a revelation came: “This isn’t my passion. This isn’t what I want to be doing ultimately. And the same week I went to view a little castle in the north of England that had been converted into 13 rooms and suite” adding the Merrill House owner. 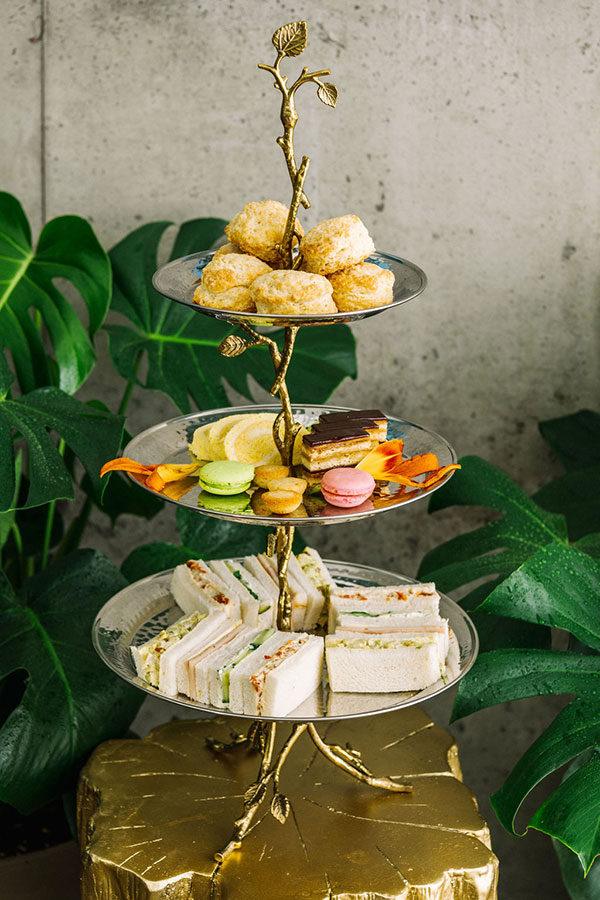 It didn’t happen overnight, as you may wonder. The original idea was that Mr. Martin de Rosales stayed in London, and have a property in the English countryside. But, as a wine lover, he also wanted something in a winery region, so he thought then maybe he could have something in Burgundy and have a place in Paris. Then, he came back to Canada for Christmas. That was three years ago. While at his parents for the holidays, he heard about everything that was happening in Prince Edward County, how it was emerging as a wine region, how quickly it was growing. Subsequently, he found what was called Merrill Inn, at the time, online. He had to go back to London, but then his parents went to view the property then, it was the young entrepreneur time. So he flew back, and the rest is history. 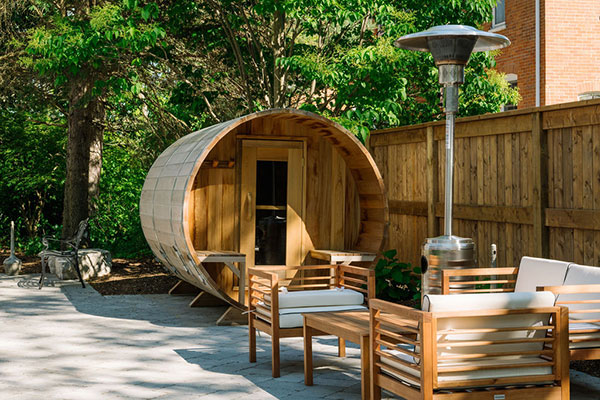 The first year was in the summer of 2018. “The hotel was fully booked for the summer. So we ran it through the first season as it was before. It was like a country Inn concept that we renovated last year to launch in summer 2019. So it’s not even a year yet. Which makes sort of the journey,” told the hotelier. 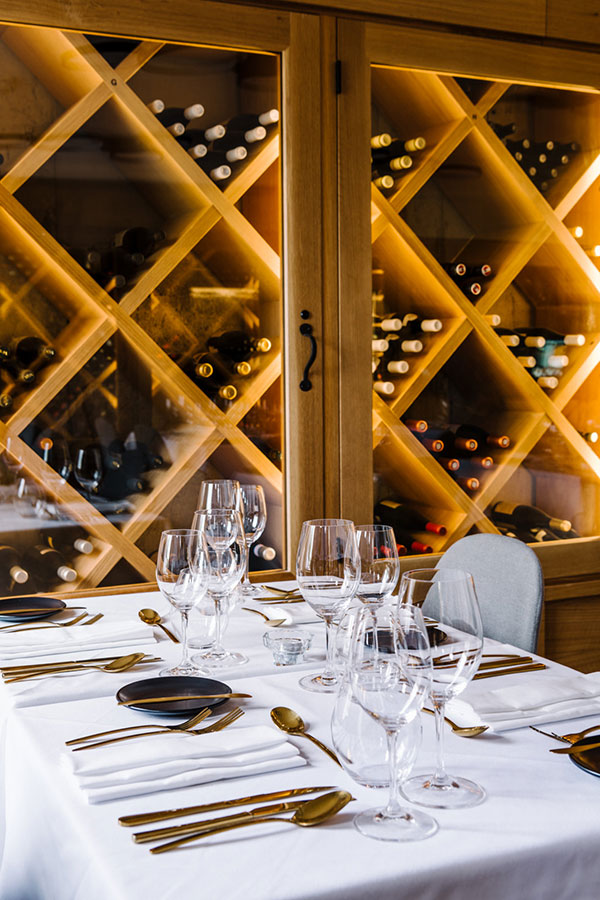 The priority was to build the restaurant, so he hired a full-time wine director to start building up the cellar within the first week. And since then, they have won two Wine Spectator awards (with a third in 2021). They’re the only Wine Spectator Awards winner between Toronto and Ottawa, and as there is only one in the country’s capital, making just two between Toronto and Montréal. “The wine program was vital to me. There are many local Prince Edward County wineries and then our full Old World wine list as well. We have nearly 300 wines now. The three main segments are first the hotel, but then the cellar, and then the food,” added Mr. Martin. 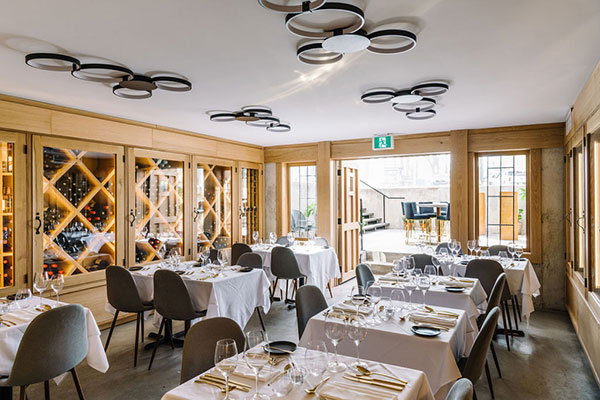 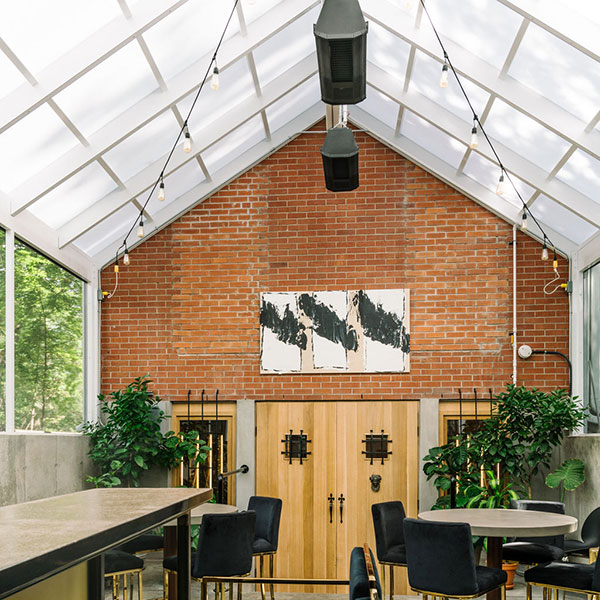 “We have a champagne list of about ten products with Bollinger, Dom Perignon, Cristal (de Roederer), Veuve Clicquot, Ruinart, etc. We also have our house champagne; it’s called Bernard Depoivre, which, I think, one other restaurant in Canada has, but it’s a great local connection. The gallerists at Maison Depoivre, which I’m buying my local art through, are from France, one of them is from Burgundy, and the other is from Champagne. The family of the latter has a Champagne house, Bernard Depoivre. So it’s like a local Real Champagne, which is an exciting connection.” 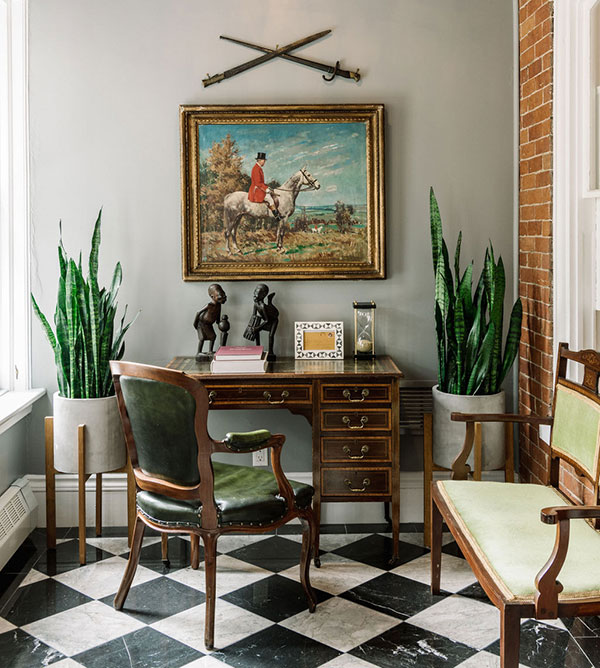 I ask Mr. Martin de Rosales how his influence transcends in the Merrill House; the first thing he said: “Often in North America with a house like this, the people took one or two approaches. It’s either creates a pastiche of the past, where everything should be kept with the period, or entirely modern. I mean, this space is entirely modern. For me, it was about to do the same as European country houses, where they organically grow generation after generation and new pieces are added to the collection contemporary to the time. But in keeping with the style that has and respecting the heritage and modernizing it and that. Pieces from all over the world and all different periods can live together in aesthetic harmony. They don’t need to be 18th-century French pieces or something that resembles that” precise the Merrill House owner. 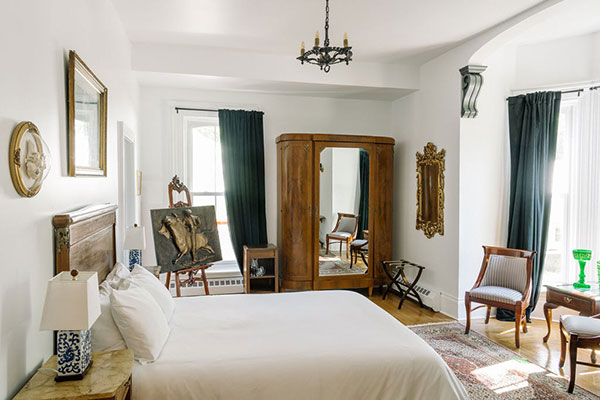 As for the decoration, the Ontario-born hotelier told me he shipped many of his owned paintings from England, objects of art and select furniture. In that year of renovation, he started to buy a lot of furniture, which gave him a chance to plan the renovations. 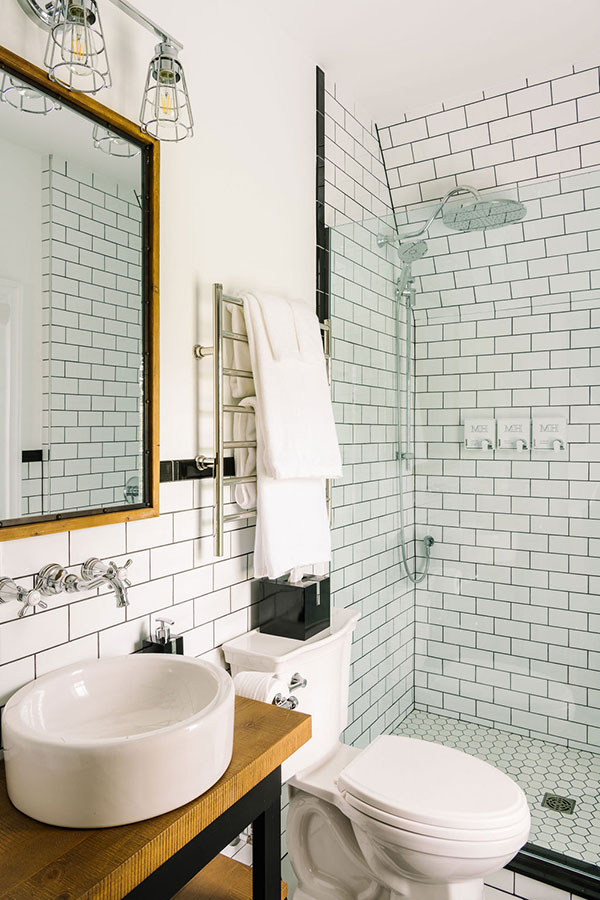 New Property on the Way

As you may know, we, entrepreneurs, always have many projects. It’s also the case of Mr. Martin. He’s focusing on a new property in Prince Edward County, about 20 minutes from the Merrill House, where they will plant a vineyard, and they additionally have a mature orchard there, so maybe a cider will come. They will also have a kitchen garden where they will be growing their products for the restaurants. There’s going to have a private beach club for the Merrill House guests in the years to come. With a pool, a bar and a lunch restaurant, which will also provide for private picnics. They delay the second property for 2021, but we had a glimpse of Mr. Martin de Rosales words. “It will be very modern with a glass structure where you can see outside, an ambiance that resembles what’s down here in the conservatory. There is no historic built house to fix; all of the estate has a fascinating heritage. And there are about five acres of Parkland that was planted in the early seventies”. 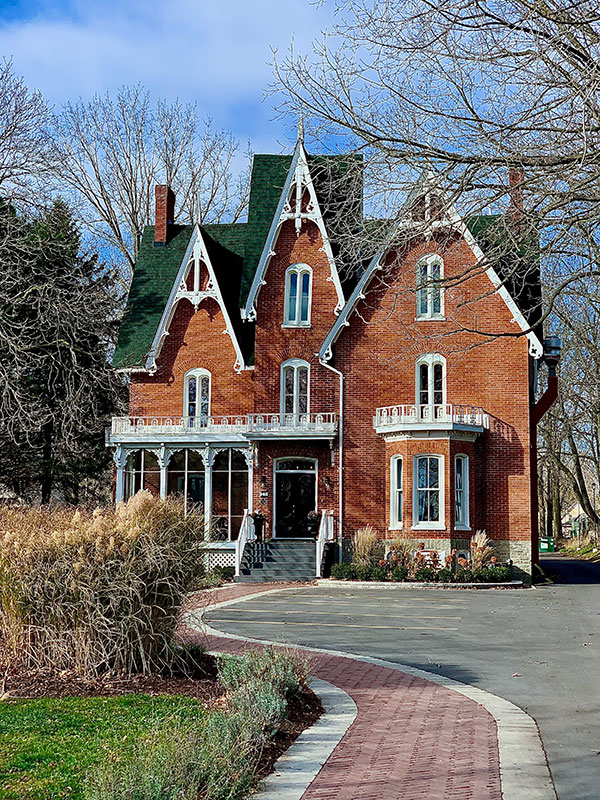 I then ask Mr. Martin what he likes the most of the hotelier life. He replies by saying that it brings together so many passions: The wine side of the cellar, the food with the restaurant, he loved the design side of improving the hotel and meeting so many interesting people that come through Merrill House. “Fifty guests can come through here every day and, of course, I don’t get to speak with everyone, but it’s special when people are interested in a tour or in learning more about the house, then it’s nice to connect with them. And often, we share some background and some interests,” concludes Mr. Martin.

The last sentence to resume the passion of Mr. Martin de Rosales and the community “It’s a wonderful thing about Prince Edward County is that so many instrumental, entrepreneurial people out here trying to make their dreams happen”.

Reserve your trip at the Merrill House now

Contribute to the crowdfunding campaign for our Print Magazine