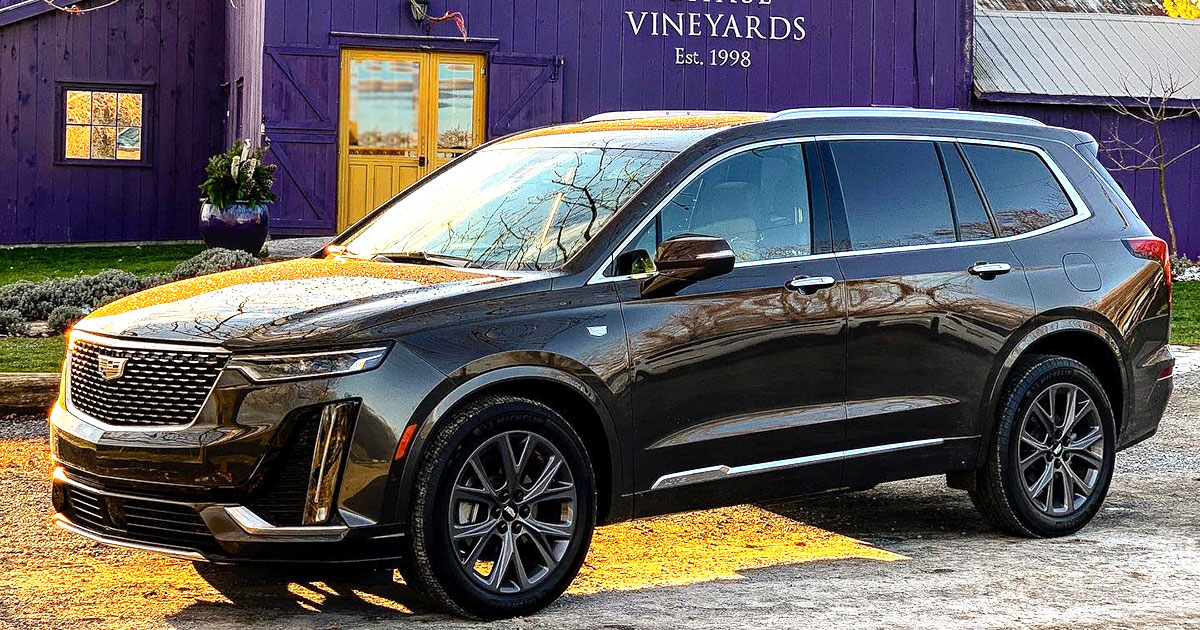 In the month of November 2020, I had the chance to do an itinerary, for the first time, accross the Prince Edward County (PEC) in Ontario, at the invitation of Cadillac.I had the opportunity to live a rather exciting and, at the same time, strange road experience since the trip, in these new conditions, was memorable. My last outing outside the province of Quebec was in September 2019, also in Ontario, but this time in Niagara, for the unveiling of the Porsche Taycan. Follow me on board of the Cadillac XT6. 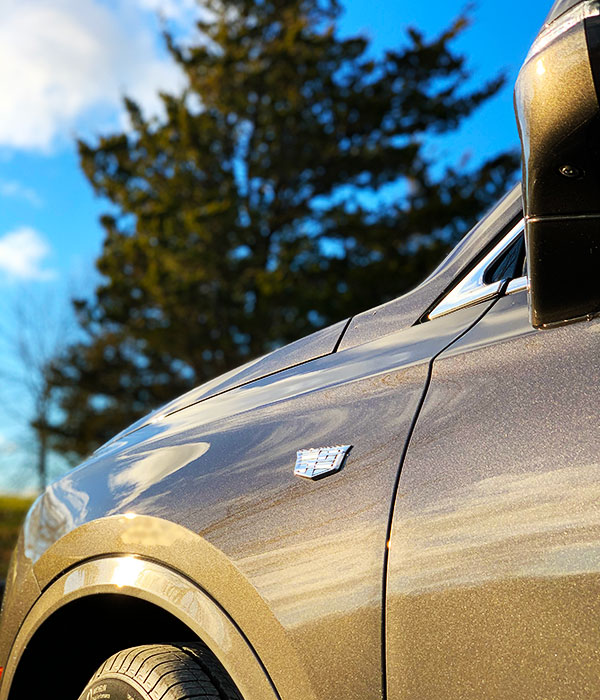 quite different from the recent SUVs I’ve been able to drive. You can compare the XT6 to its American competitors, such as the Lincoln range; the European models, in the majority, are much smaller and lighter. But on the power side, you are going to find it. Even with a heavier vehicle, the pedal quickly hits the floor. Especially during the various overtaking, you can do on the 40 or 401, as I have experienced.

One aspect that the XT6 doesn’t take lightly is comfort. The seats are enormous as you think you’re at the helm of a boat, with all the controls, whether you’re talking about Android Auto or Apple CarPlay. However, some charging and audio functions may come as an option depending on the model, which is a bit annoying for a vehicle over $80,000 tax included, considering that the competition offers some of these basic options.

But as I told you above, the road condition was superb, and what about ON Route, these convenient rest areas are everywhere. And when you’re on the road, you want to see. One feature I liked about the XT6, especially since it’s a massive vehicle (it can accommodate up to seven passengers), is the rearview camera. Indeed, the rearview mirror is a projection of the camera located at the rear of the vehicle, very practical since the sun is never in your viewing angle. Nothing is blocking it like the rear passengers or your luggage; therefore, safety is a plus.

The temperature in the direction of Ontario was not the easiest; in addition to having to get used to the size of the vehicle, there was a mixture of snow and rain, which was not very pleasant, considering that the vehicle had summer tires. But, despite my fears, I was having all kinds of scenarios, each more incredible than the next, everything went well, and the vehicle didn’t move thanks to its exceptional handling. 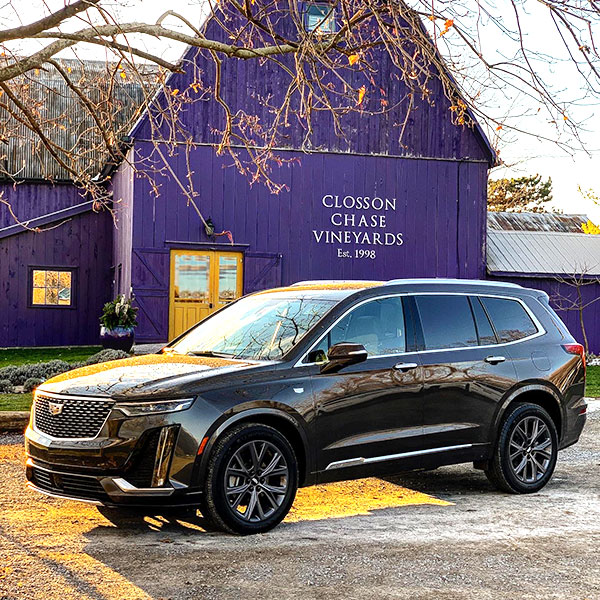 After almost 4 hours, my first stop is at the Closson Chase vineyard, a magnificent place, with the first snow falling on its vines and its purple barn. I tasted four wines there, don’t worry, the total for the tasting was not even a glass in total. Besides, if you ignored it as I did, Prince Edward County (or Prince Edward County) is grand! It’s not doable by foot, perhaps by bike, but certainly not in November, and expect roads that are not always in their best condition. There are often gravel side roads, not always as perfect as those in Niagara. 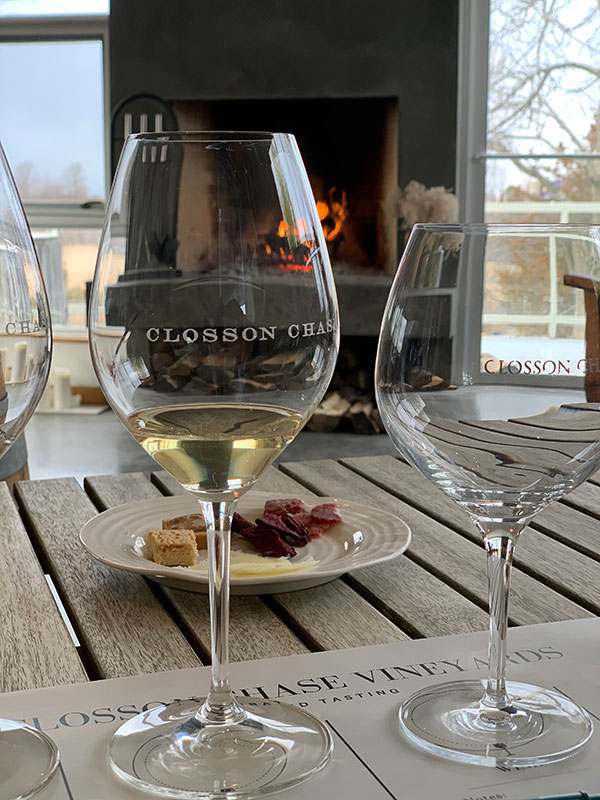 After some wine shopping at the store, I made my way quietly to where I will be staying, almost a 30-minute drive, Merrill House, the period residence of a former judge. The latter also houses a restaurant, the penultimate restaurant where I had the chance to eat before closing. Learn more about the hotel in the article following this one.

A training before rest

After nearly five hours on the road, I was delighted to put my things at the hotel, of which I was one of the only customers. It also closed the following week, only to reopen in the month of May. But when you have your own business, driving for such long hours means having to work, so I made up for lost time reading emails and making various customer calls, not to mention showering before dinner. But before going to the restaurant, I had an activity planned with Cadillac to learn more about the vehicle.

I have already spoken about the Cadillac Live platform, offered in French and English, but I had not tested it, just as an example. I have to say that it is very effective and you can ask whatever you want from the advisor, who is not there to make a sale, but to answer your questions. Whether it’s how to adjust the heating properly or how the wipers work, it will have an answer for everything, in video and live. You even can make an appointment. Those who doubt safety note that the latter does not see you; it just hears your voice. Several vehicles are present, including the most recent. If one of the models interests you, you can then schedule an appointment at the dealership to test-drive the vehicle and complete the transaction.

A majestic dinner at Merrill House 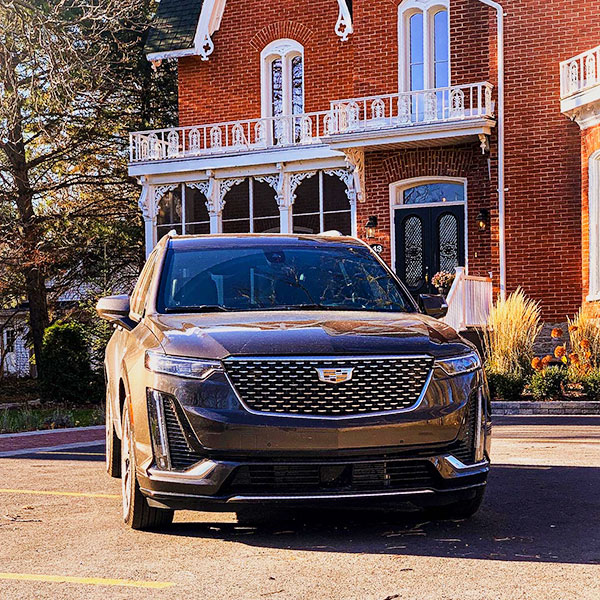 This day me hungry, and it was time for the exquisite food of the restaurant at Merrill House, the only Wine Spectator Award holder between Toronto and Ottawa. The freshness of the dishes, the service, everything was exceptional. The only little addict was the lack of wine by the glass from the Prince Edward County area. There were several from Niagara and even California, but not the ones in the immediate area, which I found rather odd. I shared this with the team, who rewarded me in offering regional wines at my doorstep.

Also, while I was there, the “Countylicious” event, a kind of MTL à Table, was taking place across the greater PEC region, which puts local producers ahead. The event is exciting considering Ontario’s agricultural powerhouse, which produces countless and delicious fruits and vegetables. 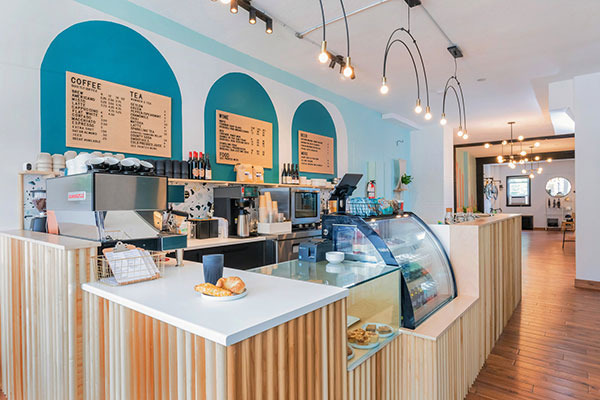 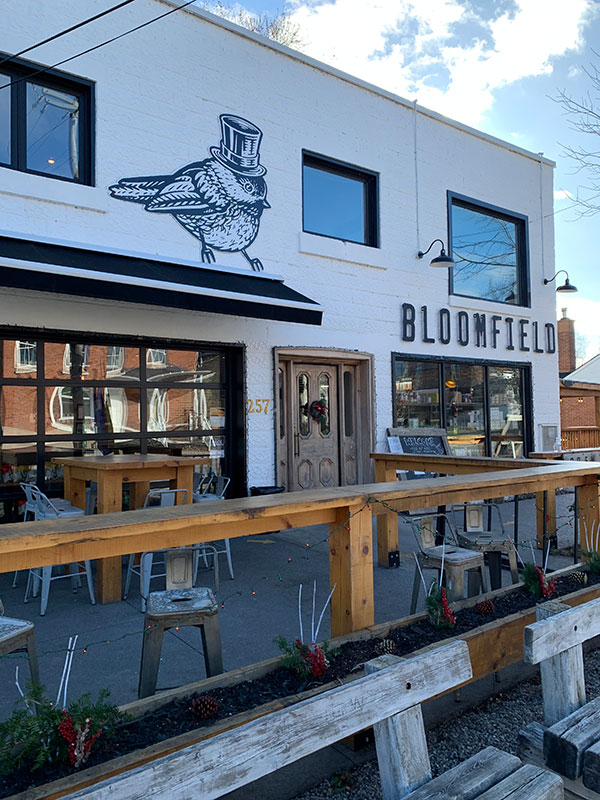 he next day, it was the turn of a delicious lunch at the Merrill House restaurant that I could rejuvenate. Subsequently, a stop at Beacon Bike O Brew was on my list. Probably one of the best cafes in the area. I took the opportunity to explore the town of Picton a bit on foot, it is charming, and there are several hotels under construction, with incredible charm. There are also several small shops, bookstores and more, a nice mix. For lunch, the Cadillac team suggested the Bloomfield, a kind of restaurant/delicatessen whose charm goes wonderfully with the region. While my friend Manon Lapierre, better known under the name of “La petite bette (in french)” I told you about in our Issue 7, had published a recipe for Muffaletta, funny coincidence, there was one on the menu, and it is what I took. It was excellent and huge. You can also find Quebec products such as Fromagerie de l’Isle products and many others. 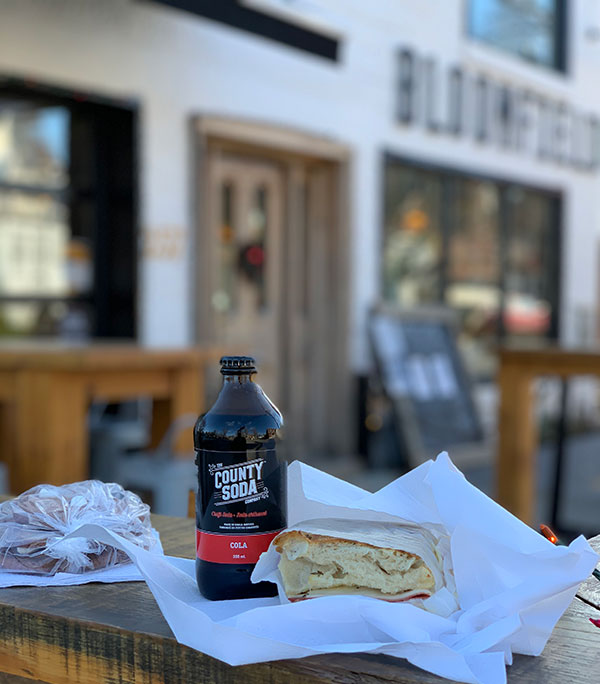 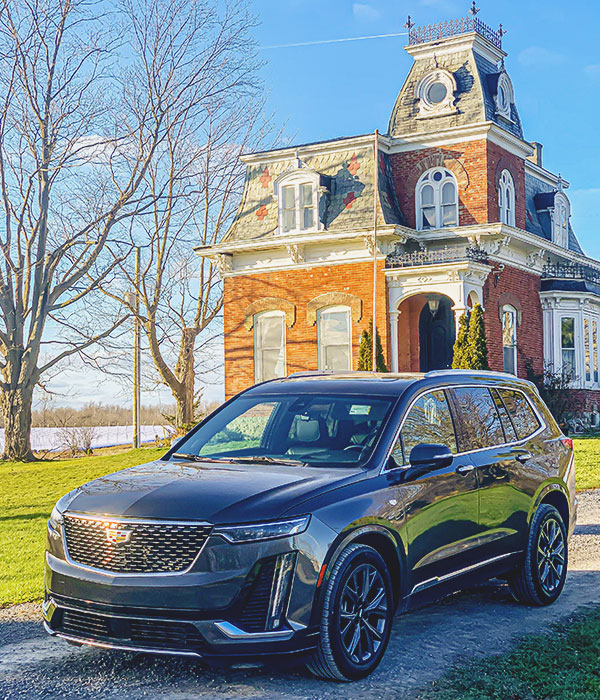 One appointment does not wait for the other when I have to go to the Kinsip distillery to taste their different products, again in reduced quantities since I drive. The explanations were obvious, and the products delicious. I brought back the maple syrup in whisky casks and the Whisky Cooper’s Revival. It was time to take some pictures in this enchanting place, and I continued my journey. I made a stop at Drake Devonshire, but without a reservation, I cannot enter, and the view of the parking lot and outside the building is not the best. It’s probably different when you’re indoors. I promise to go back.

I wanted to take a trip to Sandbanks, but it is a little less inviting in mid-November when the cold is present, and the place is like the desert. So I retraced my steps; it will be for another time.

An Ultra-Local Dinner at The Marans 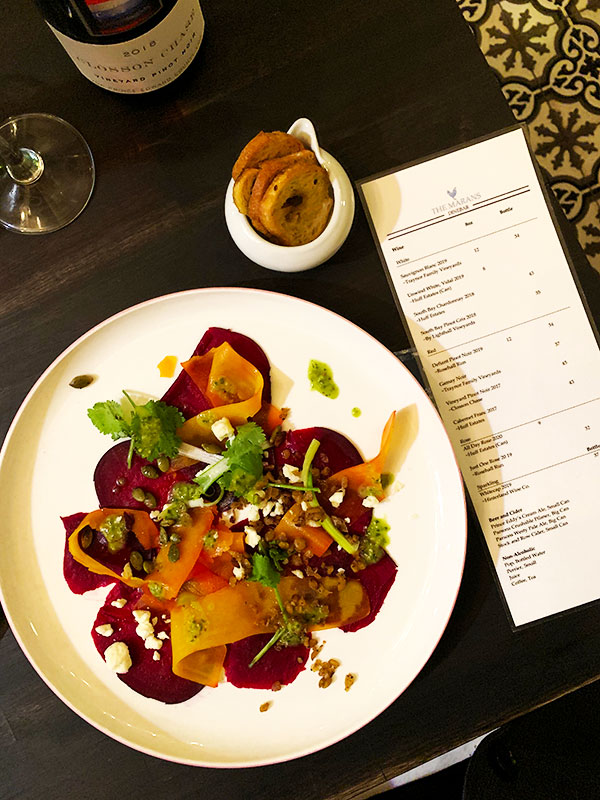 For my final evening of this two-day getaway, I headed to The Marans restaurant. From the start, we discover local wines, handmade products, and it is well designed. The restaurant will itch for the summer of 2021 in a new location. I took the Countylicious menu with some extras. I started with a magnificent bottle of Pinot Noir from Closson Chase (I should point out that I was on foot, the restaurant is less than 10 minutes from Merrill House), a vineyard visited the day before. Everything was delicious, starting with the soup, passing through the foie gras and pork board, to the beet and squash carpaccio with a piece of delicious Feta cheese. The miso pork was just perfect. Fondant and with magnificent seasonal vegetables. What more could you ask for? A smore’s pie that I devoured. A simple restaurant, but oh so delicious!

And I was fine on my second night at Merrill House. The next day, after another hearty lunch, it was a little interview with Jordan Martin de Rosales that will be online soon.

The road back to Montreal with the Cadillac XT6

It was on a beautiful sunny day that I had the chance to return to Montreal with the Cadillac XT6 and its heated steering wheel, a must with the temperature a little cold. In short, the vehicle features allowed me to have a pleasant trip, but with the 3.6-litre V6 engine, the power was there, which allowed me never to be worried about the capabilities of the vehicle. Note that a 2.0-litre turbo engine is available. And if you have a large family, its cargo capacity of 2,229 litres will go a long way for you on a long trip.