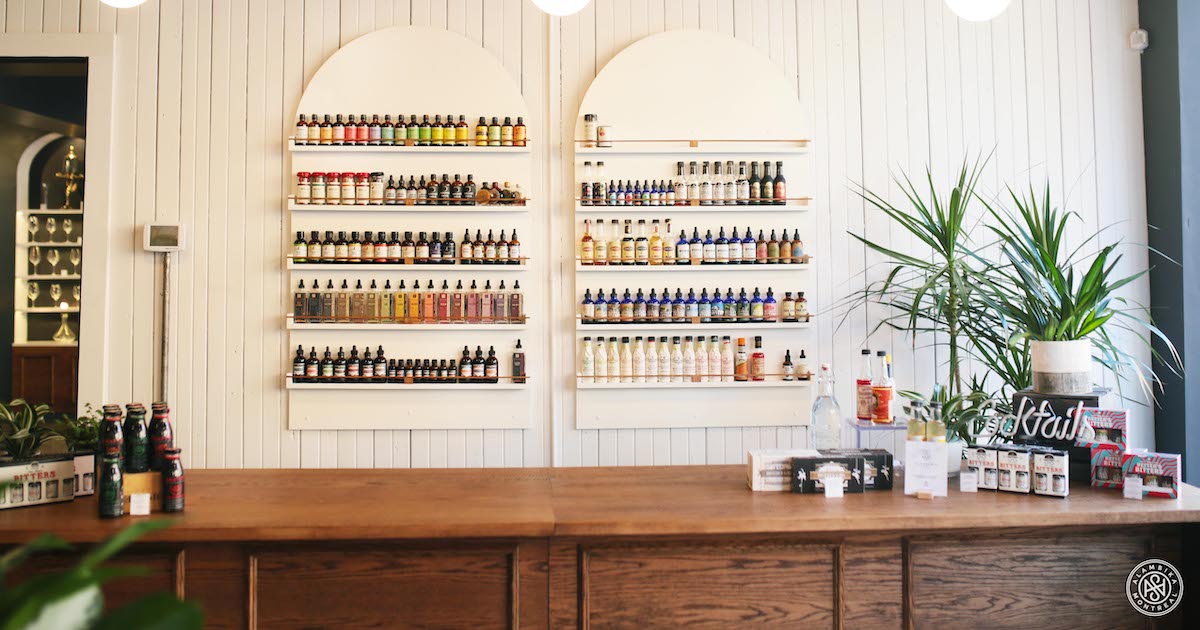 It was by a strange coincidence that I met Jean-Sébastien Michel, the CEO of Alambika, in fact, I knew him without really knowing him. Our first meeting was in Ottawa during a meal at Fauna after my 10 km at the Ottawa Marathon. He was with his wife, the journalist Ève Dumas. It is only about 2 years later that I replaced Jean-Sebastien during a discussion.

With Alambika’s new boutique on Saint-Laurent Boulevard and a growing list of distributors and partners of bars and restaurants, there is a good chance that you have enjoyed a cocktail in one of his glasses. Here is my interview with Jean-Sébastien Michel from Alambika.

So how long has the Alambika company been opened now?

The project starts in 2011, I sold by catalog from my living room. The website opened in the summer of 2012, the first shop on November 14, 2012, and the distribution component that followed for the establishments.

The idea comes from where, why Alambika?

Essentially, I have a background in Political Science and what interested me a lot was the prohibitions, because there were several, for different products and at different times. In Germany, in the 18th century, coffee was banned from the army because the coffee was black and it was associated with the enemy who was the Arab people at the time, and so on. Each company had its reasons for banning certain products, and accepting others. 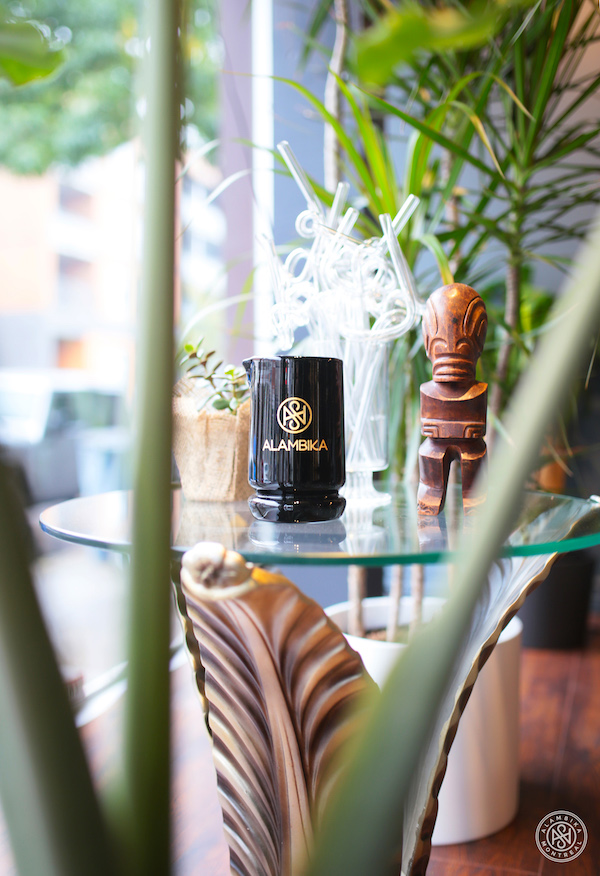 Everything for the Tiki lovers
Photo: Alambika

I was very interested in alcohol and the fact that absinthe was banned for socio-economic reasons, but I did not want to spend my life in theory, and I noticed that there was very little, at the time, almost 10 years ago, offers for beer and spirits lovers, unlike wine lovers. So, to make a shop where 18-45-year-olds would feel in their place, for alcohol lovers other than wine, but not forgetting the latter. I wanted all products to have a dose of equal love in my shop. Absinthe being my hobby, we were the first in Quebec, and in Canada to really focus on Absinthe. From the beginning of the artisanal distilleries, we worked with them, and it got bigger. In 2012, I was alone, in 2013 we were 3, and we are almost twenty in the business now.

The Alambika boutique on St-Laurent

And the shop on St-Laurent is very central

Yes exactly, the shop is beautiful, the premises are beautiful, we are near the SAQ Restauration, same thing for our distribution center which is not very far. It’s a neighborhood that looked a bit more like, a clientele close to the natural wine and cocktail, and many of our guests who came from this neighborhood and I spent a lot of time myself, so everything made sense. And even for the daily life of the team, it is a local that is fairly central, easy to access.

For us, the challenge to the store, which will be added an event component shortly, and our warehouse offices. We had to have a simple place, and easy to access for the catering people.

Often, people think that Alambika is a glass shop, but I look here, and it’s much more than that! 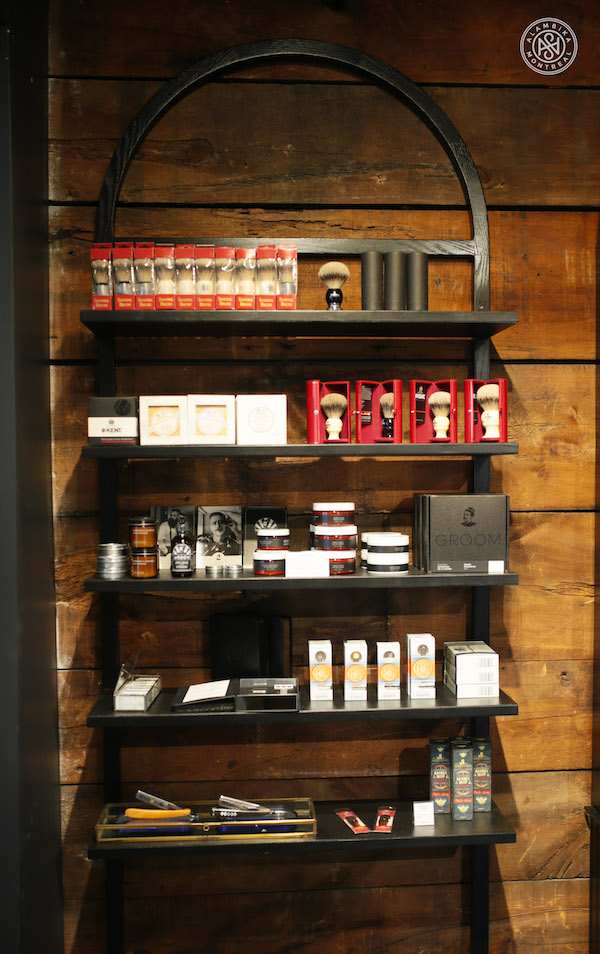 In fact, Alambika, I’m lucky, because it’s a bit of a front for all my vices and hobbies. This is the shop I would have liked to cross on a street, go home and buy everything. I’m lucky, because what I like, I’m not the only one to find that cool. There are many other people who like it. Little anecdote, when I was in the last day at the old shop, there is a guy who comes in and yells, “OMG! Where have you been all my life? ”

But the idea behind the shop is that often people who will love to drink will also like to eat well, have fun, will love the beautiful objects and will understand that instead of to stretch buying cheap, you can invest. A good knife is important, you use a knife all your life, every day, there is no big investment that will serve you as much in life, and there are excellent at $ 150–200. And a block of crappy knife is going to cost you the same thing and regardless which one you take, they are all crappy. Anyway you almost always take the same and you find yourself paying a $200 for a shit knife, while if you choose the right knife and all, it will stay sharp much longer and your work will be much more enjoyable So in our shop, there is nothing vital and useful, but it’s just the best version of things we already have. Ikea stuff that we had when we were 20 years old. 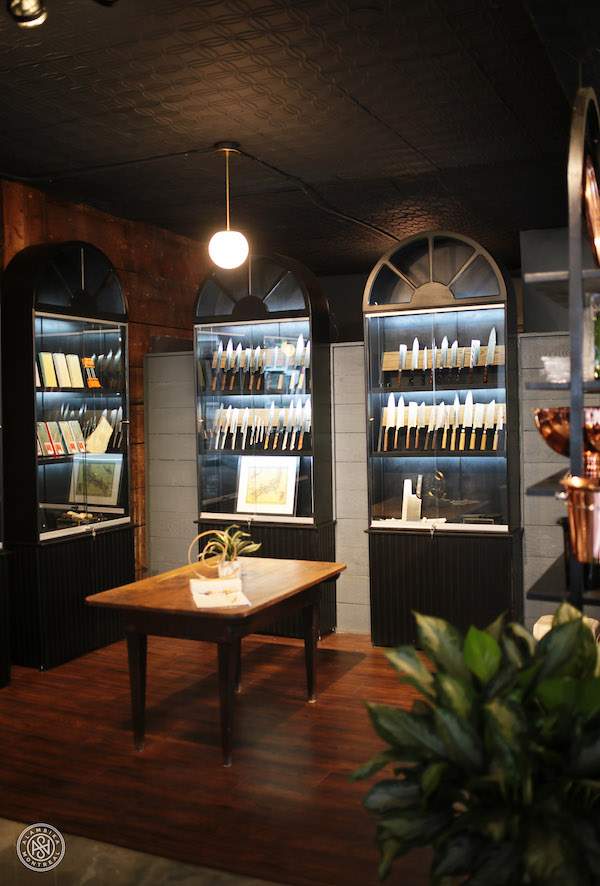 The bottle of wine you buy, how can you make it better without paying double? Simply with a set of glass that looks great, and already your experience changes a lot. With good knives, making you eat is less of a chore. It’s turning our daily actions into much more enjoyable actions. We’ve got some shaving stuff, because I started sharpening knives because I was tearing my skin out because of the 12-blade razors. And, I came across forums, and it was the beginning of the business, I restored razors and a knife sharpening service. Now I have an assistant doing this full time. 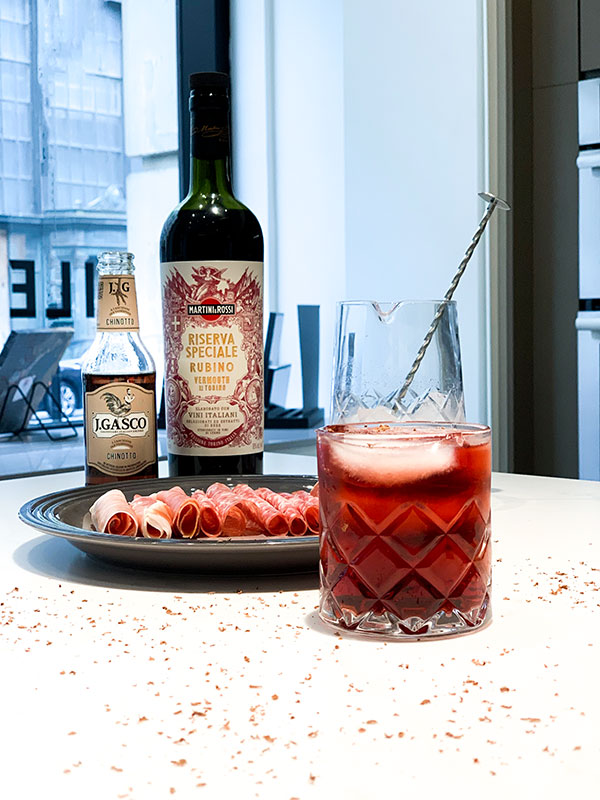 It gives people the opportunity to discover a lot of products and it also gives me the chance to work with a lot of craftsmen. We develop designs with blacksmiths, cabinetmakers, glassmakers, and we even have a juicer that we developed with a friend designer who is at the Montreal Museum of Fine Arts in a retrospective of the art of the table in Quebec. And we have glasses to mix with gold leaves and everything. By touching several mediums, we have the opportunity to touch everything.

And you are not caught selling a single product for which the application could end overnight.

Absolutely, it allows us to evolve. The challenge is to be large enough to offer several products, but without becoming a big-box store. The number of times I’ve been asked why I do not fit a particular product, I always refused, because I do not want to be a destination for everything, but a little more for everything cocktail universe.

``So in our shop, there is nothing vital and useful, but it’s just the best version of things we already have`` - Jean-Sébastien Michel, CEO, Alambika

When we look at your glasses, we see glasses that we have seen in a few places. 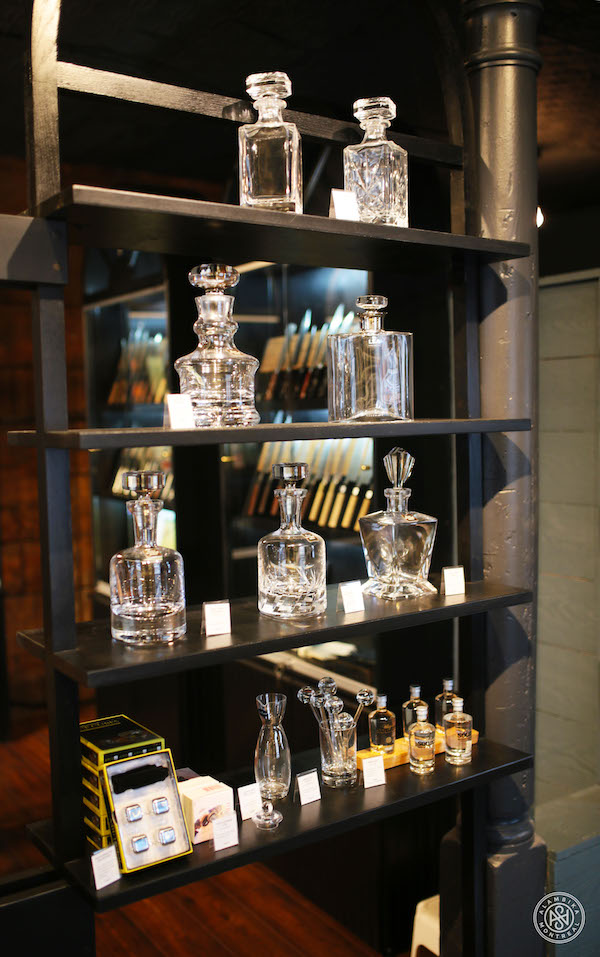 Yes, we are lucky enough to work with neighborhood bars as well as Toqué, Auberge Saint-Gabriel, Alo in Toronto, the different Fairmont, the Four Seasons of Montreal, even coffee shops in Sept-Îles, is pan-Canadian from Vancouver to Alberta, etc. We are a partner for Made With Love and we are now partners with Speed ​​Rack, the women’s cocktail competition against cancer. We are developing signature cocktails for the Musée des Beaux-Arts, for the Opéra de Montréal, etc. We participated in the Women with Knives event at the Phi Center who were selected to the Lauriers.

And if we talk about your most popular products, which ones are they? 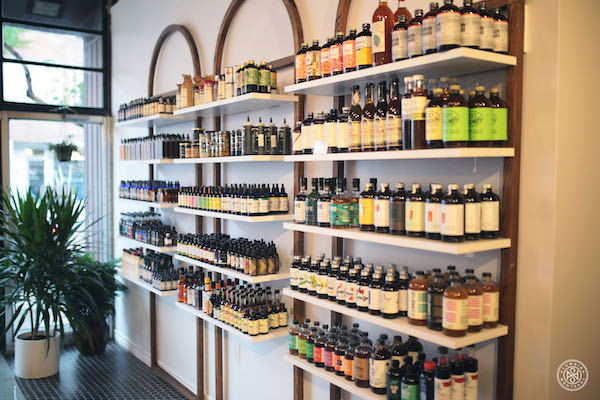 It’s quite diverse, because each category works pretty well, all our ingredients are in permanent tasting at the shop. So every person who visits us will leave with what he likes and not a bottle at random or the most beautiful label. The tonics are a classic, Lehmann versatile lenses are beautiful, are resistant.

What is the difference if we talk about Lehmann and Riedel? 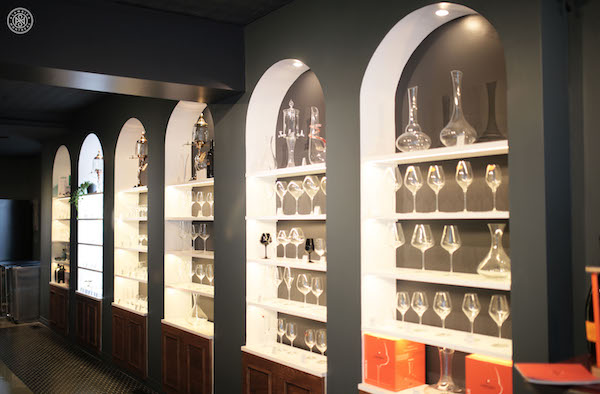 Riedel is a German brand, and Lehmann is French, based in Reims in Champagne, for 6 years, it is a young company, they are very, very dynamic. They do not invest in big packaging and advertising in the extreme. They have therefore cut into fla-fla marketing and work directly with the winemakers and supply all the champagne houses of importance in France. When we see events of Veuve Clicquot, Dom Perignon or Roederer, they are all their glasses. And they work directly with the restaurants, the models are developed with the sommeliers, the ranges are simple, the prices are good, it is not for nothing that we manage to enter the bars and restaurants with that, because the value for money and there. And in honor of their love for our city, they developed the Montréal cocktail cup, mouth-blown and handmade. The signature glasses of the VIP evening of La Grande Tasting in Montreal, they are Raw Wine in Canada, also Wine by Nature in Ottawa. We are trying to help them to position themselves well, thanks to our distribution component. We collaborate with several shops other than Alambika.

What’s coming for you? 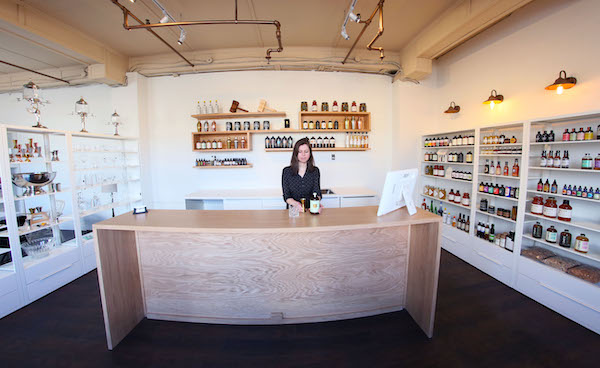 The Pro Atelier at their Headquarters
Photo: Alambika

We have an event and course component that will be set up at the boutique, new lines of ingredients coming to the store, 100% Quebec accessories, festivals, events like the Tikivernale that we created with the A3 Quebec and for all that is to highlight the people of our industry, and a cause that is close to my heart is to help bartenders, who often spent 30 years, want to do something else so help broaden the range of options for bartenders, whether through teaching, or high-quality events where experience and contact with people is as important as effectiveness. And that it is not because you have reached a certain age that you are finished, far from it. And help bartenders develop skills that will be more marketable later.

It’s really a very nice initiative, it was a pleasure to talk. And see you soon in a bar or event.