Drew Mayville of Buffalo Trace: The Quest for the Perfect Bourbon 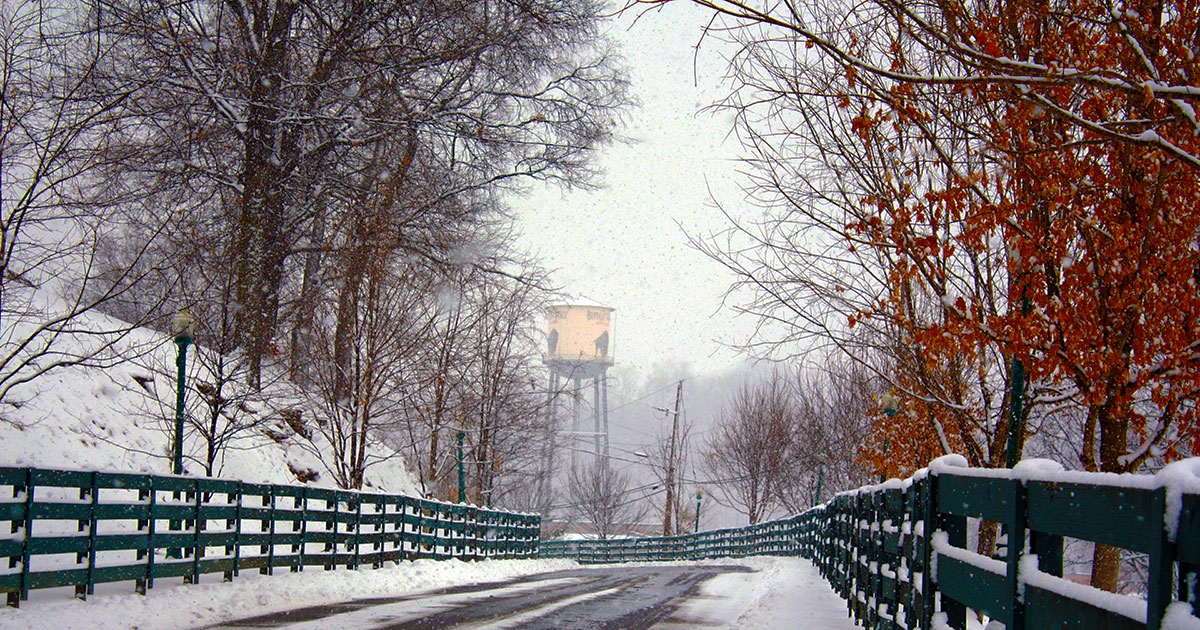 While the holiday season is always more festive and often colder, the meeting of Drew Mayville, master distiller of Buffalo Trace, Kentucky’s delicious bourbon that recently won the 2019 gold medal with 91 points at Beverage Testing Institute and the 2019 silver medal at the New York World Spirits Competition, for Maison Sazerac, was timely. Here is a brief summary of my meeting with Mr. Mayville.

The Meeting with Drew Mayville of Buffalo Trace 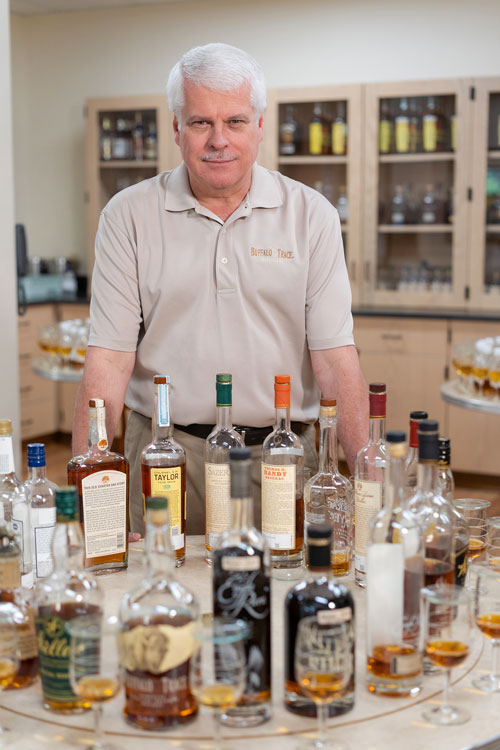 On a Thursday morning in October, my appointment with Mr. Mayville, who holds a Bachelor’s degree in Science from the University of Waterloo in Ontario and has a track record of more than 40 years in the field of spirits, including stays with Seagram’s and other major players in the industry, were held at the Marriott Chateau Champlain. Mr. Mayville knows Montréal very well, since he lived in the West Island at the time of Seagram’s. And the new Sazerac distillery in Old Montréal, not yet open to the public, is a tribute to the Seagram’s legacy..

For the past 15 years, Mr. Mayville has been in charge of quality control for all Sazerac products, including the jewel, the Buffalo Trace bourbon, and some other products I’ve had the chance to taste 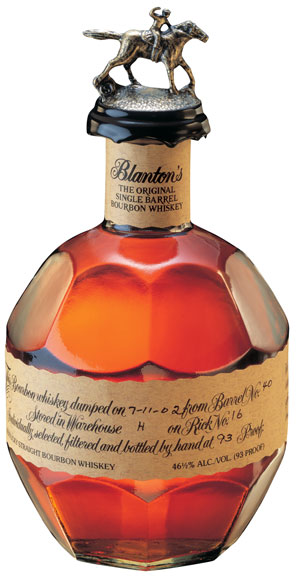 We start with Blanton’s, while I ask him the process of making different bourbons, Mr. Mayville get out of his bag, a barrel with different little things inside, because for their different recipes, they use new barrels of oak, unlike Canadian whiskeys and others, and this for all the bourbon-based recipes, and it is mandatory by law, bourbons must be made by at least 51% with corn. That’s where it’s from this fruity and sweet side that is found in bourbon, then comes rye, which gives the spicy and peppery side and the last ingredient is barley malt, for the fermentation. “The majority of the taste comes from corn and rye, but also from the barrel, because it is not only a barrel, it is a flavor for the distillate, and 95% of bourbons will be made this way.

In the other 5%, rye is replaced by wheat. The most popular wheated-bourbon is The Pappy Van Winkle [Also owned by Sazerac].“Another essential ingredient for bourbon is water,” told me Mr. Mayville with his water bottle, another important thing, is the yeast, and finally he takes out a watch from his barrel and tells me that the most important thing is time, nothing can replace the time to age a bourbon.

For Blanton’s, it’s a bourbon made principally from rye to compare with Buffalo Trace, here we’re looking for the spicy side of rye, the sweet and fruity side of corn, and the aging of the product. ‘When you smell the product, it tickles the nose with its spicy side, with vanilla, very soft. And to taste, it’s corn and its fruity sweet that comes first and then the pepperiness side of rye and a final, dry with the taste of oak, we see very well the balance of the product. Also, people collect corks, since you can form the word Blanton’s and see a horse race, from beginning to end.’

How to taste it?

I asked Mr. Mayville, since we are in a tasting, what’s the best way to taste these different products, and him to answer: ‘The way you will have the most pleasure to taste them is very personal. But to really appreciate the product, I advise them to taste it naturally.’

The Blanton’s in SAQ

The Blanton’s in LCBO

While we continue the tasting, from the lightest to the most powerful, to go up, the next is the Buffalo Trace, the jewel of the company. Created in 1999, is a must to try, the name comes from the buffaloes that left their traces near the river where the distillery is. “When you feel it, it reminds you of the richness of vanilla, more balanced, and to taste, it is a little more molasses, brown sugar, a little mint, even chocolate, on the final, we find this oak flavor, always in balance. 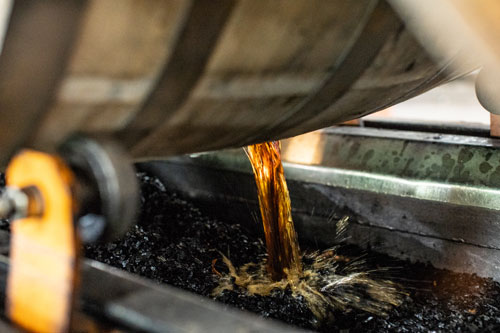 For people who prefer products a little lighter, it is really excellent in cocktails,” as in that the mixologist Jerome Laflamme did for us in the magazine. The Buffalo Trace mix is ​​about eight years old to keep the constancy. The demand for this product is really huge, so much so that they have to constantly need to add warehouses.

The next product is Sazerac Rye, which is not a bourbon, and “the difference is huge, where as usually corn is the main ingredient, it is rye. When you smell it, it’s the spicy-peppery side that comes out first. There is a little less fruity sweet in the latter and as it is six years. If you take it directly from the barrel, without aging, it is the Thomas H. Handy Straight Rye Whiskey, the third-best whiskey in the world in 2019 according to Jim Murray’s Jim Murray’s Whisky Bible.”

The Origin of Sazerac

Before going to the last product, I get a little information about where the name Sazerac comes from, which is more than a cocktail, the name dates back to the 1600s in France from a family that made cognac, and then the family settled down in the years in New Orleans in the 1800s. The cocktail Sazerac is also very popular in New Orleans, where it was the first cocktail in the United States, which was made from cognac. There is also the Sazerac house, opened a few weeks ago in New Orleans where they do several tastings of products.

The Sazerac Rye in SAQ

The Sazerac Rye in LCBO

Finally, we are enjoying a product that should be very popular during the holidays, the Bourbon Cream, based on Buffalo Trace. The problem with Bourbon Cream is that as it is made with Buffalo Trace, it is produced in limited quantities because of the availability of bourbon. According to Mr. Mayville, the product does not need to be cooled, and many people like it with root beer to make a floater. The important thing for them was to have the taste of bourbon in the bottle, and it’s a good start for people who are more reluctant to try bourbon. Bourbon Cream is the idea of ​​Mr. Mayville, one of his creations at Sazerac, where he wanted people to have an alternative to the bourbon in the Sazerac range.

It’s just a delight (too!) easy to drink, and only 15% alcohol, perfect for an afternoon in front of the fireplace or a Christmas movie. It’s relaxing, it’s perfect on ice cream, pancakes, etc. If you find it, buy it! You will love it. Discover our coffee cocktail recipe with Bourbon Cream

The Bourbon Cream in SAQ

I then asked Mr. Mayville what product he would offer as a gift for the holidays, but his suggestions can be good at any time.

He tells me that Blanton’s is really interesting, especially because of the shape of its bottle with the racehorse, his rarity and it’s just a beautiful bourbon. The Buffalo Trace is still a good choice, unique, very interesting too, depending on what people like about bourbon.

The Gorky Park by Nicolae Arman of The Coldroom