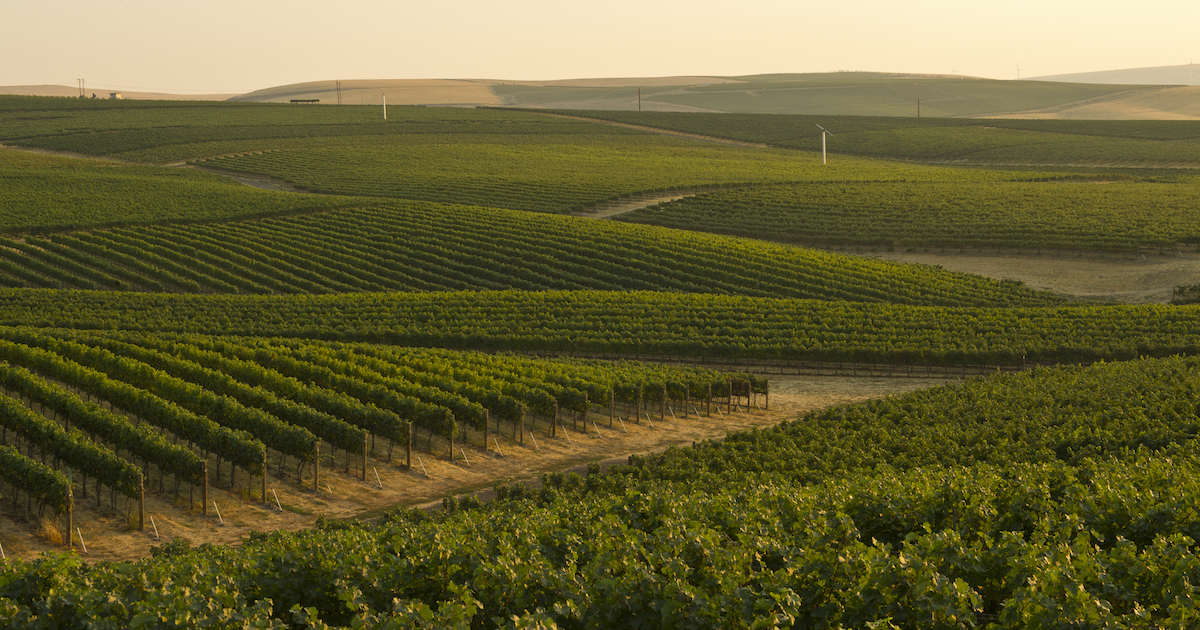 I have to make a confession right off the bat, I did not know the Washington area very well until last year. I admit to being more of a fan of Oregon, but it’s during my meeting with the people of Columbia State Winery, including oenologist Juan Muñoz-Oca. So let’s take a look at this part of the United States with The Wine Regions: Washington State –  invited region of La Grande Dégustation de Montréal.

As Doug Marshall of Washington Wines explained to me, it’s been a long time since he made wines in the region. Washington’s first grapes were planted in Fort Vancouver by the Hudson’s Bay Company (no matter how funny it was a Canadian company that started planting in that area) in 1825. In 1910, wine grapes grew in many areas of the state, following the path of early settlers. French, German and Italian immigrants pioneered the first plantations. Hybrid varieties arrived at nurseries in the Puget Sound area in 1854, and in 1860 grapes were planted in the Walla Walla Valley.

Large-scale irrigation, fed by runoff from the melting snow of the Cascade Mountains, began in eastern Washington in 1903, unleashing the dormant potential of the land and its arid and sunny climate. Italian and German grapes were planted in the Yakima and Columbia valleys and the area of wine grapes quickly expanded in the early 20th century. The climate of the region adapts better to these varieties.

In 1914, important vineyards appeared in the Yakima Valley, including the vineyards of W.B. Bridgman of Sunnyside. Muscat of Alexandria vines on Snipes Mountain dating back to 1917 are still in production and are considered the oldest in the state.

The arrival of Prohibition in 1920 put a stop to the production of wine grapes, but ironically, it may have helped to spark an early interest in home winemaking. At the end of Prohibition, the first Northwest winery was established on Stretch Island in Puget Sound. By 1938, there were 42 wineries throughout the state. 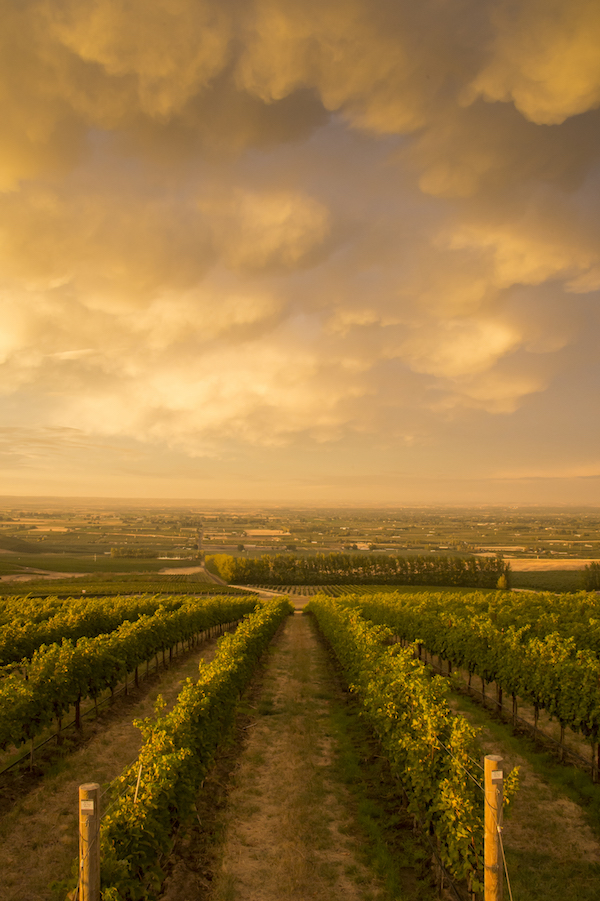 The first commercial scale plantations began in the 1960s. The efforts of early growers, predecessors of Columbia Winery and Chateau Ste. Michelle (whom we talked about earlier), caught the attention of the wine historian Leon Adams. Adams in turn introduces pioneering oenologist André Tchelistcheff to Chateau Ste. Michelle. It was Tchelistcheff who helped guide the early efforts of Chateau Ste. Michelle and framed modern winemaking in this state. The resulting rapid industry expansion in the mid-1970s is now riveted by today’s frenetic pace, where a new winery opens almost every 30 days (even every week according to Charles LeBouthillier de Ste Michelle)! It’s still incredible!

The trend for quality wine production by some visionary winemakers and farmers has become a respected and influential industry of more than $ 4.8 billion in Washington State. Washington wine is available in 50 states and more than 40 countries globally. Washington ranks second nationally for high-end wine production and over 50,000 acres * are planted with vinifera grapes.

More than 40% of these vines have been planted in the last 10 years as the industry grows rapidly. Washington State Wine Commission, a unified marketing and trade association (the one that is present at the Great Tasting on Friday and Saturday), was created in 1987. In 2003, the Washington Wine Institute and its educational partners celebrated the investment of $ 2.3 million from the state (per biennium) to create 2 four-year and four-year degree programs supporting Washington’s growing wine industry. The program provides an educated workforce to meet the needs of the growing industry. A curriculum, continuing education and research strengthen the reputation of the state as a quality wine region. In 2011, the industry voted to increase its annual assessments to help fund a world-class wine science center at Washington State University, which opened in June 2015. The region is truly a leader in the field. wines and will undoubtedly be the next California.

American viticultural areas, or AVA, are wine-growing regions in the United States. Their limits are set by the Bureau of Taxes and Trade in Alcohol and Tobacco (TTB) and established at the request of wineries or other petitioners. Washington State currently has 14 AVAs. 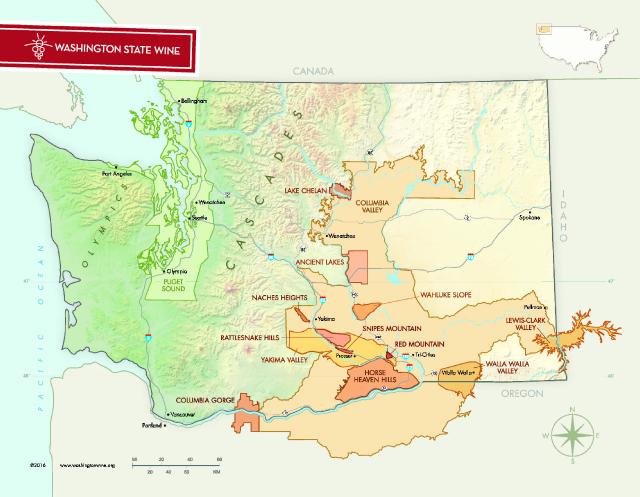 Washington State is an upscale wine region in the northwestern corner of the United States. Although it is a relatively young wine industry, it is the second largest producer of wine in the country behind California and ranks among the best wine regions in the world. 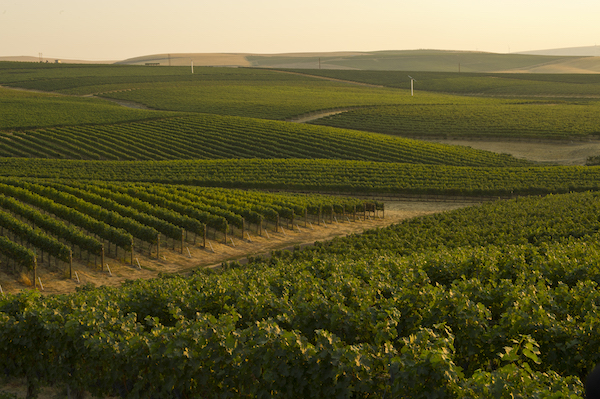 With 50,000 acres planted, the state has the geography and ideal conditions for growing premium vinifera wine grapes. Mainly grown on their own roots, which support healthier plants, the vines produce grapes of consistent quality, giving strong vintages year after year. While Washington’s winegrowers focus on Riesling, Chardonnay, Cabernet Sauvignon, Merlot and Syrah, the region also produces a wide range of other spectacular white and red wines.

From Italy to Australia, winemakers around the world have chosen to settle in Washington, where they can create wines that reflect the unique characteristics of this region. Their handcrafted wines are highly valued by regional, national and international critics for their consistent quality. Many of them have received ratings from 90 and more major wine media. Overall, Washington receives a higher percentage of high ratings from major wine publications than other major wine regions.

As the state’s fourth state fruit crop, Washington’s wine industry is a major contributor to the long-term preservation of Washington’s agriculture. The industry is committed to sustainable farming practices and conservation of water resources. Washington is also home to certified organic and biodynamic vineyards.

Pale yellow colour of low intensity. The nose is intense with fruity and floral notes. It’s a riesling with a nice acidity, faithful to the Riesling of Washington State. We find the perfumes perceived on the nose, We also find superb flavours of lime and white flowers. In the final, it is a very supple and sustained mouth that brings us this wonderful Riesling.

This wine is beautiful. With its deep ruby red colour with purplish reflections you will quickly see its freshness and youth. The nose is very expressive, rich and reveals very pleasant scents of cherry, plum and spices. Tender in the mouth, silky with tannins present, but refined, vivacity balanced by an enveloping and greedy texture. A finish with an explosion of fruity flavours such as blackberry and cherry, but also thyme and oregano. Long and persistent in the mouth and pleasant. A must.

Young fresh wine. Very expressive on the nose, rich and reveals scents of cherry, plum and spices. Tender in the mouth with tannins present, but refined, vivacity balanced by an enveloping and greedy texture. The finish evokes a myriad of fruity flavours such as blackberry and cherry, but also thyme and oregano. We find a persistent and pleasant length.

A wine of the Top 100 Wine Spectator in its first year, it says a lot. This wine has a refined nose with aromas of leather and cherries that are true to Cabernet Sauvignon in Washington. The flavours are layered with hints of blueberry jam, pomegranate and chocolate. The texture is rustic, but silky, with a unique and tasty finish. A magnificent discovery.

A delicious wine with a deep purplish red colour characteristic of Washington Syrah. Powerful nose with scents of laurel, blueberry and wood. We find a wonderful freshness with fleshy tannins. On the palate, it is reminiscent of toasty oak, black fruit and violet flavours. You will appreciate a rather persistent final.

Columbia Crest created the H3 lineup to commemorate the legacy of the Horse Heaven Hills, one of Washington State’s 14 AVAs. This magnificent cabernet opens with flavours of black cherry and blackberry with a hint of currants and vanilla, complemented by notes of earth and minerals. The deep berry flavours lead to a sweet tannin cocoa finish.

Marchesi Antinori: Experience at Hoogan and Beaufort with the SAQ