Wines of Sicily: Dream Land for an Epic Winemaking Tradition 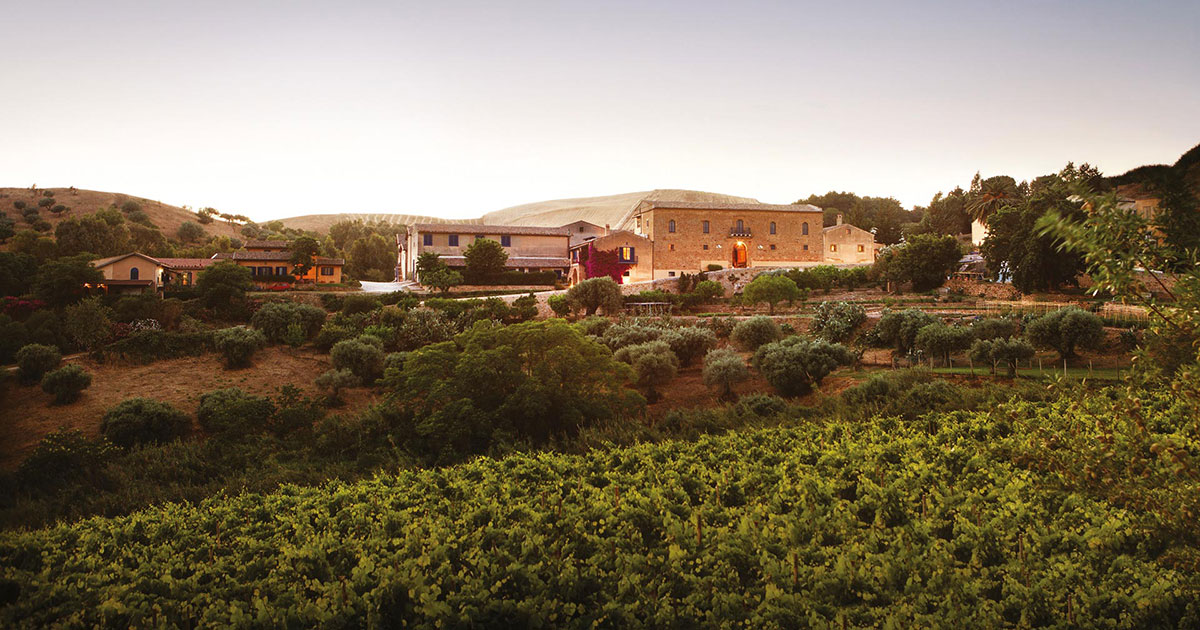 Sicily, the biggest Mediterranean island has a lot to offer not only on the wine scene but also produces food (30 certifications), chocolate, pistachios, olive oil, to name those few. It is truly a land of wonders! Come with me discover the Wines of Sicily.

The history of Sicily 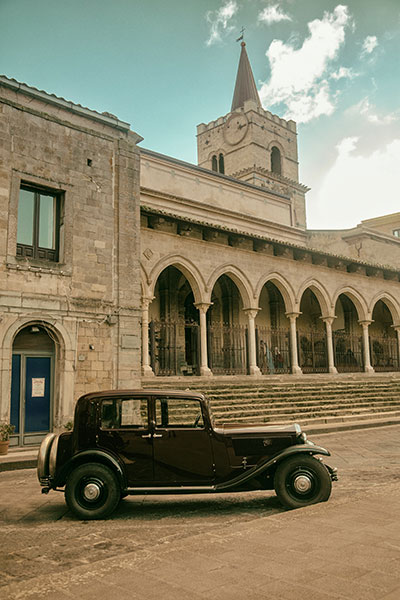 The oldest marks of human life found on the island are believed to date back to the thirteenth millennium BC, with some findings in the hinterland of Syracuse and the Niscemi cave in Palermo. The Phoenicians, who were able merchants and sailors, introduced vines to Sicily. The Phoenicians sold Sicilian wine, most probably sweet wines made from overripe grapes, throughout the Mediterranean. Sicily entered the historical era with the Greek colonization, which began with the foundation of Naxos and Syracuse in the middle of the eighth century BC; many other cities were subsequently founded by the Greeks, but also by the Carthaginians.

Thanks to the Greeks (eighth century BC), vine cultivation became more widespread, the Sicilians acquired expert knowledge in vine cultivation techniques. Consequently, the Roman Republic and Imperial Rome were quick to appreciate the quality of Sicilian wine: Julius Caesar was known to have a fondness for Mamertino, produced in the Messina area. 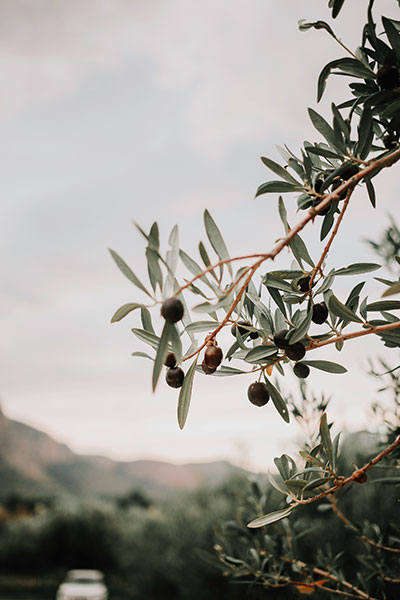 Later periods were influenced by a succession of different cultures, resulting in the development of viticulture on the island of alternating stages: from the Byzantines to the Muslims, who eliminated the production of wine. Subsequently, the great voyages embarked upon by the English fleets during the Napoleonic period supported the rise of wine making in the area of Marsala. The most recent history tells of a winemaking tradition that survived the economic crisis caused by Phylloxera (an insect who eats the roots, stem and leaf of the vine), which was widespread around the year 1880.

The geographical features are varied: whilst in eastern Sicily the Sicilian Apennines continue on from the Calabrian Apennines, central and western Sicily are home to isolated massifs. With the exception of the imposing volcano, Mount Etna (3,350 metres), the Madonie mountain range includes the highest peak of the island: Pizzo Carbonara (1,979 metres).

Sicily, known in ancient times as Sicania and Trinacria for its triangular shape, is the largest island in the Mediterranean Sea with a total area of 25,460 km². This island is connected with some surrounding islands and archipelagos, including Pantelleria. The region is mainly hilly (61.4% of the area).

The geographical features are varied: whilst in eastern Sicily the Sicilian Apennines continues on from the Calabrian Apennines, central and western Sicily are home to isolated massifs. With the exception of the imposing volcano, Mount Etna (3,350 metres), the Madonie mountain range includes the highest peak of the island: Pizzo Carbonara (1,979 metres). 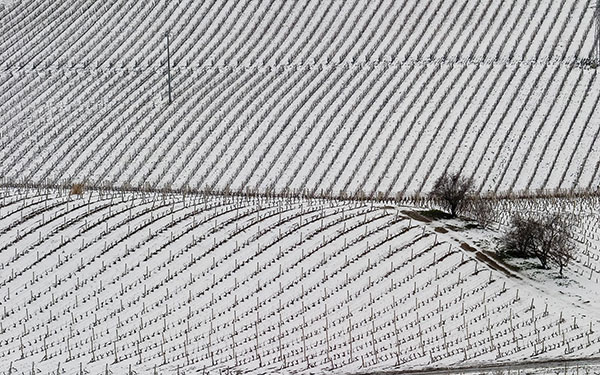 The main rivers of the island are the Salso (or Imera Meridionale) and the Platani, but it should be noted that in the summer, these rivers have extremely low water levels. Sicily enjoys a Mediterranean climate, with hot summers, mild and rainy winters and very changeable seasons in between. On the coast, especially on the south-west side, the climate is heavily affected by African currents, resulting in torrid summers.

The land on which the vines are cultivated is of varied morphology and constitution, the result of complex geological and tectonic events that have led to the creation of a particularly complex structure. The latter consists of a basal complex formed of deep autochthonous terrain, a series of distinct geotectonic units consisting of allochthonous terrain overlying the previous one and a post-orogenic complex inherent in recent autochthonous terrain. As far as the lithological characteristics are concerned, terrain of sedimentary origin emerges in much of Sicily. In terms of soil, the situation is very complex. 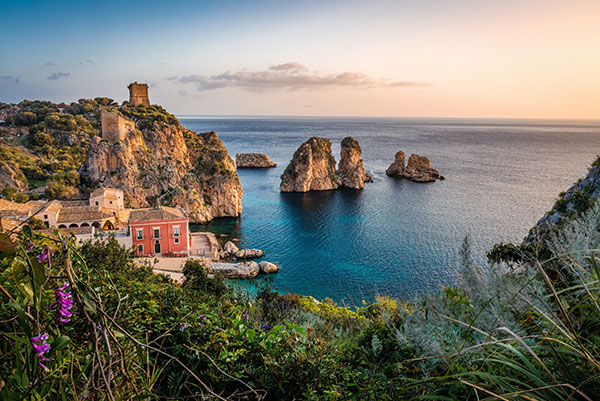 The Ibleo plateau is located south-east of the island and articulated in terrasses sloping down to the coast. The plains of Syracuse and Vittoria are well known in that area. Many watercourses known as “caves” radiate from the plateau, in this hot and dry area.

The northern coast is is high and the soil is made of limestone, tuff and clay. At the opposite, he southern coast is low and sandy up to Catania where it is high and rocky. The temperatures can be very hot, they vary from 8 degrees C to 30 degrees C.

The Hinterland of Sicily

The central portion of Sicily is mostly hilly, and the soil is predominantly marly, marble and chalky thus rich in mineral elements. The temperatures are even more extreme.

The northern side of the island starts from the East, with the most rugged part occupied by the Peloritani mountains. The Nebrodis follow and the highest peaks of Madonie are 700–800 meters above sea level. On the east side, the Etna, where wine grows is 1,000 metres high! The mountain region is rainier and somewhat less hot than the other regions.

The Protected Designation of Origin of the Wines of Sicily : DOCG, DOC and IGT

The Main Grapes of Wines of Sicily 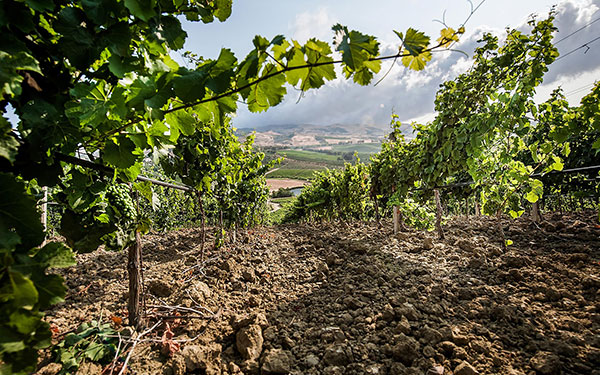 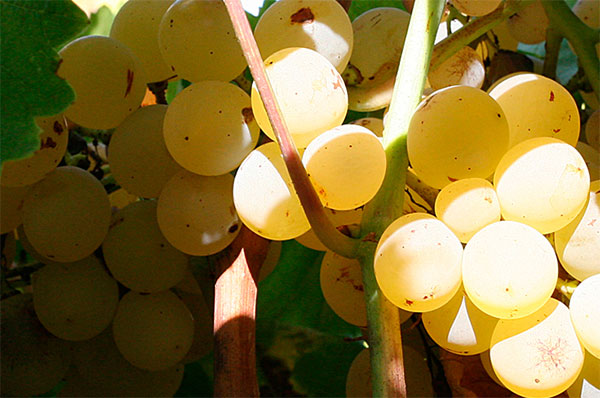 Its cultivation in Sicily seems to have started since the end of 1800. Recent studies have shown that Grillo is a vine variety produced by the cross between Catarratto and Zibibbo. With its grapes good white wines ready or suitable for maturing are produced. Its wine has a deep straw yellow colour, a good aromatic bouquet, with herbaceous, floral smells and with citrus notes, the flavour is sapid, with good acidity and balanced softness, excellent taste structure. 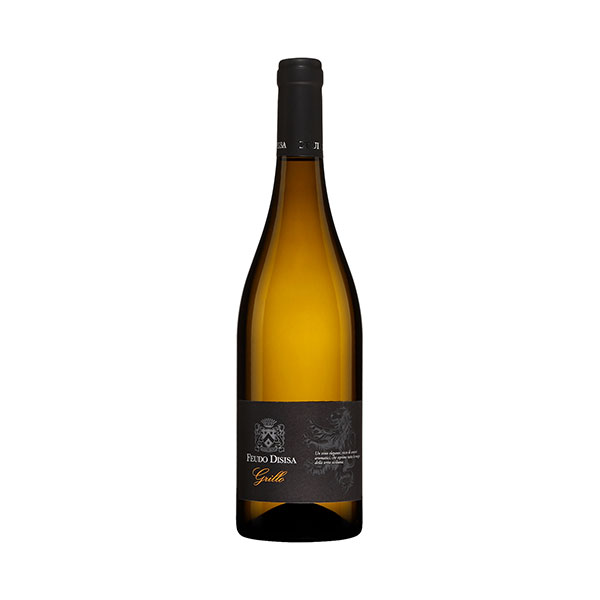 Wonder in the sunny Sicilia, this stunning white wine is fresh and offers flavours of yellow apple, pear, ripe lemon, peach. Rich and enveloping, it displays a certain character and would pair quite well with charcuterie, seafood risotto, scallops, mussels or a slice of Manchego. Such a wine speaks of Sicily, it is the expression of Italian passion.

Historical vine variety of the Etna area where it has been cultivated since ancient time. The grapes of Catarratto come into the composition of many Sicilian white wines. The wine has a straw yellow colour tending to golden, an aromatic profile with slight fruity smells and floral notes, the taste is characterized by the important alcohol content and the good structure, neutral taste, on average acid and tangentially soft. Widely widespread throughout the island, its cultivation is particularly concentrated in the provinces of Trapani and Palermo.

It is one of the oldest varieties of vine in Sicily. Widely spread throughout the island, it contributes to the production of many white wines. Locally, the grapes are also used for fresh consumption. It is characterized by a golden or amber-yellow colour, crisp, sweet (in Marsala) or dry and semi-aromatic pulp. Inzolia by a single-variety vinification gives a fine straw-yellow wine with greenish reflections, characteristic aromas of the vine variety (floral, peach, almond), the taste is quite sapid with balanced acidity and softness. 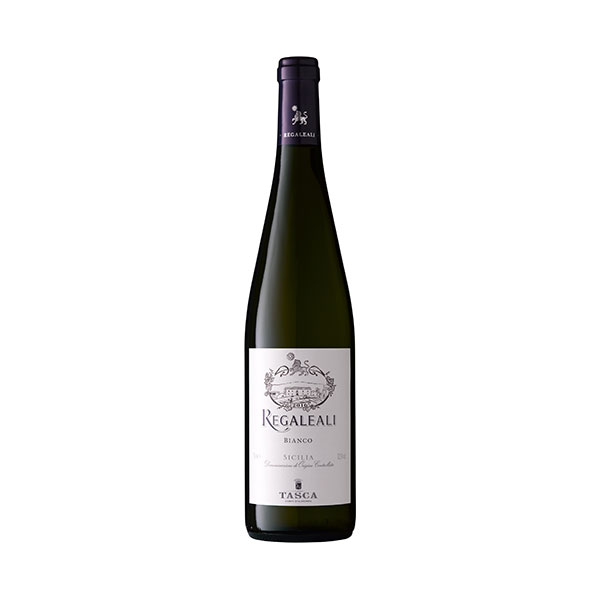 Aromatic and delicate like a bouquet of white flowers! A wine bursting with sunshine that radiates and dances in the mouth! An oratorio of fresh yellow apple, pear, Meyer lemon, stone fruits (fresh peach), and almond blossom! A delight with couscous or quinoa and mint salad with grilled peaches, white fish with a dash of lemon, shrimp or fruit salad. Tasca family started in 1830, now in certified sustainable viticulture.

It belongs to the large group of “Moscati” called by the ancients “Vitis Apianae” because they are sweet. Cultivated in Sicily presumably from the Phoenician times, this vine variety was used mainly as fresh or dried up table grapes, hence the name of the Arabic derivation “Zibibbo,” used in Sicily to indicate the grapes to be preserved dried up. It displays a distinctly aromatic flavour. Medium maturity. Traditionally vinified to produce sweet aromatic wines including the important straw wines. It is also used to produce dry aromatic wines and widespread in the province of Trapani. 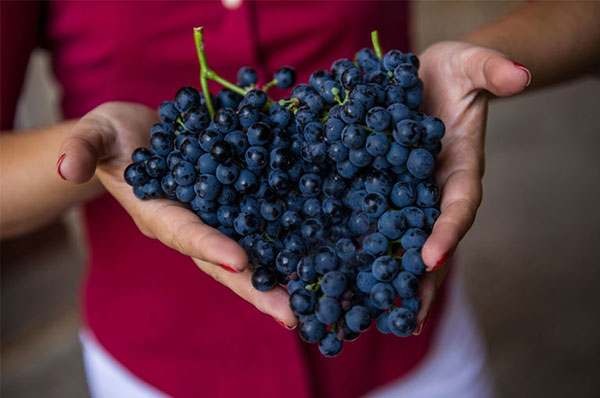 Quoted by Cupani (1696), the origin is still uncertain. The king of the Sicilian vine varieties is successfully cultivated in all the wine-growing areas of the Island, where it finds its highest qualitative expression. The wines are distinguished according to the cultivation areas of the vine variety are rich in personality, with a ruby-red colour, highly aromatic content with fruity, floral and spicy notes, excellent taste structure, tannic, full-bodied, balanced acidity and softness, harmonious in the complex. It is widespread throughout Sicily. 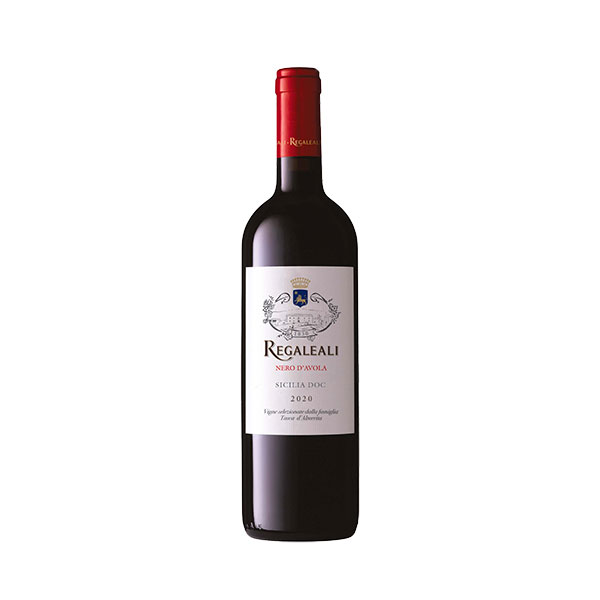 This Nero D’Avola has character and is elegant at the same time; we find flavours of cherry kirsch, purple flowers style potpourri, giving an amazing aromatic! Easy to drink and with a fresh acidity, it is rustic, earthy and balanced. A delight with Italian pasta, Milanese veal, mild Italian sausages or duck confit.

It is the most widespread vine variety in the Etna area where it has been cultivated since a long time. Presumably, it has links with the ancient wines of Etna celebrated by Homer and by the Latin historians. The wine is elegant and of great personality, with a tannic tendency, of ruby-red colour with garnet reflections, the excellent structure and the good aromatic set make it suitable for maturing.

Present mainly in the province of Ragusa and Syracuse, Frappato grapes processed with a single-variety vinification give an excellent wine of ruby-red colour not very strong and brilliant, high vinous, fruity and floral smells, medium bodied, balanced tannins, with a fresh and soft taste, very harmonious.

Its name recalls the posture of the hair which, like a cape, remove the bunches from sight. This grape has a fine ruby-red colour, a vinous and fruity bouquet, a good taste structure, to be preferred as a ready-to-serve wine. It is widespread in the provinces of Catania, Messina, Agrigento and Enna.

Typical vine variety of western Sicily where it has been cultivated since ancient time. Single variety vinification from a more or less intense ruby-red wine, with a vinous smell, on average-bodied, fairly tannic, harmonious overall, ready to serve. Cultivated to a limited extent in the provinces of Palermo and Trapani; it is also present in the province of Agrigento and Messina.

Discover our Wines section where you can find other great products to try!

A selection of great reds to warm up the January evenings!

A trio of great reds for the Holidays!