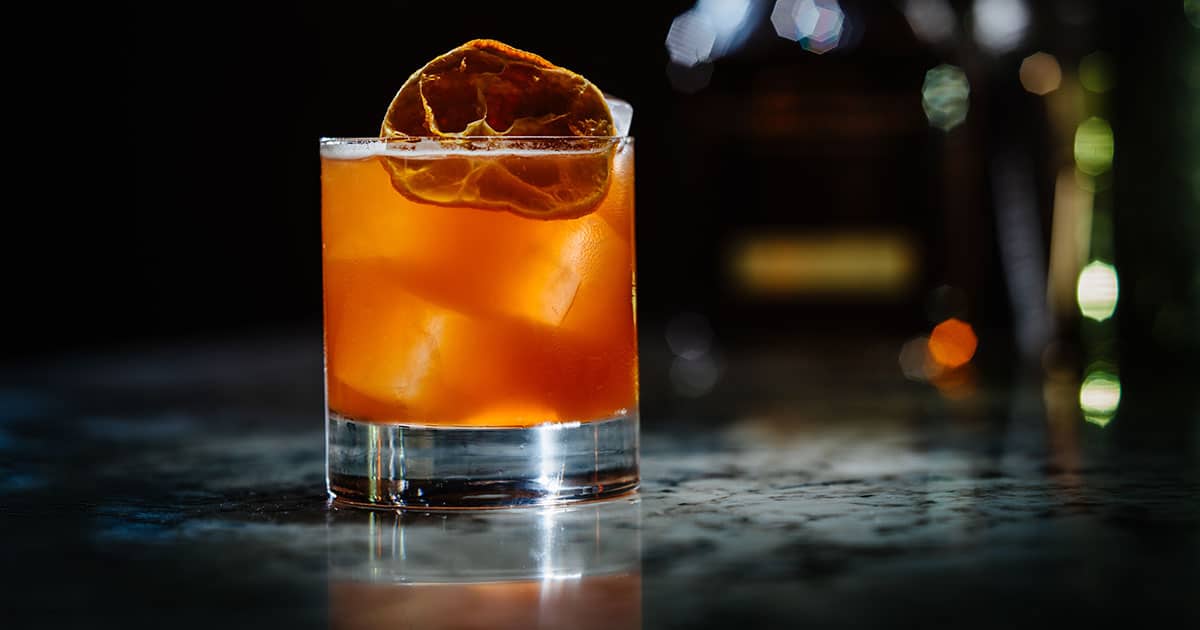 Cocktails and travel goes well together. But how often have you tasted a too sweet or too bitter cocktail on a beach? It’s rarely the best experience. In recent years, Fairmont Hotels have set themselves the mission of changing the game with the creation of their “Tastemakers” group in 2015, and their “Classics Perfected” menu that same year. In 2019, they have updated the menu and I spoke with Nader Chabaane, Director of Mixology at Fairmont The Queen Elizabeth’s Nacarat bar and founding member of “Tastemakers” to learn more about the new Fairmont Hotels Cocktail Menu. 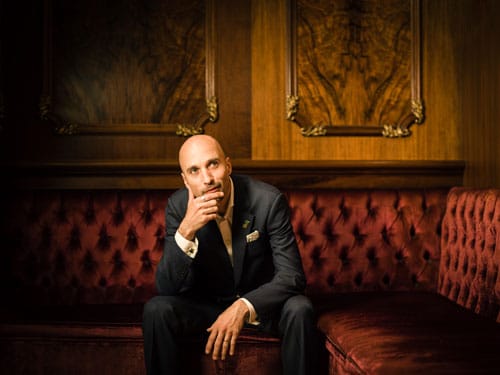 While the Nacarat of the Fairmont The Queen Elizabeth has really made its way into the Montréal bar industry since its arrival, I asked Mr. Chabaane if it was a challenge to put forward this local side with a menu that can be found at several places on the planet. He told me that it was not a challenge as such, since already: “Fairmont has in its current portfolio, and for a long time, hotels that were part of the history of the cocktail were created, such as Le Savoy in London with the American Bar, the Peace Hotel in Beijing, The Raffles in Singapore where was invented the Singapore Sling, and there are quite iconic hotels like The Plaza in New York where there was the Trader Vic’s in the basement, the Tonga Room in San Francisco (in the Fairmont), which is a tiki bar as there are rarely elsewhere and today, we are very proud to still be in the world of cocktails, since the renewal of the cocktail fifteen years ago and Fairmont’s desire was to continue this tradition and continue to evolve it…” 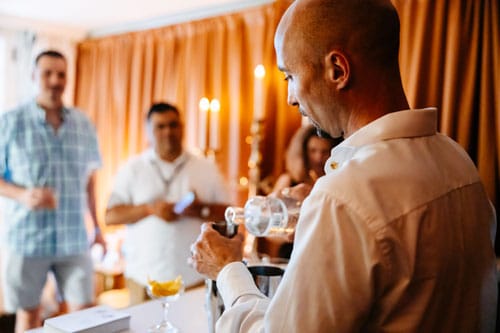 The Tales Of The Cocktails Tasting Room
Photo: Fairmont

The latter was created in 2014, Mr. Chabaane is one of the founding members with Grant Sceney of the Fairmont Pacific Rim in Vancouver and Eric Lorincz (formerly of Savoy), and the goal for them was to have a cocktail menu for all Fairmont Hotels on the planet. They created this menu in order to have a link between all these hotels in the world: “If the best Old Fashioned that you drank in your life is at Nacarat in Montréal, you will be able to drink it in China, in Vancouver, London and in all our different hotels”. At the time the program started, Mr. Chabaane was in charge of everything that was a cocktail at the Château Frontenac in Quebec, and he moved to Montréal in 2016, to hold the same position at The Queen Elizabeth since it reopened in 2016, and he told me that since its implementation, the demand has made “Classics Perfected” a real success. “The success was immediate because mainly the cocktails were very good and they still are. This is the first secret of success, no matter the cocktail”

” The biggest challenge was that they could be reproduced anywhere on the planet. As a bartender, we are used to being creative, and there, the exercise seemed weird, because we had a lot of constraints, which were geographical, in the sense that to make a cocktail with raspberry is cool, but in Kenya, there are no raspberries, and that’s a reality. The ingredients in one part of the world may seem very simple, while elsewhere it’s something that is almost impossible to find, simple things like a little fruit or a herb, and you cannot necessarily replace one thing with another. ”

The challenge for them was to put classic cocktails on the menu while perfecting them, hence the name Classics Perfected. It may sound pretentious to take cocktails that are 200 years old and say that we will make them better. This is probably one of the first things I said to myself. But, finally, I’m very proud to put it forward, because the exercise was very successful, one, by its constraints, and two, we will work classics.”

Their task began with a table of 400 cocktails, to arrive at a menu that has 6 to 10.  The success of several cocktails in the program, such as the Fairmont Old Fashioned proves it, the latter was the best-seller of the program for 4 years.

Mr. Chabaane told me that some cocktails have not passed the test to end up on the menu since their many different variations have not matched the original, as was the case of the White Lady, for example. Another thing that Tastemakers need to consider in creating the various cocktails is that some bars are smaller than others, in terms of space, structure or volume of guests, and they must even reproduce these cocktails on their menu without much difficulty, just as customers may want to do them again at home.

The Tastemakers, creators of the new Fairmont Hotels Cocktail Menu 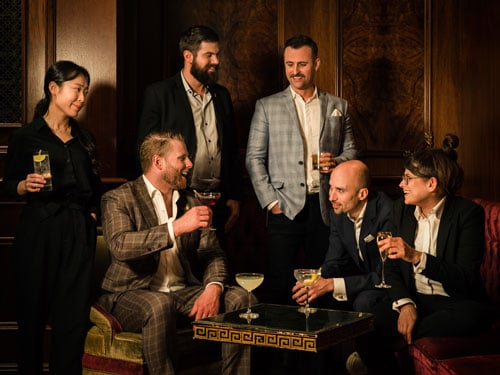 In 2015, it was the first time that the top Fairmont bartenders were reunited from around the world to ideate and perfect cocktails, together. In 2019, it was time to refresh. So Fairmont did it again. As in the past, the results are amazing― unearthing a new level of quality and craftsmanship.

As the new menu begins to be available in the various bars around the globe, the fairmontcocktails.com website has also had a makeover. Menus are there, cocktail recipes are also found, even videos on how to do them. It’s a way for them to bring the Fairmont home. “The program partners (Bombay Sapphire, Casamigos, The Botanist, Cointreau, Gentleman Jack, Mount Gay Rum, The Glenlivet, Grey Goose, Woodford Reserve and Veuve Clicquot) are essential because it is impossible to make good cocktails without good ingredients. It’s like cooking,” says Mr. Chabaane.

New classics in 2020 with the New Fairmont Hotels Cocktail Menu 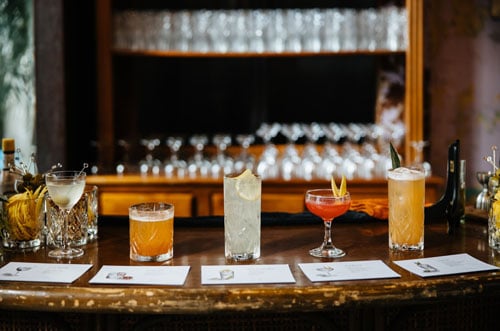 Last April, the group of Tastemakers met at the Plaza in New York for a week where they made a creative session on how to make the program evolve, and what they wanted for the future of the program. They chose the theme of the decades to tell the story of the cocktail, and Fairmont by extension. So they went from the late 1800s to the’80s. There are 10 cocktails on the menu that are still based on classics, and improved to make those classics perfect or “perfected.”

“To make these cocktails, we were very lucky, we had a beautiful setting to work. It was not only the Plaza, but also the entire Dead Rabbit bar for a whole day, including the team. To have a setting like that, it was really nice. The program was launched in New York in June at the Plaza. It was presented at Tales (of The Cocktails), a good success, we are the only hotel chain that makes an activation at Tales of The Cocktails), which surprises people who think it’s a brand (of spirits) who is behind.” 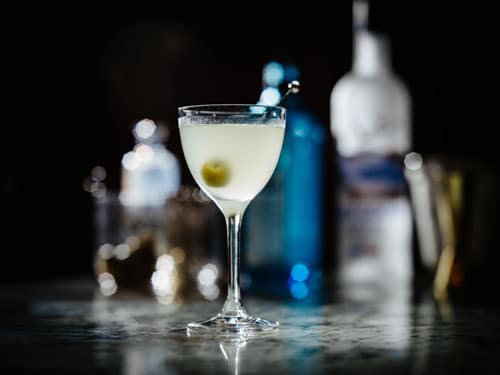 What can be found in this new menu? “We’ve developed different classics, We started in the early 19th century with the spritz, we often call the Old Fashioned as the first cocktail, but if you look at the story you can go a little further with the Spritz that was invented by the Austrians by mixing a little bit of soda water in a glass of white wine, which gave the Spritzen. There’s a new Old Fashioned (I’ve tasted it and it’s delicious).  So, our new Old Fashioned is a mix of Tequila and Scotch instead of Rum and Bourbon. We also worked a whisky sour (see cover picture). I love this cocktail because it brings a nice touch of modernity, because we no longer use lemon juice, only orange juice, which is more aromatic, but comes to have the same taste. We started from a fact that, even if we are very concerned about our environmental footprint, we realize that there is still a lot of waste whether we want it or not and we have a lot of packaging that we cannot live without, like the cases of alcohol that arrive in crates packed in plastic.”

“We are working to reduce our waste, as here in Nacarat, my goal is to be zero waste for 2021.” Next year, we will release a cocktail menu completely waste free, or a complete reuse of waste (they have the chance to be a big hotel, so they work with different kitchens).

To return to the cocktail, the orange is what we use the most, we zest enormously, we made 200 to 500 cocktails every night and those oranges that are zesty, we can put procedures in place, we’ll use the oranges the next day, we’ll have them, they’ll finish at breakfast, but honestly, it’s a lie that we make to ourselves. Here, the oranges for breakfast are not the oranges of the bar, and we know that 80% of oranges will end up in the trash. We decided to stop putting them in the trash (…) cons, these oranges, they leave a juice, the problem of orange juice is that it is too sweet and the acidity is low and that’s why it’s not widely used in drinks. For our whisky sour, we acidify our orange juice with citric acid so that it has the same pH as a lemon juice, so that it tastes like lemon in whisky sour, with an aroma and more, of the orange. It’s really a fucking good whisky sour. It may be harder (working that way) for some bars, but it’s also an example that you can work in a different way by working creatively with a lower environmental footprint.” 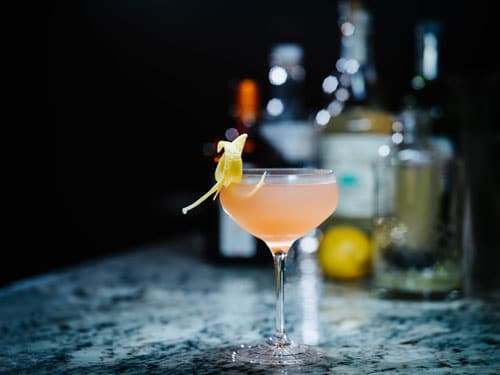 To find the perfect cocktails, it was an equal mix of 6 people, men and women, with different experiences, different tastes, different ideas to find something that most people can enjoy, and kinship cocktails is separated between 6 people. 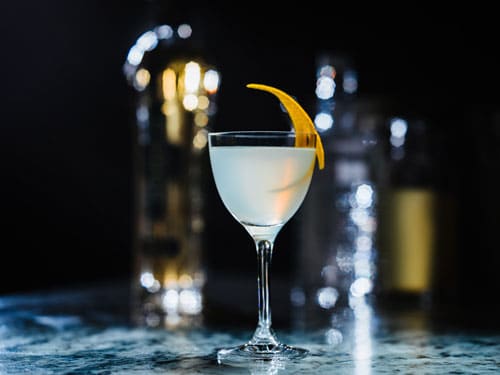 These cocktails will be implanted in more of 80 hotels and best practices could also be put in the other hotels of the Accor Group, which Fairmont is part of since a few years.

This menu is a bit of Mr. Chabaane’s legacy at the Fairmont, as it leaves the establishment for new projects. Here’s his cocktail, The Birds and the Bees.

The new cocktail menu is being rolled out and will be available at all Fairmont Hotels by the January 2020.. 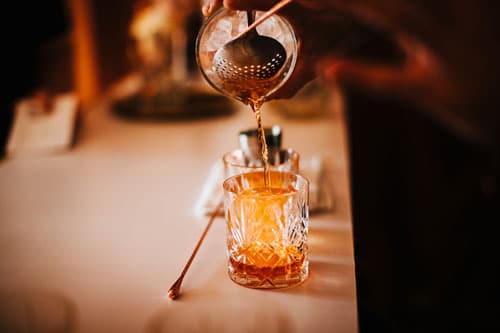